Dedicated in 1994, this monument honors U.S. Army Rangers and is located within Fort Benning, one of the largest Army installations and home to 120,000 active-duty soldiers, family members, Department of Defense contractors and employees, and veterans and their families. Fort Benning lies on the Alabama-Georgia border of the "Tri-community"-Columbus, Fort Benning, Georgia, and Phenix City, Alabama. Fort Benning continues to promote its mission to "produce the world's finest combat infantrymen." From its origins as a training post in World War I, Fort Benning has grown despite several times when it faced closure.

The welcoming sign to Fort Benning in Columbus, Georgia. The sign states how Fort Benning is home of the Maneuver Center of Excellence. 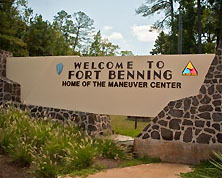 A recent aerial view of Fort Benning, which spans over 182,000 acres. 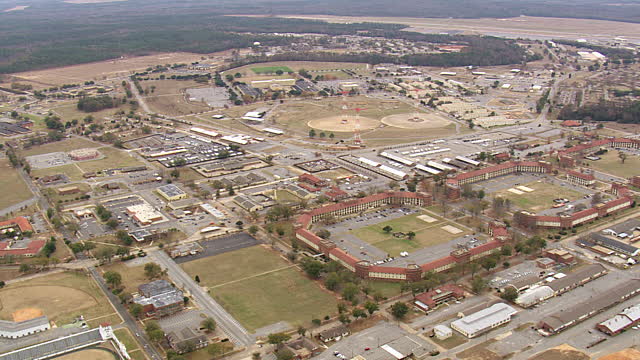 An aerial view of the NFL on FOX crew commemorating Fort Benning, Georgia on Veteran's Day 2018. 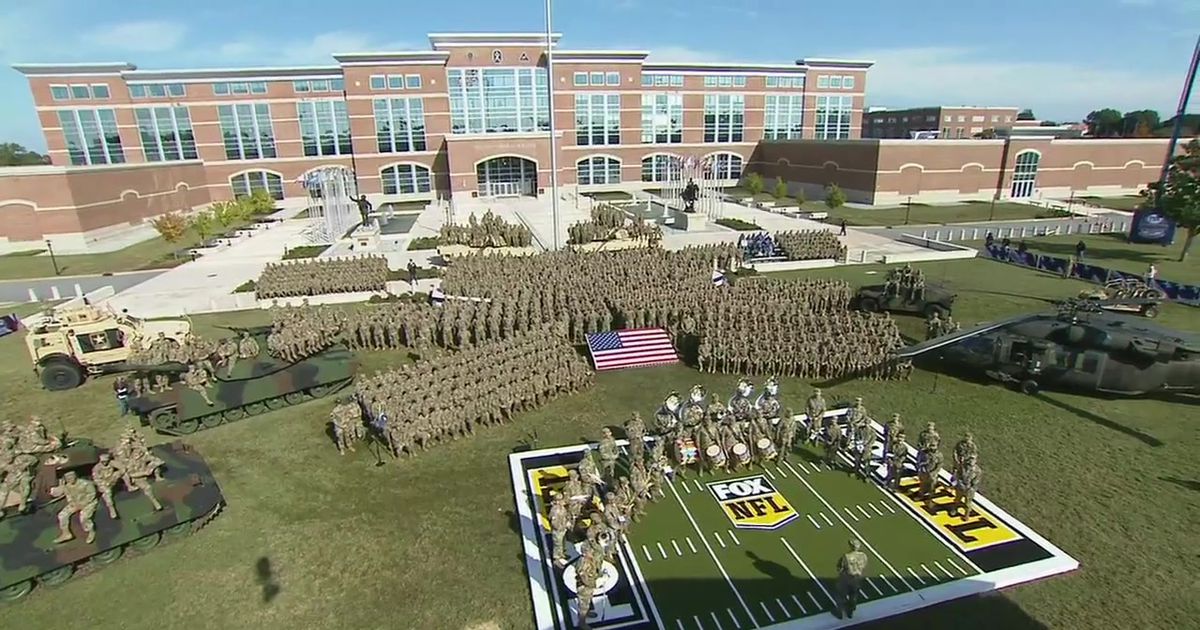 This sign states that this is where training for the infantry starts. 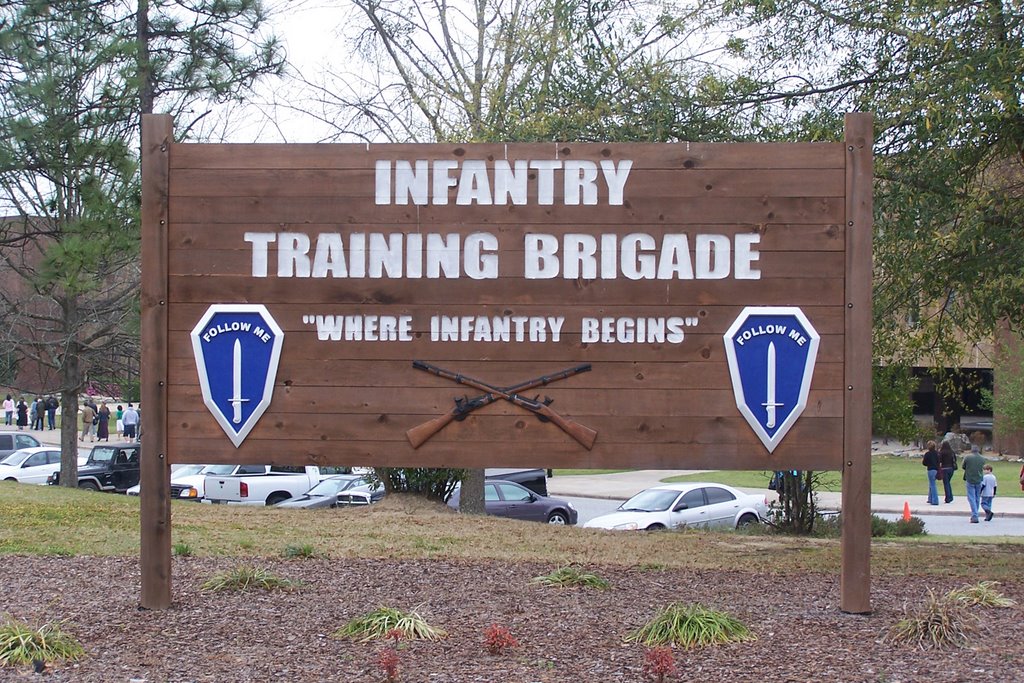 This memorial was dedicated in 1994 and honors members of the Airborne Rangers. 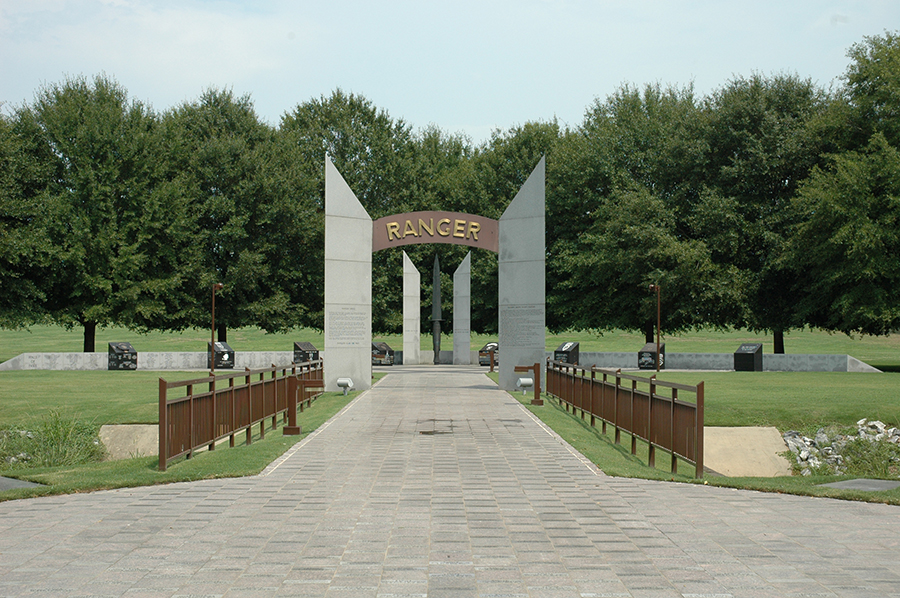 Fort Benning, previously Camp Benning was founded on October 7, 1918 to meet the manpower needs of General John J. Pershing’s expeditionary forces for World War I. Pershing’s required a force comprised mostly of infantrymen as well as artillerymen, but at the time both schools housed at Fort Sill in Oklahoma could not provide enough resources and room for the growing army.

On May 21, 1918 Colonel Henry E. Eames was appointed to head a board to select a new site for the Infantry School of Arms. At the time, much of the Army’s leadership desired the school be moved to an already existing camp such as Camp Gordon, GA, Camp Pike, AR, or Camp Lee, VA, or another location central to those sites. Many other sites would be considered, but most were disqualified for either poor climate or remoteness to population centers. The search soon reached Columbus, GA which quickly gained attention as its environment was prime for training. The area near Columbus offered nearly everything the Infantry needed, a mild year-round climate, access to transportation and varied terrain. Eames made the decision to house the new training site at Columbus Troops arrived on October 6, 1918, and two weeks later October 19, the post was named Camp Benning in honor of Confederate General Henry Lewis Benning from Columbus.

The leadership of Camp Benning’s first task was to provide soldiers with basic training during World War I. The war ended a month later and Camp Benning was closed shortly after the war. There was much debate over the closing of Benning and Georgia's congressmen pushed for Camp Benning to become a permanent military post. The post reopened in 1920 and was selected as the home of the Infantry School of Arms. During this time, Captain Dwight D. Eisenhower would serve at the post as well as 7,000 troops, 350 officers, and 650 student officers, all of whom were able to call Camp Benning home.

In 1922, Camp Benning was redesigned and earned the title “fort”, becoming better known as Fort Benning. From 1925-1935, funds were continuously frozen and released causing the construction and expansion of the fort. During the Great Depression however, Fort Benning would expand under federal work projects such as, Works Progress Administration (WPA), Public Works Administration (PWA) and Civilian Conservation Corps (CCC). It was during this period that Fort Benning drove Army leadership and became the true home of the infantry. In addition, Fort Benning was tasked with the re-examination of Infantry organization as technological advancements such as automatic guns, machine guns and tanks posed a great threat to America’s forces. It was concluded that the study impacted the organization of the infantry regiment with increased mobility and the creation of a weapons battalion.

During World War II, Fort Benning saw the activation of the 2nd Armored Division commanded by Brigadier General George S. Patton. In addition, the 1940s also saw the implementation of Infantry Officer Candidate School and a new approach of battlefield troop movement, paratroopers. To prepare this new tenant unit, Airborne school was put into place in 1942. From here the 555th Parachute Infantry Battalion was form, the first all African American unit of paratroopers. The 555th was the first of its kind and at the time was a huge milestone for the African American community. They would later be nicknamed the Triple Nickels. The Korean War would again energize Fort Benning after a period of demobilization following World War II. During 1950, Fort Benning would give birth to the Army Rangers, a special breed of fighting men with exceptional combat skills and the ability to perform under intense mental and physical stress. Fort Benning would again prove themselves in battlefield development in 1965 with the formation of the 11th Air Assault Division. Their purpose was to develop and test the Army’s new helicopter-based air assault tactics, which would prove to be successful. They would later become the 1st Calvary Division in 1965.

Today, Fort Benning is a continuously growing military establishment that supports thousands of soldiers, veterans, and military families. As home of the infantry, Fort Benning is one of the largest military posts in the world. While the fort is only open to members of the military, visitors can see exhibits and artifacts at the National Infantry Museum located just outside the fort's gates.