Skyline Drive is the only public road through the Shenandoah National Park that runs for 105 miles north and south along the crest of the Blue Ridge Mountains. There are four entrance gates connecting to Skyline Drive: Front Royal near Rt. 66 and 340, Thornton Gap at Rt. 211, Swift Run Gap at Rt. 33, and Rockfish Gap at Rt. 64 and Rt. 250. On a clear day, it may take three hours to drive the entire length of the Drive. Skyline Drive offers beautiful views of the mountains and Shenandoah Valley, many hiking trails for all ages, and waterfalls throughout these trails. Throughout the road there are seventy-five stopping points to take in the breathtaking views of the Shenandoah Valley to the west and the Piedmont to the east. Visitors to the park may encounter wildlife along the winding drive, including black bears, deer, and foxes, so the 35 miles per hour speed limit is strictly enforced.

View of the Blue Ridge Mountains for Skyline Drive.

View of Skyline Drive while driving. 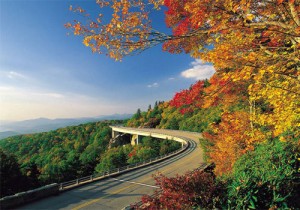 Shenandoah National Park’s Skyline Drive is a 105 mile road that winds north-south through Virginia’s Blue Ridge Mountains, from Front Royal to Charlottesville. Before Skyline Drive was built in the 1930s, settlers who made their homes in the mountains used narrow, rocky mountain trails to haul supplies and materials into the mountains via wagons and mules. When George Freeman Pollock visited one of his failed copper mines in the late 1890s, he decided to build a mountain resort near Stony Man Mountain, and Skyland Resort soon became a reality.

While not a successful miner or businessman, Pollock was a successful showman. His new resort drew in wealthy families who sought to escape the heat of Washington, D.C.’s summers, and he rewarded them with fancy bonfires, pageants, balls, and parties. Initially, Skyland’s visitors stayed for months at a time, as access to the resort required trekking up dangerous, unpaved mountain roads. But as automobiles became more common and roads to the park became more accessible, many visitors began making shorter stays of a few weeks and ultimately to a few days.

Construction of Skyline Drive began in 1931. The initial stretch of the Drive, from Thornton Gap to Swift Run Gap, passed adjacent to Skyland Resort, which became a concessionaire of the park. In 1933, during the Great Depression, President Franklin Roosevelt created the Civilian Conservation Corps, an agency that provided jobs to young, single, able-bodied men. They performed hard manual labor building roads, bridges, dams, parks, and other public works projects, including re-grading Skyline Drive, planting trees and shrubs (including the popular mountain laurel), fixing drainage, and building low walls and overlooks along the Drive to prevent erosion and to prevent falls.

Hundreds of thousands of visitors travel the Drive each year, with peak visitation during the changing leaves in the autumn. During this time, bears, filling up on nuts and berries for the winter, are a common sight in the trees. In the summer months, visitors can hike, relax at Skyland Resort, take a leisurely drive along Skyline Drive, camp, go horseback riding, see some of the park's many waterfalls, attend many Ranger-led hikes and programs, check out the interactive exhibits at the Byrd Visitor Center at Big Meadows (Mile 51 along Skyline Drive), and visit many of the park's historic buildings. In the winter months, visitors can go backcountry camping, snowshoeing, and hiking to see frozen waterfalls. Skyline Drive is open year-round, so visitors can enjoy the scenery and the trip in any weather.

Shenandoah National Park and Skyline Drive are always open. Parts of the Drive may close due to inclement weather.