This historic bank building was completed three years after the Panic of 1873 and stood as the tallest building in Syracuse for many years. The building was something of a novelty for area residents at that time, rising 170 feet and featuring the first elevator of its kind in the city. Visitors paid ten cents to ride the elevator both for the novelty of the experience and for an opportunity to see Syracuse from the top of the building. The bank opened as Syracuse experienced a population boom and at a time when the country was recovering from the Panic of 1873. The bank financed many of the businesses in this part of New York during the late 19th century, an era known to many today as the Gilded Age. 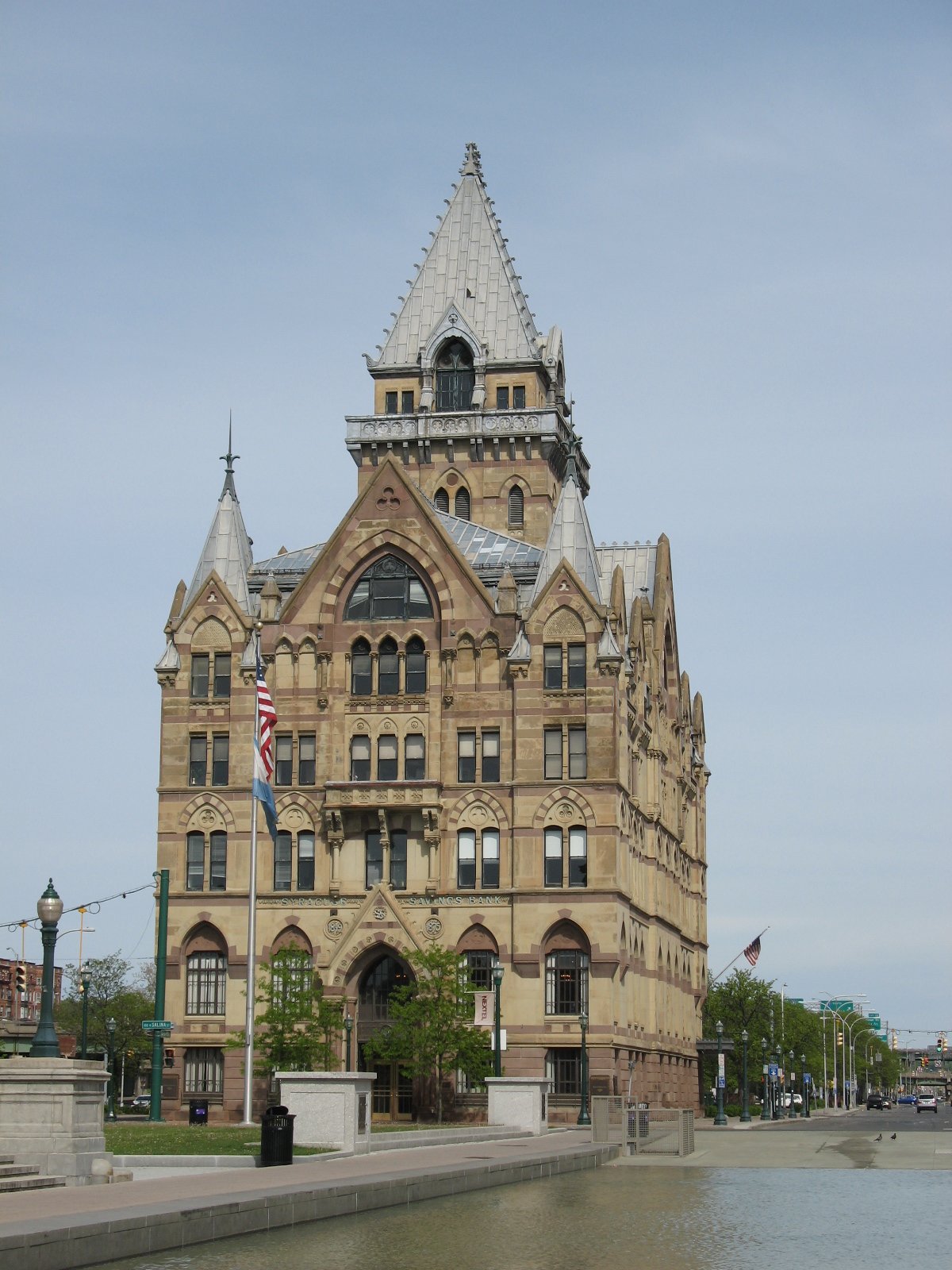 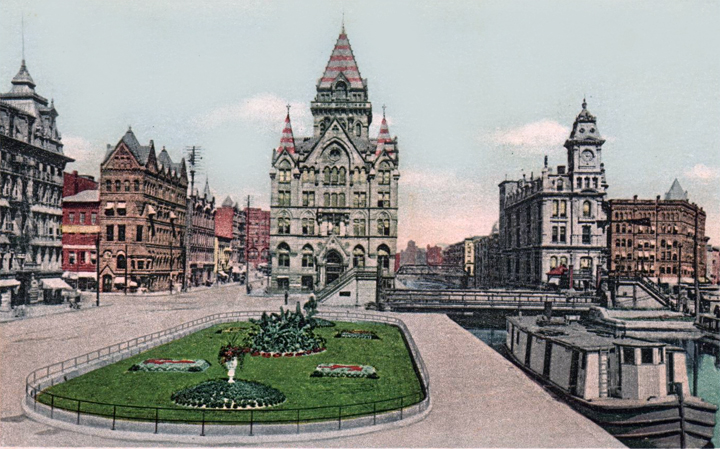 1886 Photo, from Library of Congress 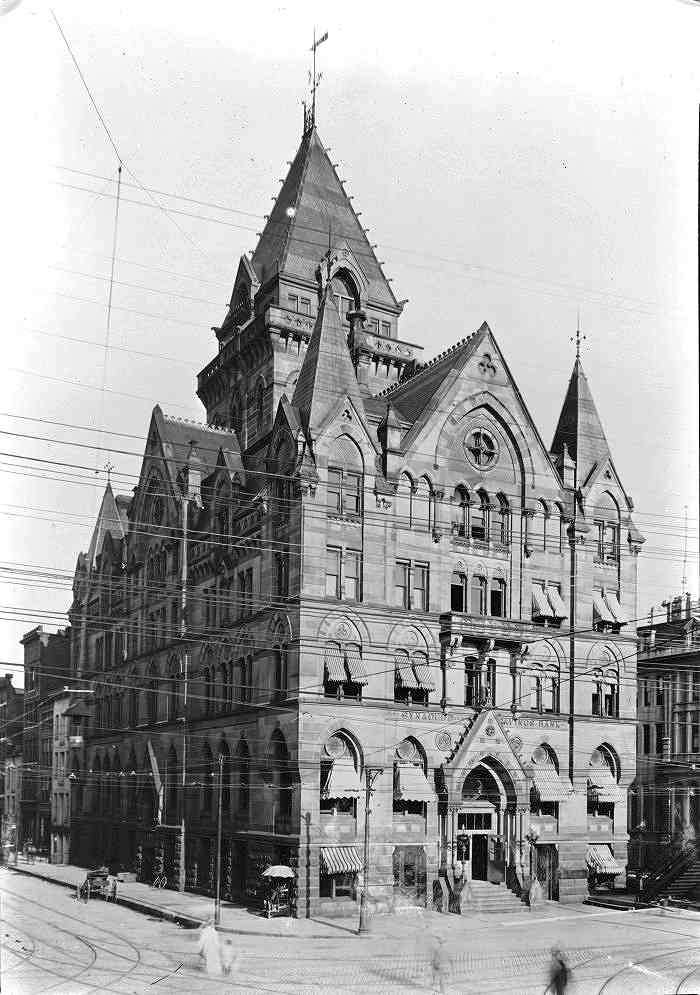 Designed by Syracuse architect Joseph Silsbee, the Syracuse Savings Bank opened in 1876 as the tallest structure Syracuse, rising to 170 feet above the Syracuse landscape, including the Erie Canal that flowed next to the building. And, with its height came the city's first passenger elevator used in an office building. For the cost of one dime, visitors rode to the top of the tower to enjoy a bird's eye view of Syracuse. Additionally, it provides insight into the significance of both the Erie Canal, integral to Syracuse's growth,  and banking power as the United States slowly recovered from The Panic of 1873 and entered the Gilded Age.
Though many architects submitted designs, Silsbee was chosen as the building's architect. He designed the building in Victorian Gothic style with a tan, sandstone exterior, and pointed-arched windows. Upon completion, he established his new offices in the top of the tower where he remained until,  like many architects, moved to his practice to Chicago during the mid-1880s.
In addition to the elevator, a network of electric clocks operated throughout the building, and the bank was as close to fireproof as possible for the era, which proved to become an essential aspect of construction throughout the nation in the wake of the Great Chicago Fire (among other lesser known fires).
The bank symbolizes  Syracuse's growth in the 1870s and 1880s, benefiting from the Erie canal and the many investors and workers who arrived; the population of Syracuse doubled between 1870 and 1890 from 43,051 to 88,143 (and it had only been a little more than 28,000 in 1860).  As well, the bank marks a period of recovery from The Panic of 1873, when financial troubles forced the closure of the The New York Stock Exchange for ten days, dried up credit for many businesses, forced factories to close, and saw many banks and railroads fail.  By 1876, the economy slowly recovered and, by the 1880s was headed to the heart of what is now known as the Gilded Age, which included influential banking power often tied to commercial loans and construction. Indeed, by 1880, New England existed as one of the world's most heavily banked areas. And, a bank's architecture often served to mark its success and viability.
The same banking institution, Syracuse Savings Bank, occupied this building for more than 100 years, before giving way to Fleet Bank and then the Bank of America. As of 2016, plans were made to convert the top floors into an apartment complex.

"The Syracuse Savings Bank Building." Searching for Silsbee. blogspot.com. August 11, 2010. . http://jlsilsbee.blogspot.com/2010/08/syracuse-savings-bank-building.html. Blogger only refers to himself as "Chris," but documentation (research trail) exists throughout his or her blog.

Trachtenberg, Alan. The Incorporation of America: Culture and Society in the Gilded Age. New York: Hill and Wang, 2007, 1982.