Constructed in 1835 to serve the Episcopalian community of Hancock, Maryland, Saint Thomas’ is believed to have been patterned after the original Emmanuel Church of Cumberland, Maryland, which was demolished in 1851. The resemblance of the two buildings is likely due to the leadership of the pastor of the Cumberland church who also served as the interim minister for Hancock in the years prior to Saint Thomas’ construction. During the American Civil War, Federal troops utilized the Church as a hospital for their wounded, and women from the congregation and larger town cared for sick and injured soldiers in the nave and rectory. It was also during that conflict that the church became a target for the ire of Confederate General Stonewall Jackson, who shelled the building and other areas of the town from January 5-6, 1862 in his attempt to cross the nearby Potomac River as part of his Romney Expedition. Visitors are welcome to view the church and learn more about its history when it is open on Sundays for weekly religious services and throughout the week upon request.

View of Saint Thomas' facing south toward the position occupied by Confederate troops under General Stonewall Jackson during the Battle of Hancock, January 5-6, 1862. Courtesy of Saint Thomas' Episcopal Church. 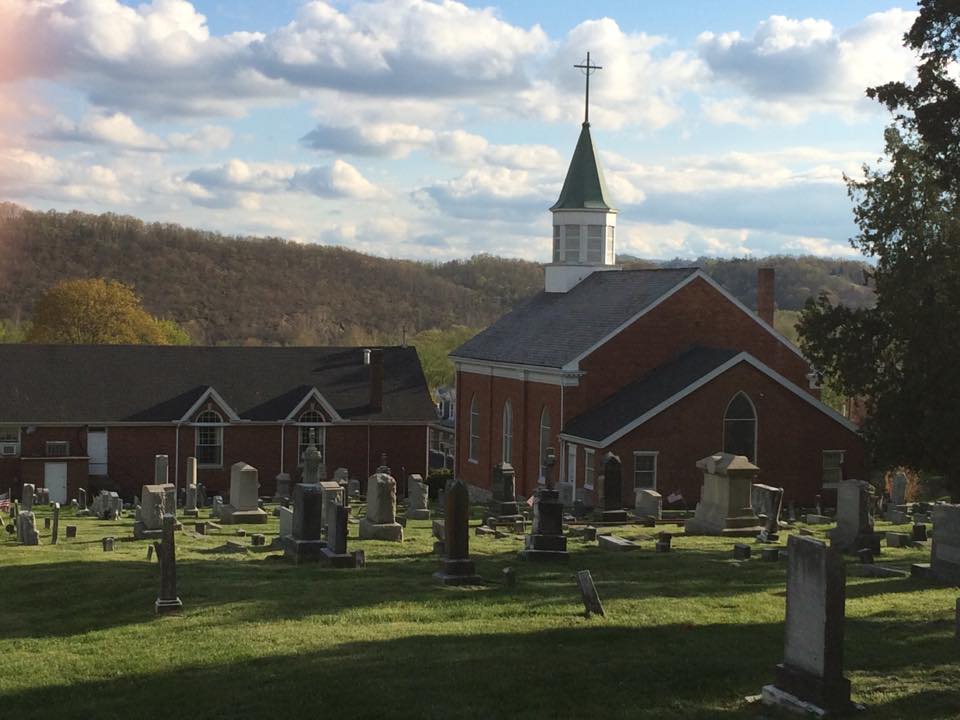 Dr. James Breathed's gravestone in Saint Thomas' cemetery, the epitaph of which has since faded, making the quote attributed to Confederate General Robert E. Lee illegible. Courtesy of Find-A-Grave.com. 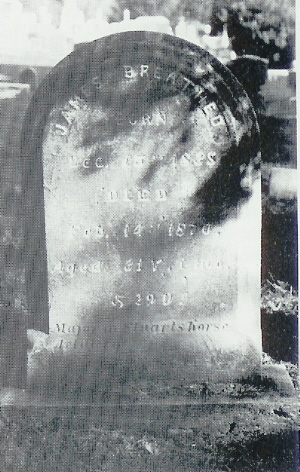 Prior to the church’s construction, members of the Episcopalian community in Hancock were ministered to by Reverend Leonard H. Johns, who traveled to the town from distant Cumberland every other week via the Old National Pike, which ran over portions of what is now US-40, I-68, and I-70. It was not until nearly a century after European settlers first arrived in the area that the parish was officially recognized by the Episcopal Diocese of Maryland, and Revered John Delaplane of Frederick County was hired as its first rector. By the time Delaplane arrived in the town, construction was already underway under the direction of his predecessor Johns, who had arranged for German and Irish immigrant laborers working on the nearby C&O Canal to aid in the building of the church. They completed construction by the winter of 1835, the same year they had begun.

For the first nearly three decades of the church’s existence, life in Hancock was relatively uneventful. With the outbreak of hostilities during the American Civil War, however, the building became a focal point for military activity during the conflict. Occupying the narrowest portion of the state of Maryland, the town of Hancock became a natural thoroughfare for Confederate forces endeavoring to cross the Potomac River in order to threaten Washington, D.C. from the north. Saint Thomas’ location on a hill overlooking the town also made it an ideal position for Federal troops hoping to stymie such efforts, a fact that led to the church’s occupation by Union troops under General Frederick Lander during Confederate General Stonewall Jackson’s two-day bombardment of the town in early January 1862, which came to be known as the Battle of Hancock.

Located on Church Street in Hancock, Maryland on a hill overlooking the nearby C&O Canal and Potomac River, Saint Thomas’ Episcopal Church is one of the oldest parishes within the Episcopal Diocese of Maryland. The church structure is known for its role in Confederate General Stonewall Jackson’s Romney Expedition during the American Civil War and its service as a hospital for Federal troops during that conflict. The church’s cemetery is also home to the burial site of Dr. James Breathed, a well-known Confederate artillery officer who served under General J.E.B. Stuart. Saint Thomas’ history reveals much about the experiences of American citizens living in small towns throughout the United States during the Southern rebellion, as well as about the nature of those citizens’ divided loyalties in the era. After the war, the church became the burial site for Dr. James Breathed, a former major in Confederate General J.E.B. Stuart’s famous Horse Artillery and a prominent member of Saint Thomas’ congregation prior to his death in 1870 due to complications from old war wounds.

Federal troops also utilized the church as a hospital for eighteen months during that period, causing considerable damage to the building’s interior according to a claim filed in federal court by the vestry of Saint Thomas in 1907. “The soldiers slept and cooked in it,” the claim reads, and the “seats were taken out, the windows broken, plastering knocked off, pulpit injured, and brick walls injured.”1

Despite these damages (and the fact that the church did not receive compensation for them until almost fifty years later), the church seems to have had little problem resuming normal operations after the surrender of Confederate forces in 1865. Indeed, shortly after his parole in April of that year in Winchester, Virginia, Major James Breathed of General J.E.B. Stuart’s Horse Artillery settled down with his sister Priscilla Williams Breathed in Hancock. Originally born in what is now Berkeley Springs, West Virginia, Breathed spent the remaining five years of his life practicing medicine in Hancock and attending religious services at Saint Thomas’. He is buried in the church’s cemetery, where his epitaph includes a quote attributed to General Robert E. Lee characterizing him as the “hardest Artillery fighter the war produced.”2

The fact that Breathed’s final resting place resides at a location that played such a prominent role in resisting the rebellion in which he took part is indicative of the complex nature of local loyalties during a conflict that tore families and communities apart in every corner of the United States. Saint Thomas’ is a window not only into the experiences of the American citizens that struggled to negotiate those loyalties but into a theater of the war that is often neglected by historians and popular mythologies that are more concerned with events further to the east. The weight of the war was felt on a daily basis by the residents of towns like Hancock, in real terms during periods of military activity and in more emotional ones while neighbors and family members flocked to serve under the banners of both the Confederate and Union armies.

Saint Thomas’ remains an active congregation today, and its building serving as a reminder of the history of the community during an era that saw a nation divided as well as the resilience of the community it serves.