The Knapp–Wilson House is a site significant for its association with agriculturist and teacher Seaman A. Knapp and with U.S. Secretary of Agriculture James Wilson. 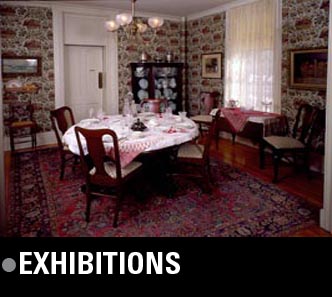 Nestled in the center of Iowa State University, the Farm House Museum sits as a monument to early Iowa State history and culture.  As the first building on campus as well as a National Historic Landmark, the Farm House was built in 1860 before campus was occupied by students or classrooms. The prairie landscape was bleak and desolate at the time, and those first farm tenants primed the land for agricultural experimentation. This early practice led to Iowa State Agricultural College and Model Farm opening its doors to Iowa students for free in 1869 under the provisions of the Morrill Act (or Land-grant Act) of 1862.

Many important Iowa State figures have made the Farm House their home throughout the 150 years of use. The first president of the College, Adonijah Welch, briefly stayed at the Farm House and wrote his inaugural speech in the Northeast bedroom on the second floor.  James “Tama Jim” Wilson resided for much of the 1890s with his family at the Farm House until he was asked to join President McKinley’s cabinet as Secretary of Agriculture. Agriculture Dean Charles Curtiss, and his young family, would replace Wilson and he would become the longest resident the Farm House had and would ever see.  Students also played a prominent role in life at the Farm House – many students were hired to help with daily life or chores of Farm House matrons, assist in early farm work. In the late 1940s the Farm House was used as a practice home for young women in the Home Economics Department.

In 1976, after much time and effort was put into restoring the early beauty of the modest farm home and over 110 years after the initial construction, the Farm House became a public museum.  Now students, faculty and community members can enjoy the museum while remembering the significance that one small farm home had upon shaping a nationally recognized land-grant university.