The Battle of San Jacinto, occurred April 21st, 1836 and was the last battle in the Texas Revolution. The Texan revolutionaries, led by General Sam Houston, caught Mexican General Santa Anna and his troops by surprise, which led to Santa Anna's surrender. While held captive, Sam Houston and Santa Anna agreed on treaty terms which granted Texas its freedom. Due to the victory of the revolutionaries Texas became an independent nation and was later annexed by the United States of America.

"The Battle of San Jacinto" Painted by Henry McArdle (1895) 1 One of the most well known paintings of the Texas Revolutionary War, Henry McArdle painted this painting based off of stories from his grandfather who fought in the battle. 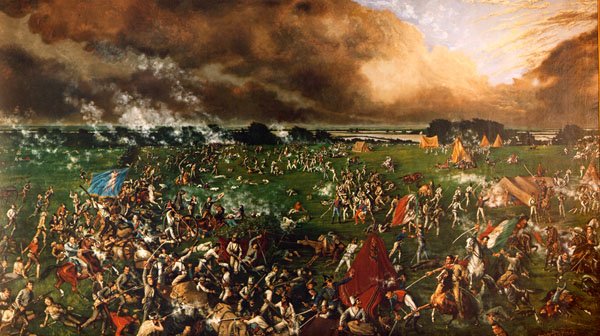 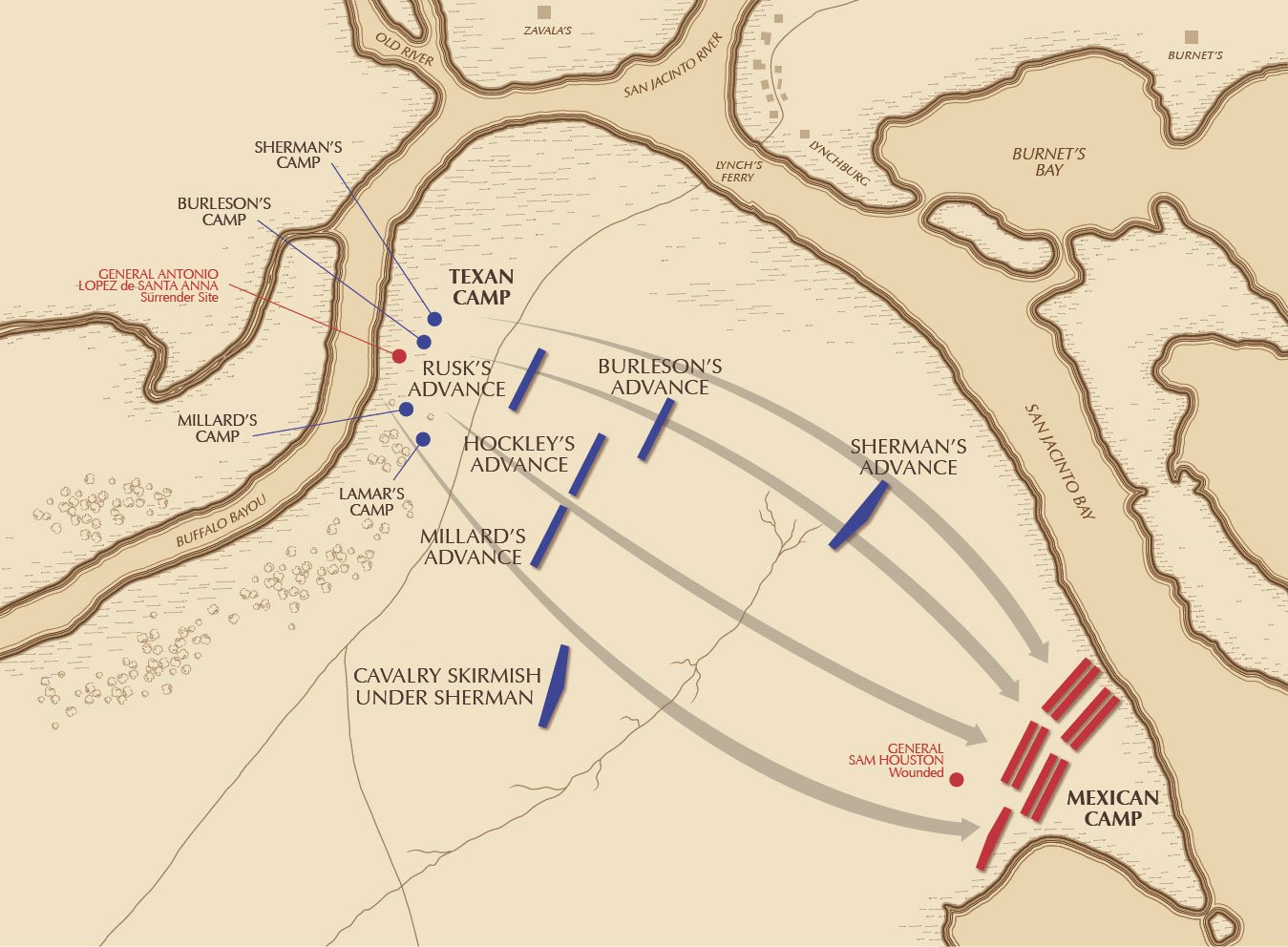 "The Surrender of Santa Anna" painted by William Henry Huddle. 7 This famous painting depicts the events that occurred the day after the battle, when captive Santa Anna met with wounded Sam Houston 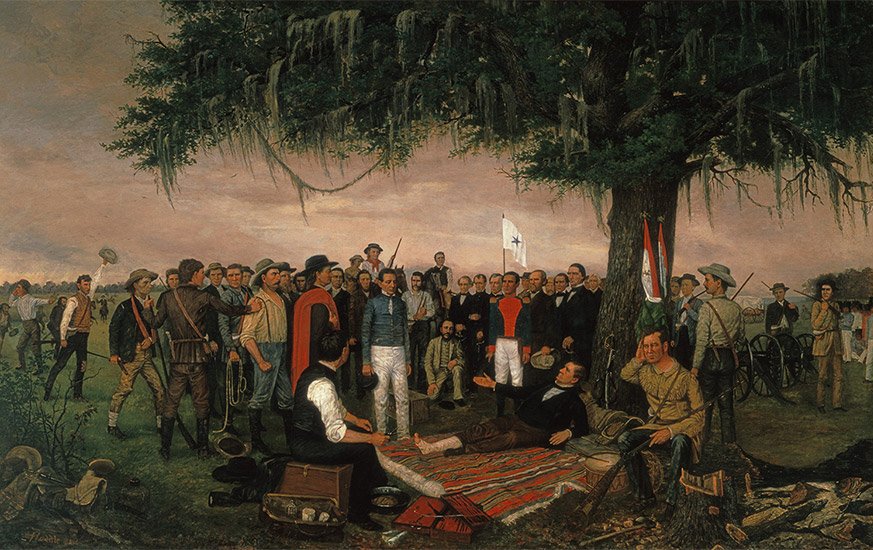 In the events leading up to the Battle of San Jacinto, many Texan revolutionary army had an increase of enlistees. Many Texan settlers and United States citizens volunteered after hearing about the loss the revolutionaries faced at the Alamo and the massacre of the unarmed Texans captured at Goliad. Worried that his men were not prepared or trained enough, Texan General Sam Houston tried to avoid General Santa Anna and the Mexican army. On April 20th, 1836 the two armies met near the San Jacinto river. The two armies exchanged cannon fire for some time. Once the Mexican army received around 500 Mexican reinforcements Santa Anna decided to give his men some rest. Santa Anna made the mistake of not placing sentries to keep watch for any revolutionaries.2

After there was no attack the next morning, General Sam Houston and a war council voted to launch an attack on the resting Mexican army.2 Although this attack was quite risky, many of the Texan revolutionaries were more than willing to run into battle. According to a personal account of the battle, many of the troops were anxious to attack and responded with a yell when asked by General Houston if they were ready to go into battle.3 The Battle of San Jacinto was a short battle as the Mexican had been caught by surprise. Even though the Mexican army was resting in an open prairie, they were not alerted of the Texan army until the Texans were only about 200 yards away. Once the Mexicans had noticed, the Texan artillery began to fire.2 This caused many Mexicans to scramble and some even flee. Unfortunately for those who could did not run away from the battle surrendered and slaughtered. The Texans were still angered by the acts and atrocities the Mexican army had done unto their fellow Texan soldiers.

“the blood of our countrymen was too fresh in the memory of our people to be forgotten or to let one Mexican escape, until worn down with pursuit and slaughter they commenced making prisoners.” 4

The defeat was a massive upset as the Mexican army outnumbered the Texan army by about 2 to 1.5 The battle only lasted about nineteen minutes even though the Mexican army consisted of about 1,600 men and the Texan army having around 900 men in total.2 After the battle was over and Santa Anna had been captured General Houston, who had been injured in the leg, decided to spare Santa Anna's life against the wishes of his troops. Even though most of the Texan army wanted Santa Anna dead, General Houston saw an opportunity to bargain Texas's independence for Santa Anna's life. After a month of being prisoner Santa Anna agreed to the terms and signed the treaty that granted and recognized Texas's Independence.5

Texas became an independent Nation in 1836 and transformed into The Republic of Texas. Texas had wanted to join the United States of America but due to not wanting to increase tensions with Mexico and the anti-slavery movement not wanting to admit another slave state, the US declined. The Republic of Texas lasted nine years as an independent nation until being annexed by the United States of America in December of 1845.2 Mexico and Texas continued to struggle with land disputes in south Texas leading to United States going to war with Mexico. After Mexico's defeat, the United States gained new territories leading to the expansion of the west.