The Yukon Flour Mills, founded in 1893 began as a small grain silo operation, which soon began to blossom as the main industry in Canadian County. Yukon and surrounding areas had some of the most fertile farmland in Oklahoma. The simple grain silo soon grew into multiple flour mills that allowed Yukon to be a location for all major exports of flour. The flour mills, run by the Yukon Mill and Grain Company, quickly became the largest flour plant in the Southwest. 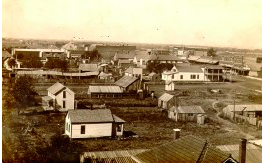 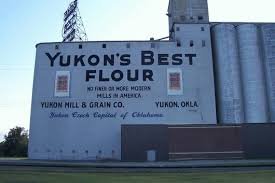 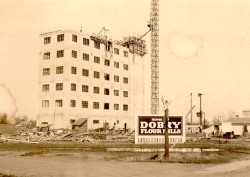 Yukon was founded in 1891 by A.N. Spencer.  Yukon began as a small settlement when the railroad companies decided to build train tracks through Frisco, a town that has been deserted since 1891.  Yukon was a do-nothing town for the first few years of its existence, but the Yukon Mill and Grain Company quickly changed that notion.  Flour was and still is a major export for thousands of farmers in the South.  The business continued to grow during the early 1900s, and their company began to ship flour overseas by 1915.

The original grain silo run by A.N. Spencer was built in 1893, but the real success of the flour mills began when the Yukon Mill and Grain Company was purchased by John F. Kroutil, Frank L. Kroutil, and A F Dobry.  The Kroutils played a massive role in the early success of the town, especially John F. Kroutil.  John and his family emigrated from Czechoslovakia in 1881.  Their early years in the United States were spent in Nebraska, but after a decade in Nebraska, they moved to Oklahoma.  John saw great success when John and his brother Frank purchased the Yukon Mil and Grain Company in 1902.[1]  According to Miloslav Rechcigl, this business produced only 50 bushels per day while in the later years, they were producing upwards of 2,000 bushels.  John and Frank both thrived in the flour business, but they also opened a successful bank, the Yukon National Bank where they served as the President and Vice President. John also worked as the President of the Yukon Electric Company.  As he began to age, he started the Progress Brewing Company in Oklahoma, which was one of three brewing companies post-prohibition that was given a brewing license in Oklahoma.[1]

The Kroutils continued to run the Yukon Mill and Grain Company for decades until they were bought out by Shawnee Mills in the 1970s.  The Dobry Mill was sold to Mid-Continent in 1972.  Mid-Continent still uses the mill as a Co-Op for many different goods.  Both mills contributed greatly to the economy in Canadian County during the early 1900s well into the 1960s and 1970s. This allowed other businesses, to thrive because of the “railroad, flour mill, grain elevators, stores, churches, rich farm land, and its close proximity to Oklahoma City.” [3]  This thriving town has continued to grow because of the flour mill and grain elevators.

John F. Kroutil, Frank L. Kroutil, A. F. Dobry, and all of their employees that worked in the mills were called millers or millermen.  The impact that these people had on the community led to the nickname Millers for the school district.  The nickname given in the 1930s has stood for nearly a century, and there are no signs of a nickname change anytime soon.

[2] Rechcigl, Miroslav Jr. Beyond the Sea of Beer: History of Immigration of Bohemians and Czechs to the New World and Their Contributions. Bloomington, IN: AuthorHouse, 2017.

[2] Rechcigl, Miroslav Jr. Beyond the Sea of Beer: History of Immigration of Bohemians and Czechs to the New World and Their Contributions. Bloomington, IN: AuthorHouse, 2017.