The Glenn Pool Oil Field just outside of what is now Tulsa, Oklahoma was discovered in 1901 by the oil workers Robert Galbreath and Frank Chesley. During the following years, they signed a formal lease agreement, thus marking the beginning of a massive oil boom. Officially named GlennPool Field after a meeting in Sapulpa in 1906, the site entered its glory years to the point that Oklahoma was considered the nation's leading oil producer from 1907 to 1928.

The GlennPool Field with all its drilling wells. This picture is undated but it was probably taken during the site's rapid expansion between 1907 and 1928. 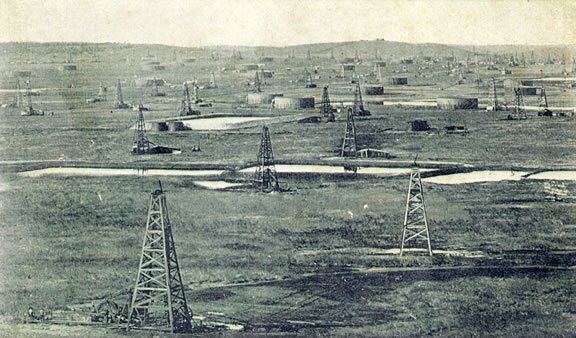 A postcard of the GlennPool Oil Field released in 1908, that shows its hugeness. 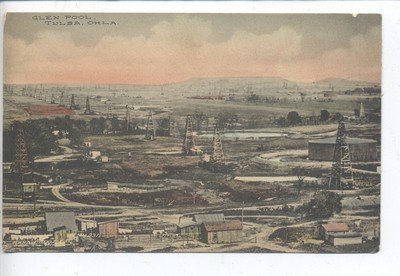 Another picture of the GlennPool Oil Field. It seems that the field stretches as far as the eye can see. 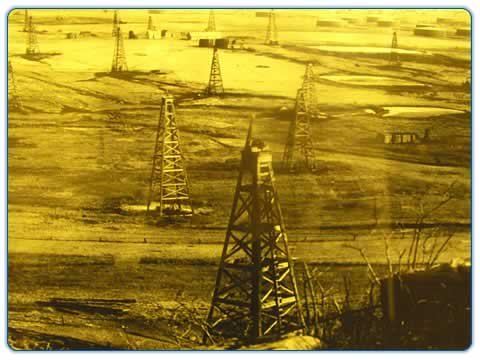 This map actually shows the county of Tulsa. As you can see on the zoomed part, the Glenn Pool Oil Field was located in the south west of Tulsa (red zone on picture). 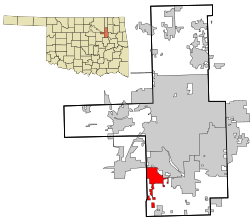 The discovery of oil in the Glenn Pool Field belongs to the famous episode of the Boom Towns in Oklahoma: after statehood, the Oklahoma economy boomed onto the scene by locals capitalizing on natural resources like oil. This entry provides insights about what allowed Oklahoma to develop its economy during the 20th century.

The interest in oil takes us back to the time of the colonies. During the sixteenth century, a few explorers encountered petroleum deposits on the Californian coast. Oil was first useful as a grease for tools and wagons. Then, as the industrial revolution expanded all over the country, several oil corporations were created to make a more efficient use of this natural resource: the first one was the Pennsylvania Rock Oil Company of Connecticut. Seeing the tremendous results of such exploitations, companies, but also independant workers began to look for other sources of oil.
Oil was first discovered in what was then Indian Territory around 1897: early records tell us about small oil discoveries in the Tulsa area that raised some excitement, but nothing very large. However, History considers July 3, 1901, as the moment that forever changed Oklahoma and the American oil industry.
Robert Galbreath and Franck Chesley, two oil drillers, located an oil prospect on the Ida Glenn farm, in the very south of Tulsa and four miles south of Sapulpa, on Indian Territory. After finding a thick green liquid, they both agreed to ask for a lease to legally drill the new test well. Therefore, they signed a formal lease agreement on April 22, 1905, and started collecting the natural resource. On November 22, the well was completed a depth of 1.481 feet and allowed a production of an average 80 barrels per day. The news became widely spread and soon occurred what is know as the Oil Boom in Oklahoma.

The Town of Glenpool did not really exist yet. What did exist was a group of 12 families in a settlement called Glenn. The towns of Keifer, Sapulpa, Mounds and Tulsa were all feuding over who owned the field. Finally, in May 1906, the coveted field got its name after an official meeting in Sapulpa: it became known as GlennPool, taking its name from Ida E. Glenn, the Creek Indian woman upon whose allotment Galbreath first struck oil.

Soon the site went from one well to almost one hundred, and from 80 acres to 80.000, thus creating an overproduction of oil. Counting a total of 43.520.000 barrels in 1907, this event established Tulsa as the foremost oil city in Oklahoma. Of course, it led to a bunch of regulations for the purpose of managing the economy of the nation.

The first major pipelines were built by the Texas Company, the Gulf Oil Company and the Prairie Oil and Gas Company, to ship the production to the market. It generated considerable investments benefiting the state of Oklahoma. At the local scale, the Oklahoma Natural Gas Company emerged in 1907 so as to provide gas service to Oklahoma City.

To put it in a nutshell, the Glenn Pool Field completely changed the economy of Oklahoma. It created jobs, supplies, international relations all benefitting the state and its inhabitants. Oklahoma was the nation’s leading oil producer until 1928, and the city of GlennPool remained active until the end of the century.

- A sepia picture of the Glenn Pool site, Sapulpa Oklahoma, from the Western History Collections