The Norman Asylum was built in the year of 1895 and it was located near what is now known as the modern day Griffin Memorial hospital. The Norman Asylum housed the mentally insane and it was the first mental asylum in Norman, OK. There was a fire that took place at the asylum in 1918 and there were 38 patients who were lost within that fire. Women and children were also apart of this establishment in Norman and the asylum was always understaffed and there were never enough doctors or nurses to care, for the patients within the asylum. 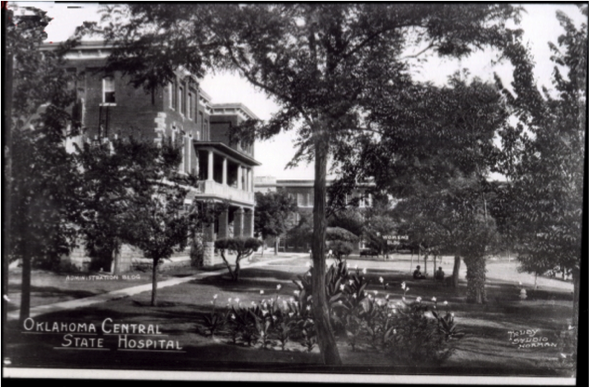 The Norman Asylum housed the mentally insane and was located close to where Griffin Memorial Hospital is at today. What are interesting behind the history of this asylum were how the patients were treated and the treatments that they were given. A treatment that was used to help the patients within the asylum, back in the 1900’s there was a part of Norman where there was a lot of unused farmland. The patients of the mental asylum would go and work on this farmland as apart of their treatment to help them. With this in mind it showed that how farmland could be used for various things and how it would help the mentally insane.

In the year of 1918 there was a fire that took place in the Norman Asylum and patients were lost in that fire. The fire of 1918 took the lives of 38 patients who were being housed in the asylum. The bodies of the victims the location of the burial sight was never known. Recently it was discovered that the bodies of the victims from the fire of 1918 were buried in a mass grave. The mass grave is now located at what is now known as Odd Day’s cemetery.

The Asylum that was located in Norman, OK opened in the year of 1895 this was the beginning of time for the asylum. This asylum was open for many years and in the year of 1918 on April 13th a fire occurred that killed 38 patients. This is an extremely interesting piece of history that occurred in Norman, OK considering that we still have a form of a mental asylum in Norman, OK today. This information shows what took place in the past and the history behind the Norman Asylum before Griffin Memorial became the replacement.

Another aspect to think about asylums is the treatment that the patients had to endure. In the Oklahoma State Asylum this asylum mainly focused on women and children and the treatment that they received. Women and children were given electroshock therapy if you had bipolar disorder, and mania. If you were a patient within this asylum who caused trouble and disturbances on a regular basis electroshock therapy could be your fate as well. The asylum was severally understaffed causing and even worse environment for the patients. There were never enough doctors or nurses to take care of the patients. With this in mind this showed how the asylum was managed and run in the past and gives an insight on what the patients went through.

In conclusion The Norman Asylum had many events that occurred within the walls of the asylum. The fires that happened in 1918 and took the lives of 38 patients that were later discovered to be buried in a mass grave. The location of these patients’ bodies was unknown until a mass grave was discovered containing the bodies from the fire. The treatment of the patients was not a large concern to the employees who ran the asylum, this is why it was always understaffed and there were never enough doctors or nurses. Lastly this history of the Norman Asylum gives us an inside on the history behind Norman, OK and the first initial asylum that was located here.