Named after the shock absorbing part on a helicopter, the Oleo Strut was a GI Coffeehouse that operated during 1968-1972. In the beginning, it was a place for GI's to spend their free time leisurely but later developed into protests and other methods to further the anti-war movement. It was one of several GI coffeehouses that contributed to the soldier anti-war effort during the Vietnam War. It was a center where GI's who disagreed with the war could openly voice their opinions. A number of GI newspapers also debuted through these coffeehouses. Popular anti-war advocates also were able to visit these establishments and speak freely. Jane Fonda was one of the anti-war advocates to visit the Oleo Strut.

Newspaper clipping when Oleo Strut was shut down. 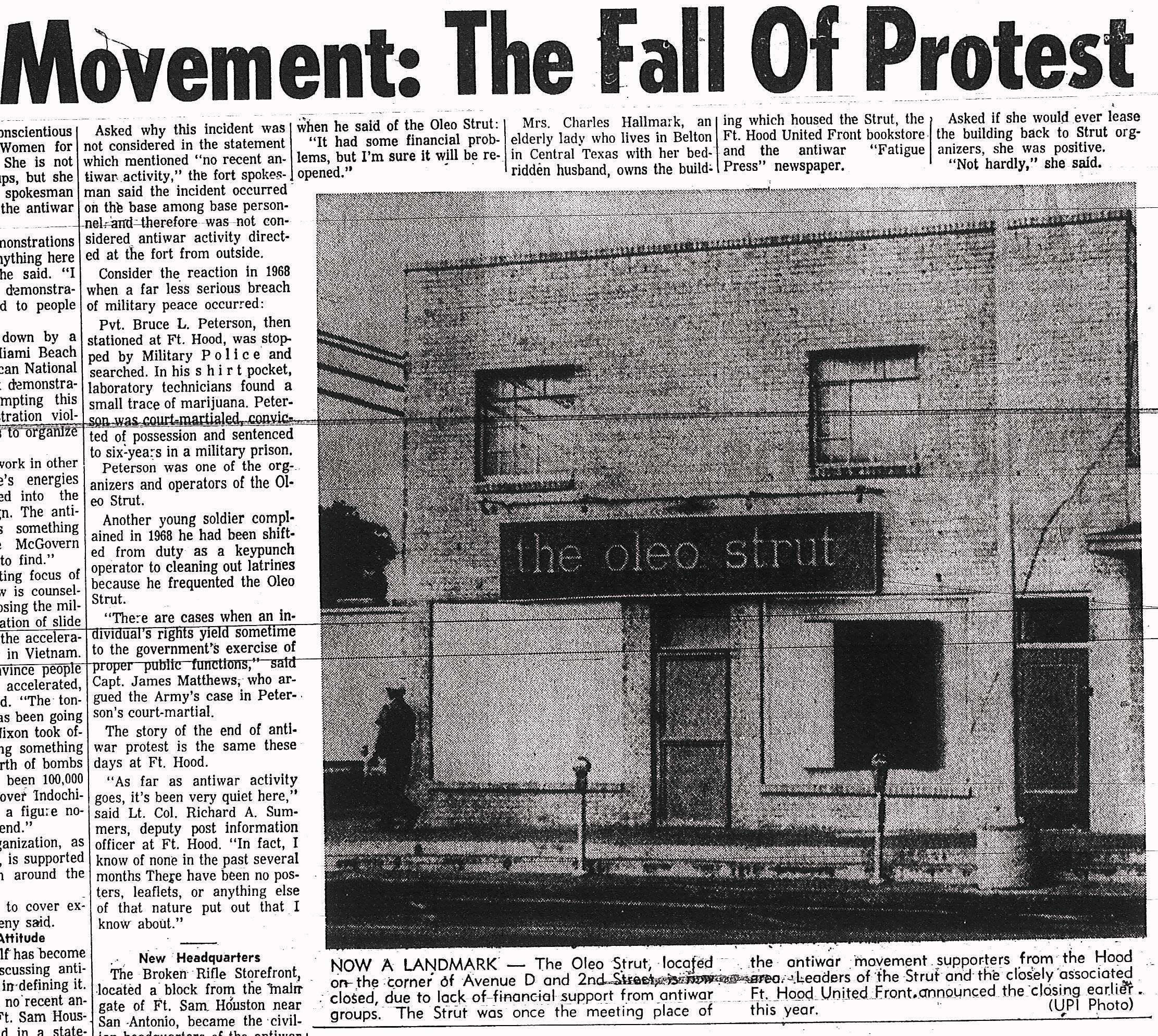 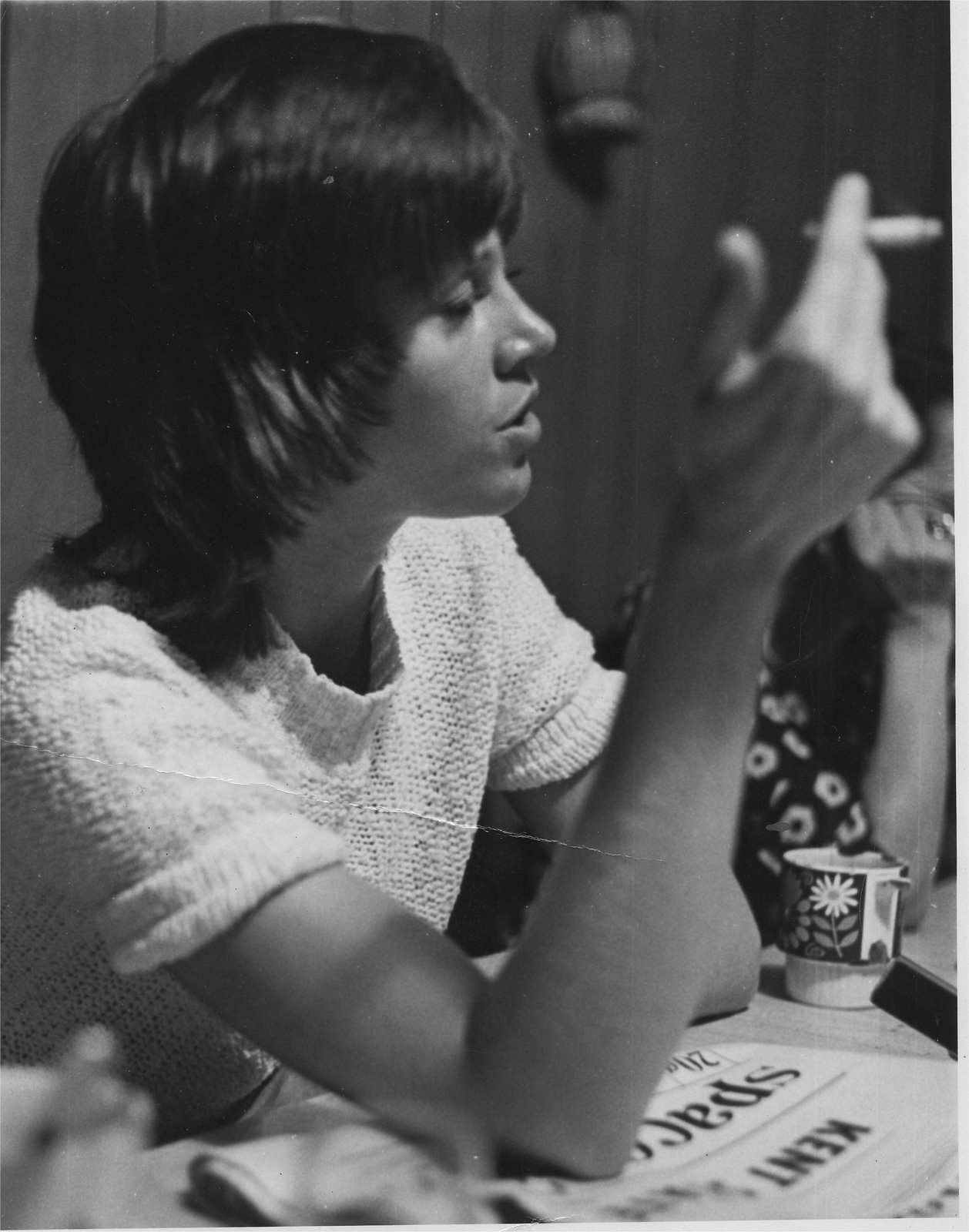 The counter-culture movement during the Vietnam War was a time of social revolution. Although it is generalized that everyone protesting the war were together in their voice against it, in actuality this movement was comprised of many different groups fighting for their own reasons and causes. One group of the many, was a number of soldiers who did not agree with the Vietnam war.

In the late 1960s/early 1970s, a chain of GI coffeehouses were opened up near various military bases. The first of these GI coffeehouses began in Columbia, SC and branched out to other locations later that year. The coffeehouses were places where GI's were able to enjoy themselves by drinking coffee, conversing with others, and were offered the opportunity to read anti-war newspapers if they chose to. Many of the GI coffeehouses were met by hostility from the pro-war community. Despite these occurrences however, they were still able to protest and express their opinions on the Vietnam War. By having these areas where they could meet and discuss issues together the soldiers were able to band together and orchestrate ideas to aid their goal to end the war.

In 1968, the Oleo Strut was founded by Fred Gardener in Killeen, Texas outside of Fort Hood. Gardener created the Oleo Strut after his prior GI coffeehouse he created in Columbia, SC known as the "UFO" was shut down. The Oleo Strut became the third of a long list of GI coffeehouses that would be developed during this time.
The main objective within Oleo Strut's walls became to being Texas's anti-war headquarters. They were able to organize boycotts, lead peace marches, set up legal office, and even printed their own underground anti-war newspaper. Oleo Strut became the birthplace of the anti-war newspaper, The Fatigue Press. This paper would later aid some of their members in creating a defense campaign by publicizing their cases of the Fort Hood 43.

One of the boycotts held by Oleo Strut was the conducted by the Fort Hood 43. The Fort Hood 43 was a group of African-American soldiers who refused to be sent to Chicago to aid in putting down the resistance at the Democratic National Convention. They were of course met with resistance from Fort Hood command. The Fort Hood command began by trying to reason and persuade with the 43 soldiers. When that method did not work the soldiers were then beaten by military police. Finally when nothing else worked charges were brought against all 43 soldiers. The Fatigue Press however, streamed the information and news updates on the trials and as a result the men received lighter sentences.