Briggs Hardware Store is one of the longest-operating family businesses in Raleigh. Established by Thomas H. Briggs and James Dodd in 1865, Dodd left the company three years later. Briggs then brought in his two sons, James and Thomas H. Jr. The original hardware building was replaced by Raleigh’s first skyscraper in 1874. After residing in the building for over one-hundred years, the Briggs family sold it in 1995 and moved to a new location on Atlantic Avenue. Twenty years later, hard times forced Briggs Hardware to close. However, the store reopened at this location in August 2015. 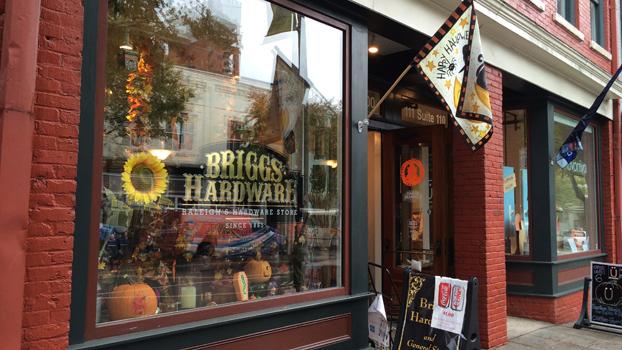 Briggs family tradition claims that Thomas H. Briggs traded his Confederate money for gold in the 1860s and kept it buried for most of the Civil War. In 1864, he unearthed it to invest in a new hardware store. The store opened in 1865, with Thomas H. Briggs and James Dodd as partners. Dodd left the business in 1868, and it became known as Thomas H. Briggs & Sons. In 1872, construction of a new Briggs Hardware building began. When work was completed two years later, the four-story “skyscraper” became the tallest building in Raleigh, a title it would hold for another thirty-three years.

Since its construction, the upper story of the building, with its cornices and parapet, have remained unchanged, though the first floor has been renovated many times over the years. Inside, however, the upper levels housed a variety of businesses and organizations. The floors were used by the Oak City Guard in the 1890s for drill practice. The city’s first YMCA later moved in. After that, the space was used by a Catholic congregation, the Raleigh Little Theater, and a number of insurance and law offices.

In 1995, the Briggs family, who was still operating the hardware store, decided to move the business. The Briggs Hardware building then passed into the hands of a non-profit coalition. After extensive renovations, the upper floors now serve as offices, and the downstairs is home to the City of Raleigh Museum. Meanwhile, Briggs Hardware was forced to close in July 2015. However, the following month, Briggs family member Evelyn Murray reopened the store at its present location.

Markovich, Jeremy. Briggs Hardware is the Store that Built Raleigh. Our State. May 08, 2017. Accessed March 01, 2019. https://www.ourstate.com/briggs-hardware-is-the-store-that-built-raleigh/.