Assateague Island Lighthouse is the result of Congressional action to fund lighthouses throughout the Chesapeake. In 1832, the Customs Collector in Norfolk purchased fifty acres here and construction of the 140-foot tall lighthouse commenced. The light remains an active aid to navigation this day. The tower is open for visitors who can walk up the Assateague Lighthouse to see the view for a slight charge. The structure is listed on the National Register of Historic Places. 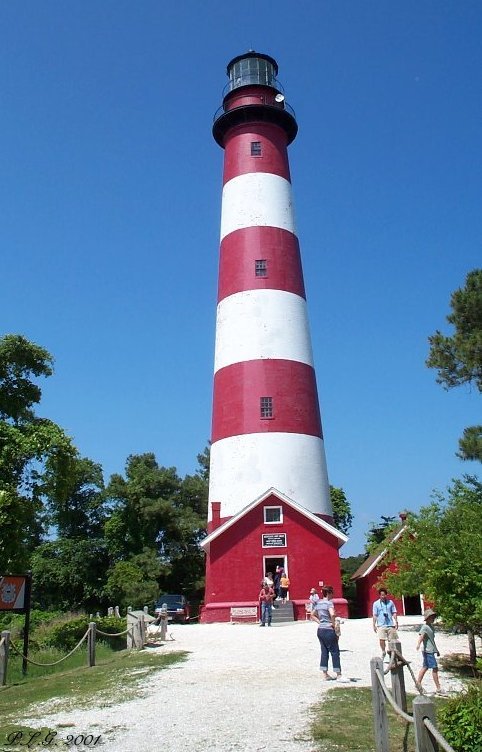 Lighthouse from the Chincoteague Bay 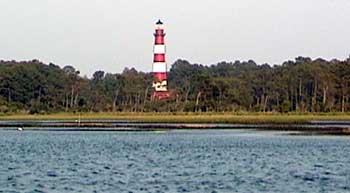 The original Assateague Island Lighthouse was built in 1833 to warn ships of the shallow waters off of the island. This lighthouse replaced the original in 1867. Construction began in 1860 but was delayed by the Civil War.

Assateague Lighthouse is 22 feet above sea level. When the lighthouse was first built, it was at the most southern end of Assateague Island.  However, due to the movement of the sea, and new sand being deposited, the lighthouse is now five miles from Chincoteague Inlet.

The Assateague Lighthouse remains an active lighthouse and is maintained by the Fish and Wildlife Service. The light inside the tower has twin rotating lights that flash one after the other and can be seen 19 miles out to sea.

The Lighthouse is approximately 1/4 mile from Chincoteague Island.  The area includes bicycle and walking trails. The nearby National Wildlife Refuge is an excellent place for birdwatching and other outdoor activies. If taking a beach day on Chincoteague Island it would never hurt to pull off on the side road and explore the lighthouse.