Although his farm is long gone, East of the Hazel Green Cemetery was John Laurie's farm that was a well-known stop to hide runaways. He came to America sometime around 1830. Before he came to America from Scotland, he worked as a clerk at a stone quarry for 20 years. John, his wife, and three children sailed to New York where he left them behind for Illinois. He arrived in Jacksonville in 1839 via Mississippi River. Once established, his wife Jemima Kirk, and children arrived from the east. 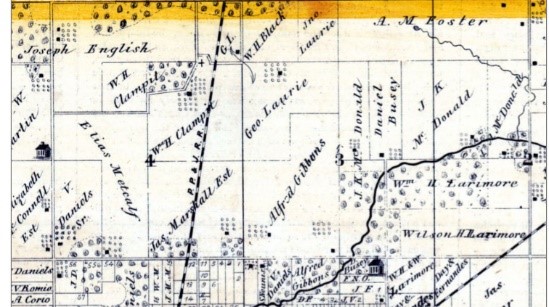 He purchased his farm north of Jacksonville in 1839, owning from 188 to 285 acres. His sons George and John owned the farm in 1872. Laurie once helped a fugitive slave with a $1,500.00 bounty on him who came to Jacksonville. This fugitive was hiding out in the “Little Africa” section of Jacksonville. A neighbor came to visit the home were the runaway was hiding out and having breakfast at the time. The neighbor left the home to tell he slave hunters that he was not at the home of Mr. Bailey. Afterwards the fugitive was then taken from station to station until Barbour Lewis and Samuel Willard took him to the home of John Laurie, north of Jacksonville.