The grave of Geronimo is located in Fort Sill, in Lawton, Oklahoma. Geronimo had lived at this fort on a reservation until his death, after being transferred from Arizona (his home and birthplace) to Florida, and from there to Alabama, and finally to Oklahoma. Although he wished to go back to his home, he died before he got the chance and was buried in Fort Sill. His grave still stands there today, and is well-known, especially among the Apache Indians. Geronimo died in February of 1909, at 80 years old. This site is important not only because it showcases a brilliant culture, but the story of an infamous man with a tragic story. 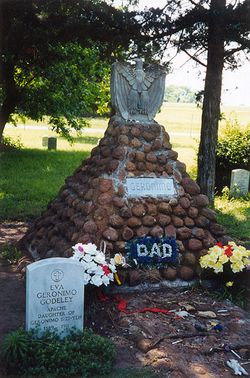 This story is set into motion when Americans start investing in their dream of Manifest Destiny, and traveling west to take advantage of the new territory. By pushing themselves into the fray and claiming this land for themselves, the Americans increase tension dramatically between themselves and the Indians. The perceived solution for this was to separate the nomadic tribes into sedentary reservations, in a way to control and indoctrinate them into the American society, teaching the Indians to farm and “separating the man from the savage”, as many would have said in that time. However, this only created more tensions between Indians and Americans, as most of the tribes were accustomed to hunting bison, and tradition was to migrate with the herd for easier hunting. The stationary reservations were like prisons, and the Indians hated them, feeling insulted by the notion of staying in these reservations. One particular chief who was extremely mad about the situation was Geronimo. Geronimo had lived his whole life in revenge and anger against Mexicans- because a group of Mexicans had killed his family when he was only 11 years old- and now, the Americans were taking away his land and culture.

Therefore, Geronimo starts standing up to the Americans and rallying people behind him to do the same. They will go on raids, and escape the reservation just because they want to go back to the way they were, with the buffalo roaming and themselves following instead of being trapped in a cage like they feel they are in the reservations. The government sends Generals Crook and Miles, separately and respectively, to catch Geronimo and bring him in for apprehension. Crook cannot catch him for good, and eventually resigns peacefully in response to the government’s orders to kill Geronimo, respecting Geronimo enough so that he will not agree to such a thing. Miles eventually catches Geronimo, and sends him to a prisoner-of-war camp in Florida, still believing wholeheartedly that Geronimo “was one of the brightest, most resolute, determined-looking men that I have ever encountered [with] the clearest, sharpest, dark eye I think I have ever seen”.[1]

After his sentence in Florida, Geronimo briefly goes to Alabama before being sent to Fort Sill where he spends the rest of his life. Having learned at this point what the Americans are fascinated by about him, Geronimo knew that he was a tourist attraction, and that he could get some easy money like that. By selling autographed buttons, or even just writing his own name on a slip of paper, Geronimo could get a good amount of money per person. Eventually, Geronimo steadily worked in this manner, collecting money and growing old, until he eventually caught pneumonia at around 79 years old and passed away. Geronimo was buried in Fort Sill where he remains to this day.

While Geronimo’s death may seem a bit anticlimactic, his life was far from it. Some popular photos of Geronimo include guns, and it is arguable that Geronimo could rival any number of gun slinging outlaws, the only difference being his horned cap.[2] People feared Geronimo, both from bias and from experience, as he was an Apache Indian, and he had the brutal skill to prove that he was indeed true to his reputation. Being an outlaw, Geronimo was threatened with a noose multiple times, and truly it was only luck that kept it at bay at some points. It was well-known that the “hanging of Geronimo…. Is favored by the army” for the crimes he has committed, but also “for the influence it would have upon those Indians who are disposed to take the warpath every year.”[3] The government wished more than anything to make an example of Geronimo to express the consequences of rebellious Indians, but Geronimo was never charged with execution.

Once Geronimo settled down in Fort Sill for a long while, he was desperate to go home. He wanted to see his old reservation again, with old traditions and family, so he went to Teddy Roosevelt’s inauguration parade (being invited to do so) and begged at the White House for Roosevelt to let him go back to Arizona, saying “’my heart is no longer bad… Let me die in my own country, an old man who has been punished enough and is free”.[4] Roosevelt replied grimly, trying to explain that because of the white people living there now, Geronimo and his family would not be received kindly, and that it was safer to stay.[5] Ever since that meeting, Geronimo focused all his attention on getting back home, wanting to be allowed to go home, by any means possible. He even adopted Christianity, and many people suspect that he simply claims to have converted to Christianity to win Roosevelt over. This is supported by the message Geronimo asks a reporter to send to the president, stating quite literally: “’Geronimo got religion now. Geronimo fight no more. The old times, he forget.” However, Roosevelt stays firm in his answer, and does not allow Geronimo to go home.

From that point forward, a decline can be seen in Geronimo’s mental and physical health, correlated with each other as he is drinking and gambling more often. These activities are what eventually get him suspended from his church, and even reflect on him after he dies, when his best friend admits that he was “being an utter failure in the chief thing in life”.[6] Geronimo’s burial in Fort Sill seems to recognize his failures, and memorialize them, shining a spotlight on the things he could never reach. Even in death, Geronimo could never get back to his old reservation or his old traditions. In this range of time, the Indians seem to be a significant amount less culturally powerful, and General Miles even refers to them, saying “they can be casually disposed of” “by intermarriage with the whites”; “Many are dying off” and “they are becoming a race of half-breeds.”[7]

There is a direct relationship between a tribe’s culture and their power. As one becomes more powerful, the other is drained of its power. That is why the burial of Geronimo in a place so far from his home is relevant to history, and why it is a memorial to be remembered, for what it represents.