The Dorsey-Jones House was home to escaped slaves Thomas Jones and Basil Dorsey in a small community in Massachusettes. Many slaves came this route on the Underground Railroad. The house was built by Basil Dorsey around 1850, and he bought his freedom while he lived there. Thomas Jones bought the freedom of his wife but could not afford his own or that of her children. The house was located on the National Register of Historic Places on August 25, 2005. 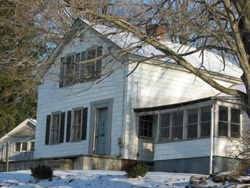 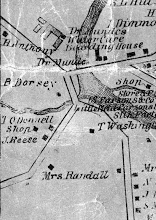 Basil Dorsey escaped slavery in Frederick County, Maryland and relied on stops of the Underground Railroad to aid in his escape. He fled with three of his brothers around 1836. The brothers took on Christian names including Basil, while in Philadelphia, and was aided by one of the most prominent Black abolitionists in the country, Robert Purvis. Since Louisa, Dorsey's wife, was free, she joined him in Pennsylvania, while he was working for Purvis on his farm. He was found out by the betrayal of his brother-in-law and jailed. His brothers fled but were later captured. The case was dismissed and afterward Dorsey moved to Massachusettes, where he was receiving help from Joshua Leavitt, editor of the Emancipator.

Mary Jones, wife of Thomas Jones, purchased the house in 1858. Thomas Jones, born a slave on a North Carolina plantation was sold to a storekeeper at the age of nine. He lost his first wife and three kids to her mistress when she moved to Alabama with him. He remarried Mary Moore, who had three children of her own. He purchased her freedom along with all but one of her children after he learned they were going to be sold. He later became known as a Reverend and earned money by preaching. It is believed that he fled to Canada because of the Fugitive Slave Act.

Selah Trask purchased the Dorsey-Jones house and lived there in 1852. Dorsey moved to the William Warner house at this time. In 1854, Mary Jones purchased the house again. Basil refused to purchase his freedom until friends convinced him to let them raise money for him to be free and finally he agreed. He also said during his trial that he would cut his throat in the court house before he returned to slavery. He made this statement before his case was dismissed in Maryland.