Ethan Allen fought in the American Revolution and is best known for leading a militia known as the Green Mountain Boys who menaced British soldiers throughout the area culminating in the capture of Fort Ticonderoga. Allen later led the effort to secure signatures for a petition that led to Vermont statehood. This monument reflects the centrality of Ethan Allen's memory to the identity of many Vermont residents in the century that followed and was dedicated in 1873. The 35-foot tall monument was created using granite salvaged from the remains of the original Vermont State Capitol in Montpelier which was destroyed by fire in 1857. An eight-foot-tall section of granite serves as the base for the monument which includes an inscription on all four sides. The statue was designed by Peter Stephenson, a Boston sculptor, and the stone was cut based on his design by artisans in Carrara, Italy. 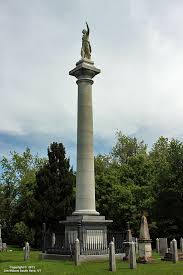