Dedicated in 1929, this stone monument commemorates the Battle of Brandy Station which saw Union and Confederate cavalry clash on June 9, 1863. The monument was dedicated by the United Daughters of the Confederacy (UDC), an organization dedicated to vindicating the antebellum South and the Confederacy several decades after South surrendered. The monument is unique for its location in a remote location at a time when members of the UDC sought to create monuments that celebrated Confederate leaders in public squares. The monument asserts that this battle was "the greatest cavalry battle of the Civil War" which is subject to debate, but few would disagree that this engagement was the largest involving opposing cavalry and quite significant even if it is not well-known outside of a small circle who study the military history of the war as one of several campaigns leading up to the decisive battle at Gettysburg. In this battle, Union cavalry under General Alfred Pleasonton surprised Confederate cavalry that Lee had ordered into the Shenandoah Valley ahead of his offensive into Pennsylvania that culminated in the Battle of Gettysburg. Pleasonton's cavalry caught J.E.B. Stuart and his five cavalry brigades off guard, but they were not able to push Stuart from obtaining high ground or force them to retreat, an action that might have led to Lee’s army and his intentions being detected.

This map overlay details the Battle of Brandy Station. Note where the two Union forces chose to cross the river. This mass separation on the battlefield led to confusion on the south end and ultimately cost the battle. (Google Images) 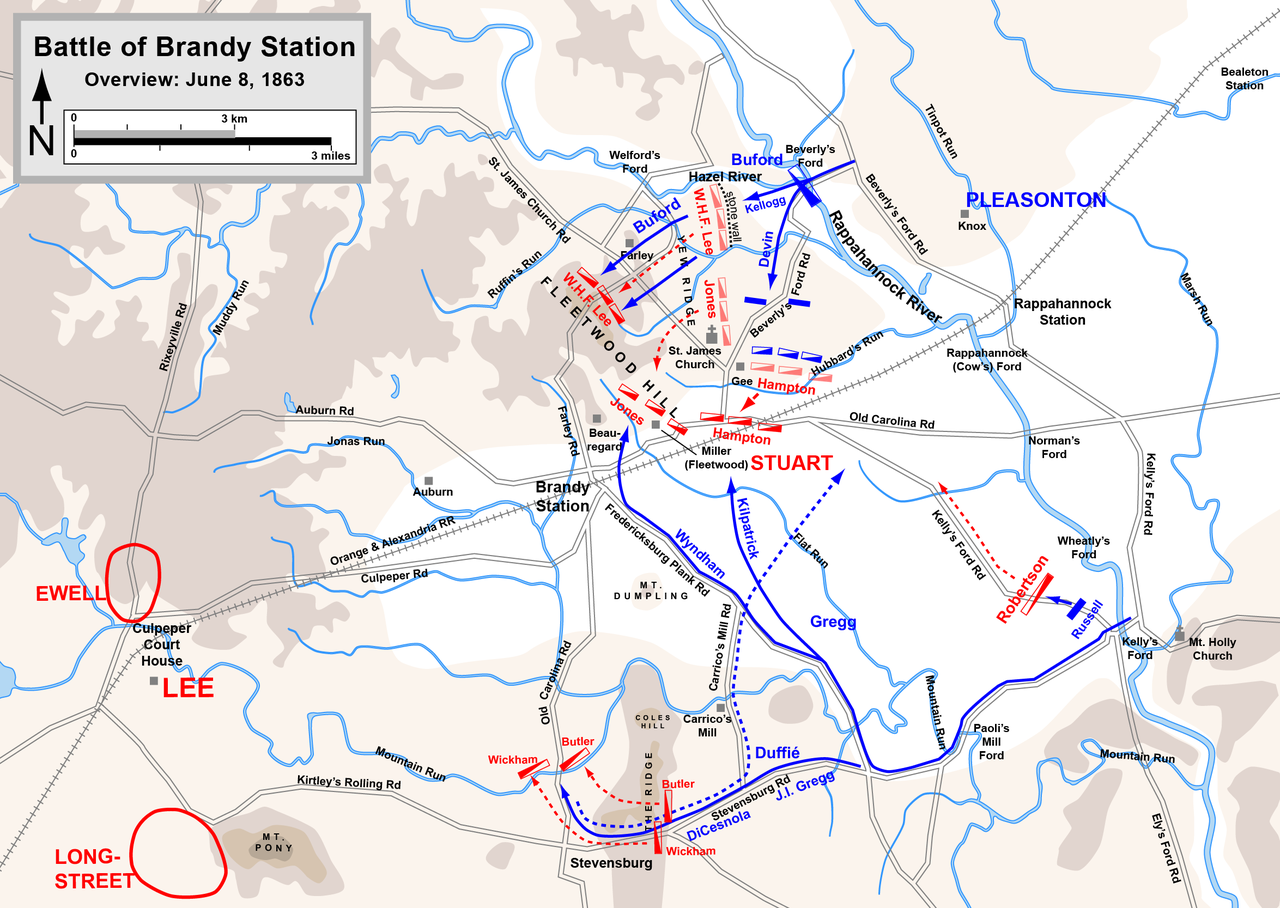 Soldiers from the 6th Pennsylvania Cavalry are seen here recouperating after the day-long battle. Men from this unit would see most of the battle at St. James Church and would also suffer more casualties than any of the other regiments that day.

This monument was erected in 1929 by the United Daughters of the Confederacy. 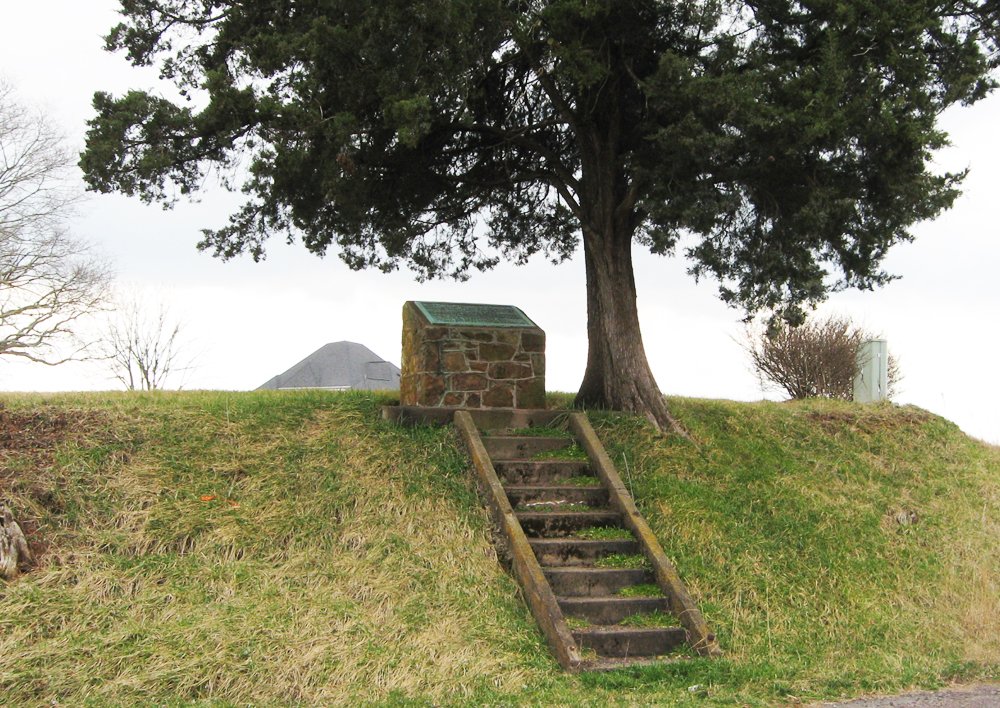 Today, the site where this major battle took place is managed by The Brandy Station Foundation and the Civil War Trust. In 1990, the National Park Service surveyed the land and recommended the preservation of 1,262 acres at four separate areas. The hard work and dedication of these organizations have kept the site from a proposed commercial enterprise which included a Formula 1 racetrack. In 2003, Brandy Station Battlefield Park opened and remains so today.

On the morning of Jun 9, 1863, General Buford’s cavalry crossed the Rappahannock River at Beverley’s Ford and attacked William "Rooney" Lee's brigade as part of an effort to break through Confederate lines. The brigade led by General William E. “Grumble” Jones was located only a few hundred yards south and heard gunfire and rushed to the scene. Jones’ brigade engaged with the leading brigade under the command of Colonel. Benjamin F. Davis which temporarily halted the Union progress just shy of J.E.B. Stuart’s artillery.

Once the Confederate artillery battery noticed this, they were able to position one or two cannons toward Buford’s men which allowed the remaining Confederates to escape the attack and form a Confederate line at St. James Church. It was at this location where the majority of the fighting took place. Union Major Robert Morris Jr. lead the 6th Pennsylvania Cavalry in an unsuccessful charge toward the Confederate lines which resulted in the greatest loss of life among all the regiments in this battle.

With effective fire coming from the Confederate artillery, Confederate forces were able to rally. Rooney Lee’s brigade was positioned behind a stone wall and on Yew Ridge which was situated between Buford and his objective. After an intense battle, Confederate soldiers began to fall back which had surprised the Union forces. This was not only due to their efforts, but the efforts of General David Gregg and his cavalry. Gregg and 2,800 men had crossed the river approximately 6 miles south. Gregg had originally planned to take the roads leading straight into Brandy Station however, that route was blocked Stuart was able to hold a superior position at Fleetwood Hill where he had camped the night before.

On Fleetwood Ridge, Maj. Henry McClellan ordered Lt. John Carter and his small battery to crest the hill and engage while he sent word to Stuart that the hill was under attack and needed reinforcements. Carter was able to fire a few rounds from the cannon, slowing the Union advance. After a short standoff, Col. Percy Wyndham and his men broke from Gregg’s forces, headed up the western slope of the hill, only to be met by Jones’s brigade who had just withdrawn from St. James Church. Simultaneously, Col. Judson Kilpatrick charged around the East of Brandy Station and attacked the southern and eastern slopes. This charge was halted by Hampton’s Brigade who were falling back from St. James Church as well. Numerous charges and countercharges ensued for a few hours before the Confederates were able to clear the hill. Col. Duffie’s men showed up too late to affect the outcome.

Meanwhile, Rooney Lee continued to confront Buford. Buford and his men lead a series of charges at Lee which prompted him to fall back to the north end of the hill. With reinforcements from General Fitzhugh Lee’s brigade, Rooney Lee was able to launch his last assault on Buford. At the same time, Pleasonton ordered a withdraw, ending the ten-hour battle. Approximately 20,500 men took part in this battle with 866 Union casualties and 433 Confederate casualties. Robert E. Lee’s son, William Rooney had also been shot in the leg and was sent to Hickory Hill where he was captured by Union forces two weeks later.