The Eliot School Rebellion on March 7th, 1859 started a national awakening throughout the Catholic community. In a Monday morning class, a young boy by the name of Thomas Whall was whipped for thirty minutes by his assistant principal for refusing to read the Ten Commandments from the Protestant King James Version of the Bible. Whall was from an immigrant Irish family, and his parents pressed charges against the assistant principal in court. Although the court ruled the assistant principal to be innocent, the nearby Catholic church created St. Mary's Institute, one of the first Catholic parochial schools, for Thomas and his fellow Catholic classmates that left the Eliot School that day. 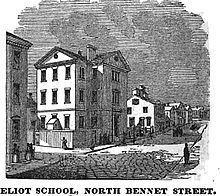 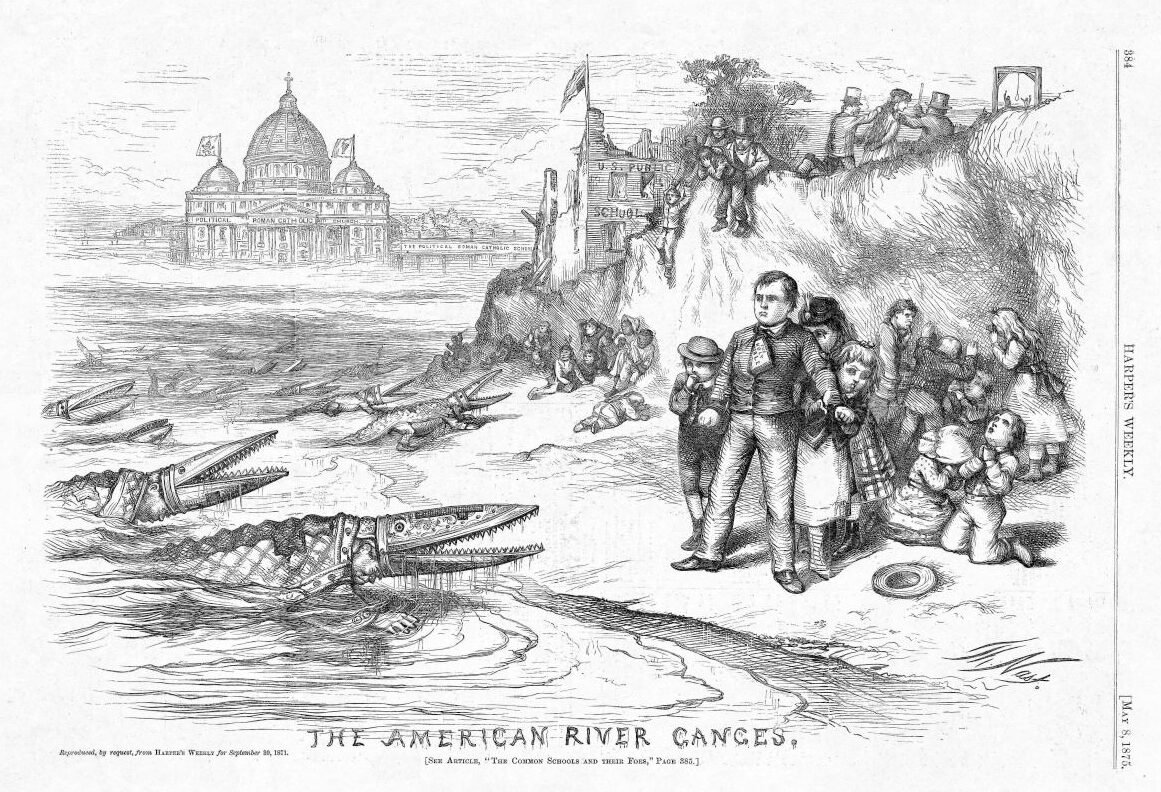 Young Thomas Whall with a goblet from the Catholic community in Covington, Kentucky, and several medals from Catholic churches throughout the nation 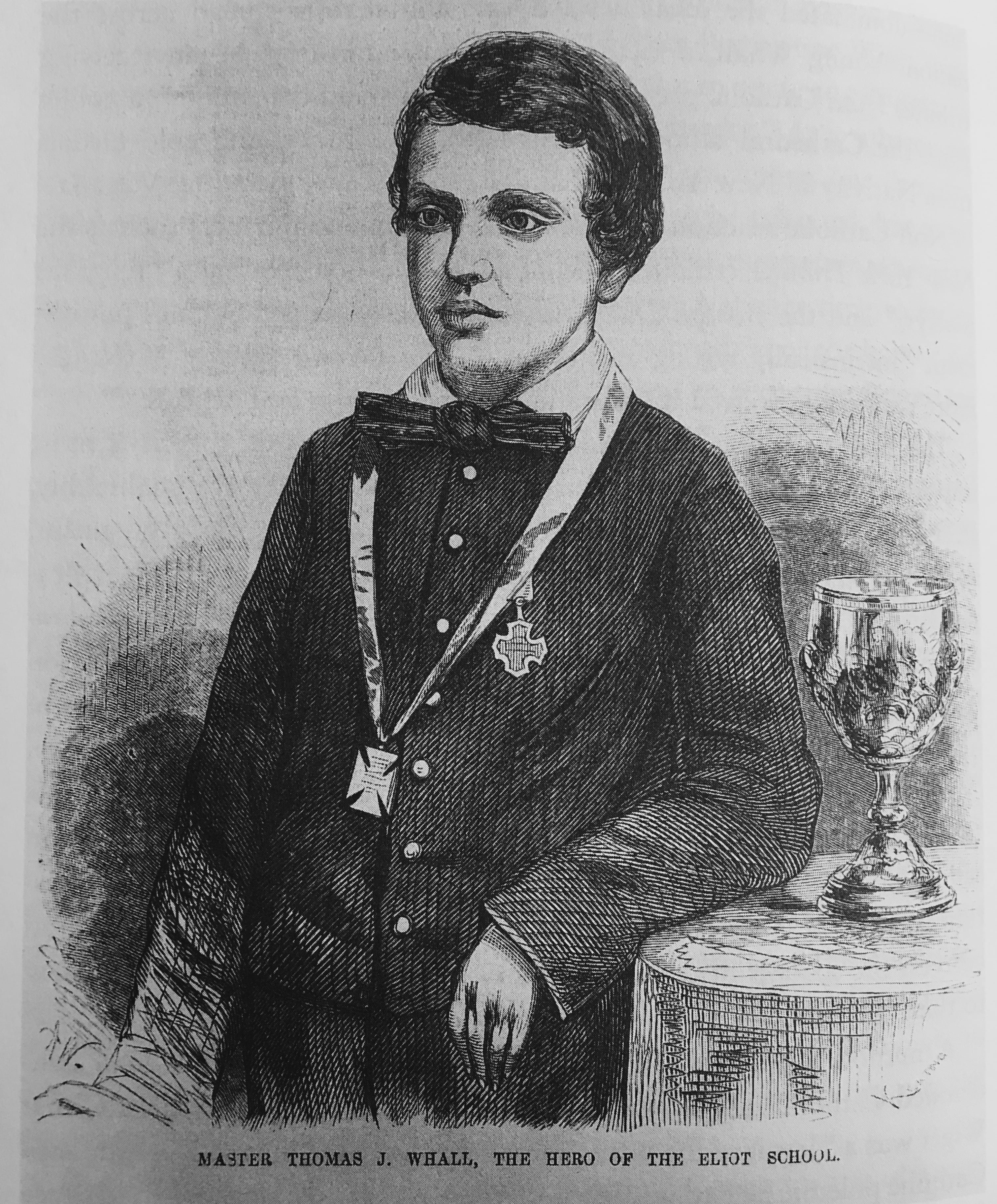 At first glance, the present day Eliot School is nestled in Boston’s North End on Charter Street with its new location and successful students, holding no visible remnant of its history of religious discrimination from almost two hundred years ago. As part of the Boston Public Schools, it boasts of its role in history starting in 1713, having produced alumni such as Samuel Adams and Paul Revere. Yet the institution tainted the Bostonian education’s history with the Eliot School Rebellion, which spurred the genesis of Catholic schools and their spread across the Boston area.

In 1829, the coexistence of Catholic and Protestant communities seemed to be as Bishop Fitzpatrick claimed: that “there was no great danger if Catholic children attended such [public] schools if Church leaders… protected the the youngsters from discriminatory practices”. Yet the Boston public schools Fitzpatrick referred to were still tinged with Protestant traditions after official denominationalism was removed. Though the de jure discriminatory rules were no longer in place, textbooks presented Catholicism in a negative and disrespectful perspective, Protestant hymns were sung, and the King James Version of the Bible was read.

However, as immigrant population in the North End public schools approached to be near half the proportion of the community in the 1850s, the growing religious diversity presented more and more opportunities for the Protestant status quo to be challenged. On March 6th, 1859, ten year old Thomas Whall heard Friar Bernadine Wiget preach about being proud of reciting Catholic prayers, encouraging Thomas to refuse to practice the Protestant version of any religious prayer or reading. He decided in his Monday morning class at the Eliot School to do exactly that. His teacher, Abbie Shepherd, asked each boy to read one of the Ten Commandments. The first six Protestant boys did not have a problem, but when Thomas was called to read about the Holy Day, he did so from his Catholic catechism. It went unnoticed until he replaced the King James Version word “sanctified” with “hallowed”. Shepherd demanded that he read from her book, but after much insistent argument, Shepherd dismissed him from school. Thomas’s father was proud of his son for his refusal to comply, and Mr. Whall spoke with the school principal, coming to an agreement for Thomas to be allowed to read from his Catholic catechism.

The following Monday, the same incidence occurred again. Thomas told Shepherd that the principal had allowed it, but she called in the assistant principal, McLaurin A. Cooke, who refused to believe him. Cooke beat his hands with a rattan stick for half an hour, while many of Thomas’s classmates shouted words of encouragement to not give in. Multiple accounts reported that Thomas never did, but from the account of Thomas himself, forty-five years later, he claims that a school committee member named Mr. Hazeltine entered during the beating and informed Thomas that his father had instructed him to read from the Protestant Bible. The appalled boy started mumbling the commandments and soon fainted from the beating. That day, about one hundred boys were discharged from the school. It turns out that Thomas’s father said no such thing, and when Thomas’s parents learned of what had happened, they sued Cooke for use of excessive force. In the court ruling, given by Judge Sebeus Maine, Cooke was released of any charges as “Bible reading without any comment is no interference with religious liberty”. Cooke’s attorney even attacked Friar Wiget, asking “Who is this priest here who comes from a foreign land to instruct us in our laws?” Though no legal headway was made with the case for the Catholic people, this rebellion drew attention throughout the national Catholic community; many churches sent Thomas medals and pictures commending his bravery.

Following the rebellion, Thomas’s church created an elementary school, later named after Bernadine Wiget, for the Catholic boys that had left the Eliot School. This school was just one of many parochial schools that Catholics became motivated to start. The voice of diversity in religious beliefs in schools will eventually lead to the 1963 case School of Abington Township v. Schempp, which challenged whether the requirements public schools made for students to participate in religious exercises such as the mandatory reading from the Bible before school was unconstitutional and violated the 1st and 14th amendment. Horace Mann’s idea of a “common school with a common religion” certainly no longer held after the Eliot School rebellion.