The Church of the Presidents

The Church of the Presidents Museum is located in Monmouth County New Jersey. The site is significant because several presidents from the late 19th century attended the Episcopal Church (now, Museum) while vacationing in the area (Monmouth County being a popular vacation spot for the elite during the late 19th and early 20th centuries).

A side view of the church. The red bricks at the bottom of the structure are noteworthy. 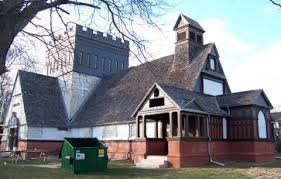 A back view of the church. The tall height of the building is apparent. 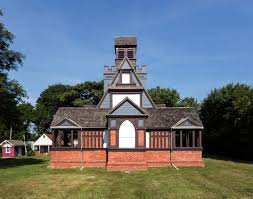 A front view of the church. The Gothic architectural style is noteworthy at the top left portion of the building. 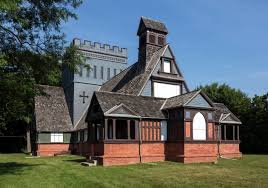 Monmouth county was an immensely popular vacation destination for the elite and wealthy throughout the late 19th and early 20th centuries. The area was the pinnacle of affluence for the upper class during this time period. Famous American families such as the Vanderbilts, Goulds, and Drexlers all lived in Monmouth County during the summer. Not only did famous families reside in and visit the area, but politicians from Washington did, too. The area was so popular that even presidents and their families took vacations there, too. This included: Mary Todd Lincoln, Ulysses S. Grant, James A. Garfield, Benjamin Harrison, Rutherford B. Hayes, Chester A. Arthur, Woodrow Wilson, and William McKinley.

Many of these people were also noted as being members of the St. James Episcopal Church, which was located in close proximity to the beach and ocean. St. James Episcopal Church was also an attractive place to worship for the wealthy due to the incredible gothic architecture that the building embodied. The church was constructed in 1879 during the beginning of the Gothic Revival period in American architecture. During this time period, Monmouth County saw an influx of gothic style real estate development being applied to mansions and other structures by the wealthy in the area. This further established the area as a notable place of affluence for the elite of the country.

The services at the church were often grandiose and lavish during the Gilded Age. It was not uncommon for both a sitting and former president to attend a service with their families. Members of the upper class were also spotted at the church in conjunction with the famous politicians. Reporters were sometimes sent to write stories on the lavish things that took place at a typical service. For example, it is said that donations during a typical mass would often reach a total of 10,000 dollars. The church was popular and thriving, especially during the late 18th century, until the beginning of World War I. Woodrow Wilson was the last sitting president to attend St. James Episcopal Church.

The church and Monmouth County area fell out of favor with the elite during World War I. By the mid-20th century, the church had a small number of members and received little monetary funding. Because of this, officials from the church petitioned Congress to make the location a national historical site. The efforts from the church gained national recognition and because of this, the church was taken over by the Long Branch Historical Museum Association. The site operated as the Church of the Presidents Museum, once it was acquired by the Long Branch Historical Museum Association, until the early 21st century. At the beginning of the 21st century, the site was shut down due to architectural damage that was sustained from inclement weather. The church is still not up and running today and is at risk of being demolished. It is important that the site is preserved in the wake of the recent real estate development that has occurred in the Monmouth County area today.

Koennemann, Kristen. "There's No Chapel in the World Like This One in New Jersey." Onlyinyourstate.com.
https://www.onlyinyourstate.com/new-jersey/historic-presidents-chapel-nj/ (Accessed April 16th, 2019)