The home at 2102 Pine Street, a three-and-a-half story building faced with green stone, was once the home of Edward Drinker Cope. Cope was one of the most highly regarded paleontologists of the nineteenth century. He was also an accomplished in other scientific fields and his home was reportedly filled with skeletons and specimens. The home, which is now an apartment building, is listed on the National Register of Historic Places.

Historic marker outside the Cope House 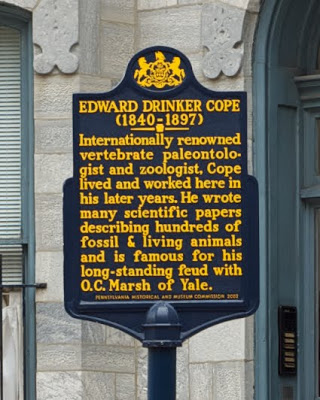 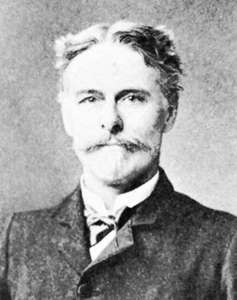 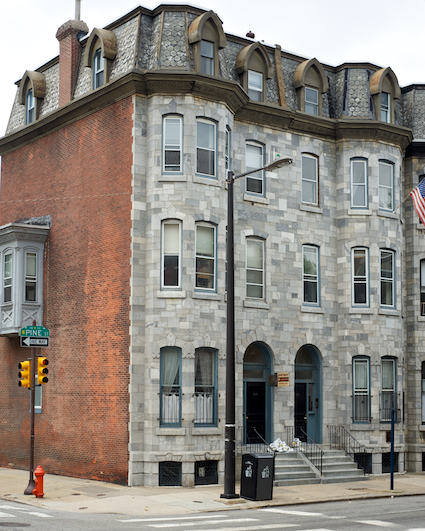 The two homes at 2100 and 2102 Pine Street were built in about 1880 and were purchased shortly thereafter by Edward Drinker Cope. Cope had inherited a large sum of money and planned to live in 2100 and use 2102 for storage and workrooms. The buildings are three-and-a-half stories and are faced in a stone that is unique to Philadelphia.

A native of Philadelphia, Cope dedicated virtually his entire adult life to scientific research. Although he taught briefly at Haverford College, his wealth allowed him to devote himself to his research interests without maintaining a regular job for lengthy periods of time. He traveled extensively in the West and discovered fossils of hundreds of extinct species.

In 1886, Cope invested a large sum of money in a New Mexico silver mine. As a result, he lost most of his inheritance and had to return to Philadelphia and accept a position at the University of Pennsylvania. He taught zoology and comparative anatomy at the university until his death in 1897. The loss of his fortune also required Cope to rent out 2100 and move into 2102, which was essentially a repository for his manuscripts, books, and specimens. A friend of Cope's once described the building as being filled with floor-to-ceiling stacks of books and specimens, completely covered in dust, and virtually nothing in the way of furnishings.

In addition to work as a paleontologist, Cope also made significant contributions in the fields of herpetology, ichthyology, and geology. He is credited with roughly 1,300 titles, an accomplishment which is all the more remarkable considering that Cope lacked professional credentials. To allow him to teach at Haverford, the college arranged (probably because of his family's influence) for him to be given a Master's degree.

Cope died in his home in 1897, leaving his brain and skeleton to science.