This historic theater opened in 1928 before a crowd of over 100,000 people who gathered to witness the celebration of what would become Knoxville's leading theater. Many of the leading acts in the nation, including the Ziegfeld Follies and the Marx Brothers graced the stage of the Tennessee Theatre in the next year. While live performances were an essential function, the venue served primarily as a movie theater during the golden age of cinema. Many films even chose this theater to host their premieres, including Tennessee Johnson (1943), So This is Love (1953), and A Death in the Family (1963). After the rise of multiplex movie theaters in the 1970s, however, the Tennessee adapted and served primarily as a performing arts venue. In 1999, this venue was named the State Theatre of Tennessee as part of an effort to support renovation and restoration of the aging theater. Fundraising for renovations followed, and work was completed in 2005 when the theater reopened. Today, the Tennessee Theater showcases live performances, ranging from tours of Broadway productions to local musicians, with occasional showings of classic movies.

The Tennessee Theatre in 2007. 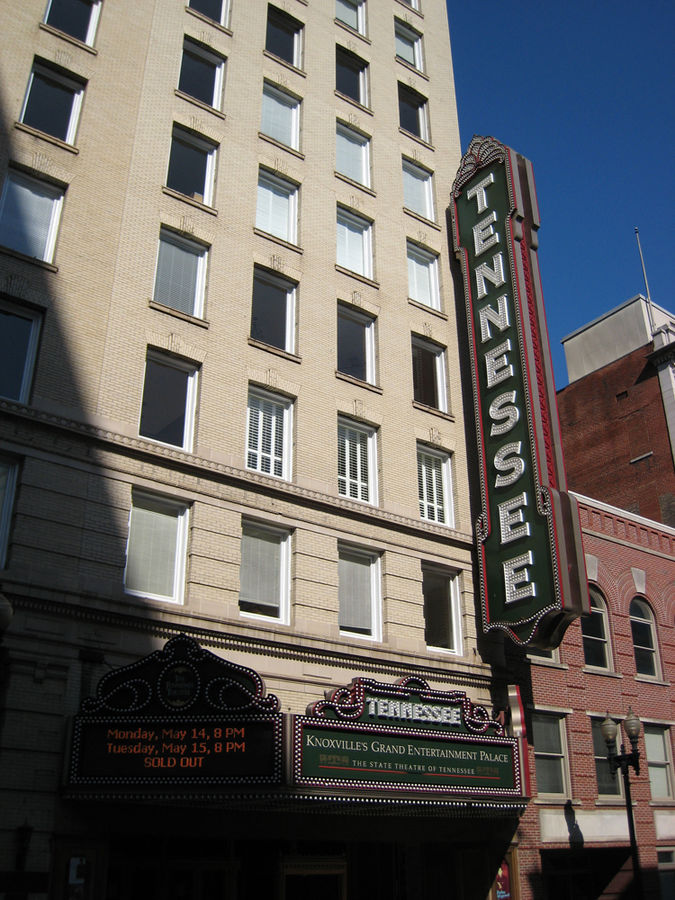 The most popular movie ever shown at the theatre was Disney’s "Snow White." In just one week, around 70,000 people saw the film during its 35 showings. Photo by Brian Stansberry. 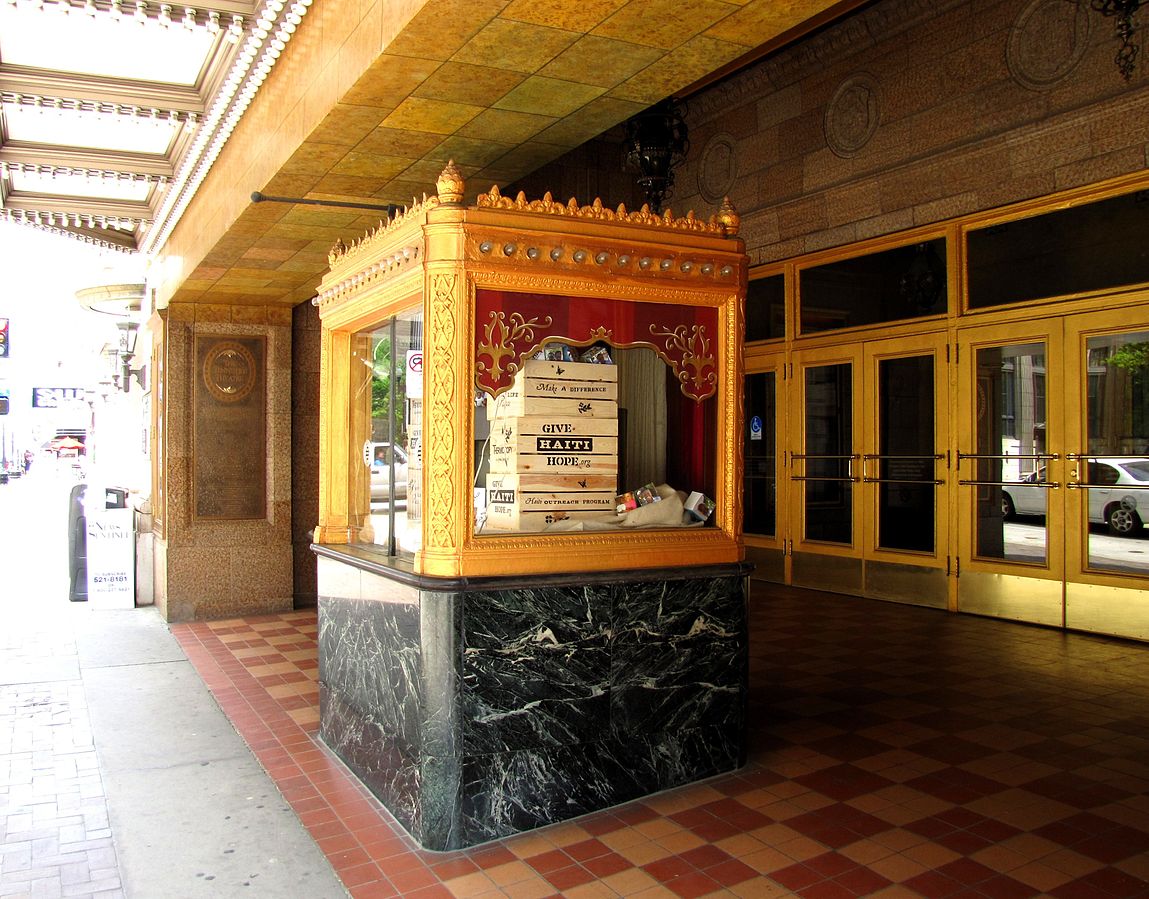 In 1936, a double wedding was held on stage as part of a promotional contest. The winners were brothers Ben and Claude Easterday and their wives Mary Alice Hall and Lula Myrtle Norman. 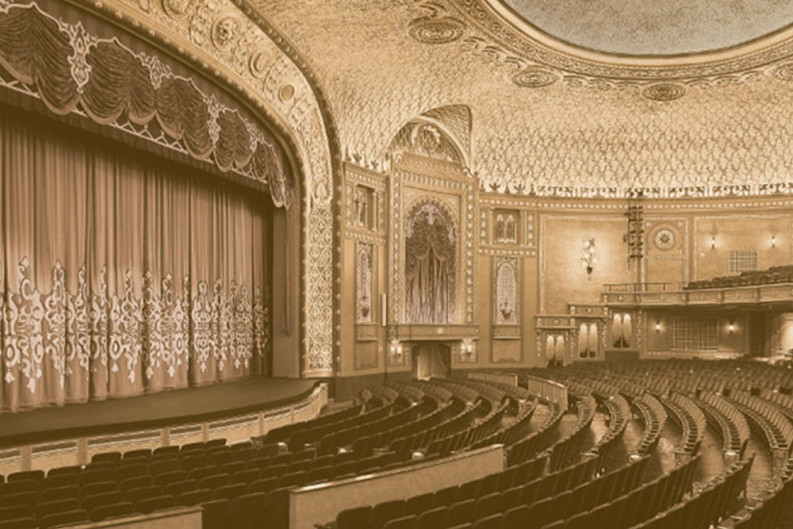 In 1917, Clay Brown Atkin bought the future site of the Tennessee Theatre. It was another eight years before architect R.E. Hall drew up plans for the theater's construction. Ultimately, however, it was the design of Graven and Mayger that was chosen for the project. This pair operated in Chicago and built eighteen movie houses during their fifteen-month partnership. Of these eighteen theaters, only two (the Tennessee and the Alabama in Birmingham) survive.

Construction on the Spanish Moorish style theater was undertaken by the George A. Fuller Company (also of Chicago) from November 1927 into 1928. The finished building featured French-style chandeliers, Italian terrazzo flooring, and carpets and drapery with Asian motifs. It was also one of the first public places in Knoxville to be equipped with air-conditioning. In total, the Tennessee Theatre cost the Publix Theatres chain over one-million dollars to build.

More than 100,000 people attended the theater’s opening night showing of The Fleet’s In starring Clara Bow on October 1, 1928. During its early years, the theater would show two feature-length films a week in addition to cartoons, newsreels, short films, and live performances. One of its biggest acts was the “Tom Mix Roundup” in 1933. The actor, known for Westerns, rode his horse onto the stage ushering in his mini rodeo and circus acts. In 1935, the first touring Broadway show came to the Tennessee Theatre: Mary of Scotland with Helen Hayes. The one-night performance sold out. However, the most popular live show ever at the theater was the Ziegfeld Follies, who came to Knoxville in February 1935. The Follies comprised of over one-hundred performers, including comedian Fannie Brice. Other famous visitors to the Tennessee during the 1940s include band leaders Glenn Miller and Desi Arnaz.

Big changes came to the Tennessee Theatre in the 1950s and 1960s. In 1953, the Tennessee installed technology so that it could exhibit Cinemascope films, which had a larger aspect ratio than previous movies. School children were invited to watch The Robe (a Cinemascope film) at the theater, making it one of the first times African Americans were allowed inside as guests. After months of protests in 1963, the Tennessee Theatre finally became desegregated, starting with a showing of To Kill A Mockingbird. Later in the decade, the theater was fitted with new carpet, wider seating, an enlarged concession stand, and other decorative improvements. One modification ended up not being an improvement at all: the re-raking of the balcony impaired the line of vision for patrons who sat there. This was corrected as a part of later renovations.

During the 1970s, the Tennessee was forced to close several times as audiences flocked to newer multiplexes. In the late 1970s, the theater began showing classic movies, starting with San Francisco (1936). However, in 1980, the Tennessee Theatre turned to primarily live shows. It still showed movies occasionally, though. One such occasion was a special showing of It’s a Wonderful Life in December 1981, which director Frank Capra attended. That same year, the theater was purchased by James A. Dick, who transformed it into a performing arts venue. The theater had some successes in the 1980s and 1990s, including a sellout performance by Robert Palmer and the recording of Kenny Chesney’s “Somebody’s Callin’” music video there in 1994. But, there were some problems with the theater, such as it being too small for bigger productions and lacking backstage space. So, in 1996, the Historic Tennessee Theatre Foundation was founded to restore and renovate the building.

In 2000, parts of the Mighty Wurlitzer organ, which was original to the theater, were sent to Reno, Nevada for refurbishment. It was returned the following year. When folk singer Nanci Griffith filmed a concert DVD at the Tennessee Theatre, she donated the price of admission toward the theater’s restoration. Extensive renovations began in June 2003 and were led by local architects McCarty, Holsaple, McCarty and the contractor Denmark Construction. The stage and the theater itself were expanded. The exterior was repainted in its original colors. The twelve-foot chandeliers in the lobby were repaired. New lighting was also installed. After a renovation of about $25 million, the Tennessee Theatre reopened on January 15, 2005. In 2019, the Tennessee Theater bought four floors of the nearby Mechanics Bank and Trust building. Plans to expand into the interior and create more room for patrons to socialize before and after shows are currently underway.