The beginnings of what is now known as the Keim Farmstead date back to c.1698 and the arrival of Johannes Keim to the Oley Valley. Keim’s son, Jacob, would eventually add to the property through marriage and assisted with construction on the two limestone buildings around 1753. The farmstead swelled to 320 acres by the late 19th century and remained in the Keim family until 1911. The farmstead is centered around the two limestone structures, one which served as the family’s home and the other, ancillary building, as a turner’s shop. It is believed both were built during the same time period. The Historic Preservation Trust of Berks County acquired the farmstead in 1978 and has administered it ever since. It was designated a National Historic Landmark in 2017.

The Keim residence on the left and ancillary building, or turner's shop on the left. 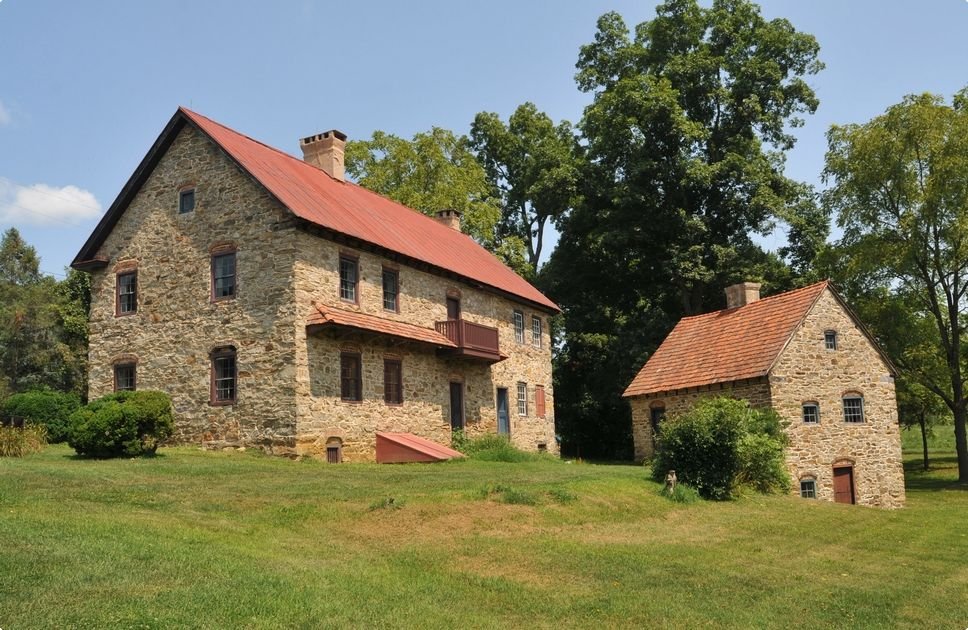 The interior of the Keim residence. 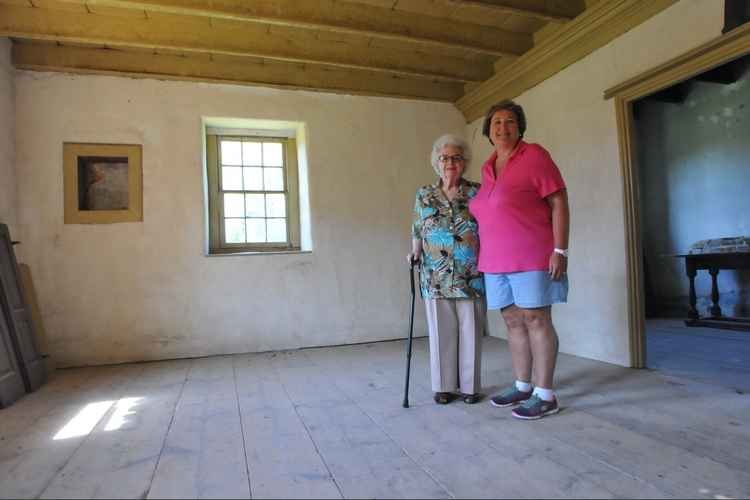 A couple walks past the 19th century barn. 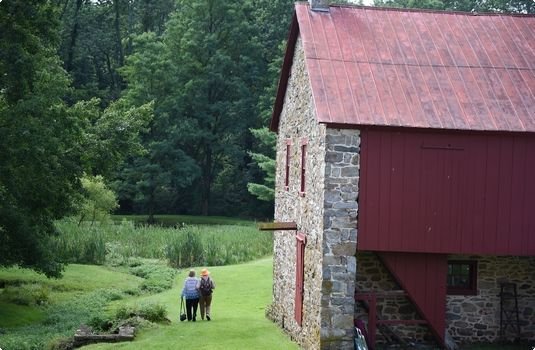 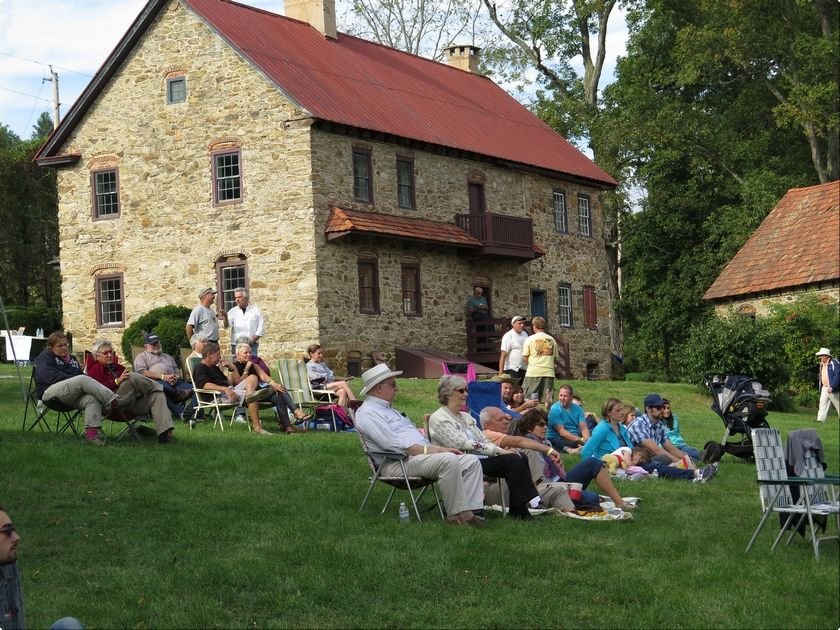 Inside the Hartman Cider Press which was moved to the farmstead in the 1970s. 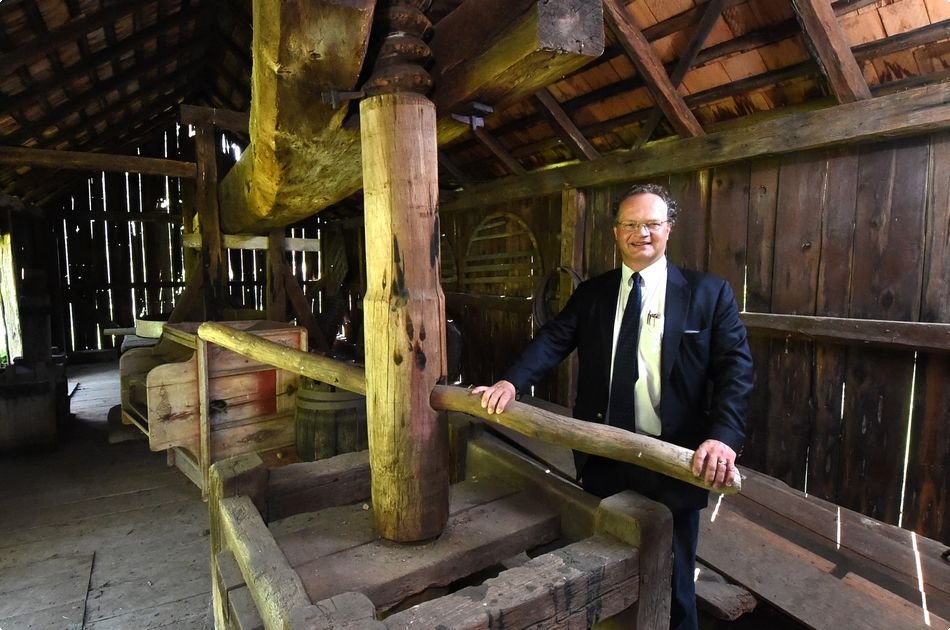 After Johannes Keim arrived in Philadelphia around 1698 from Bavaria, he searched for land similar to his former home.  He quickly found that in the Oley Valley.  He then returned to Germany in 1706, married, and came back to Pennsylvania either the same year or early in 1707.  He became one of the earliest European settlers in the valley and built a log home on the property in 1708.  Johannes died in 1758 and it is assumed he was buried in the family cemetery across the road from the farmstead.  Jacob Keim, the youngest son born to Johannes’ first wife, married Magdelena Hoch in 1746 and gained the property through his marriage where the turner’s shop and residence would be built.  Jacob would add property to the farmstead and by 1767 it had grown to 126 acres.

In 1753, Johannes and Jacob hired Philadelphia masons to build the stove-room house as well as the turner’s shop.  At that time, a turner was an artisan who shaped chair and table legs, balusters and spindles on a lathe.  The home followed the typical plan of a stove-room house with the fireplaces and central chimney as the most integral features.  On the first floor, the massive fireplace was shared with the kitchen on one side and the stove-room (family area) and a bedroom on the other.  The lay-out was similar on the second floor with the fireplace being shared by the bedrooms.  In this manner, every room had access to heat through the use of large stoves.

It is thought that the 1.5-story turner’s shop was built the same year.  It features a vaulted roof and cellar that was used to store vegetables.  It also had a small spring flowing through it.  Eventually, the structure was banked in a manner similar to a banked barn.  Although Jacob’s turner equipment and tools have been lost to history, there is still evidence on the structure’s walls and floors as how the shop was equipped.

As the Keim family grew, an addition was added to the residence sometime between 1815 and 1820.  The land and buildings remained with the Keim family until 1911.  It was then purchased by Mahlon Boyer in 1913 who built a small sawmill on the property.  The property was later donated to the Preservation Trust of Berks County by M. Richard Boyer in 1978.  Also on the property is a stone vaulted and sod covered root cellar c. 1750 and a 19th century stone foundation barn.  Last to arrive was the Hartman Cider Press which was moved from its original location in the 1970s.  The Keim Homestead is open for tours by appointment only.

Open for tours throughout the year by appointment only.