The arrival of railroads in Fullerton, LA was the first major growth of the population in Vernon Parish. Fullerton had a major lumber company, Golf Lumber Company. This company had been operating for 20 years and had cut all 97,000 acres of trees. On May 6, 1927, the last tree was finally cut down. The cut-off land was either sold to the federal government, or became part of the Kisatchie National Forest or Fort Polk military reservation. You can still visit this site "at the Fullerton Lake Recreation Complex in the Kisatchie National Forest." 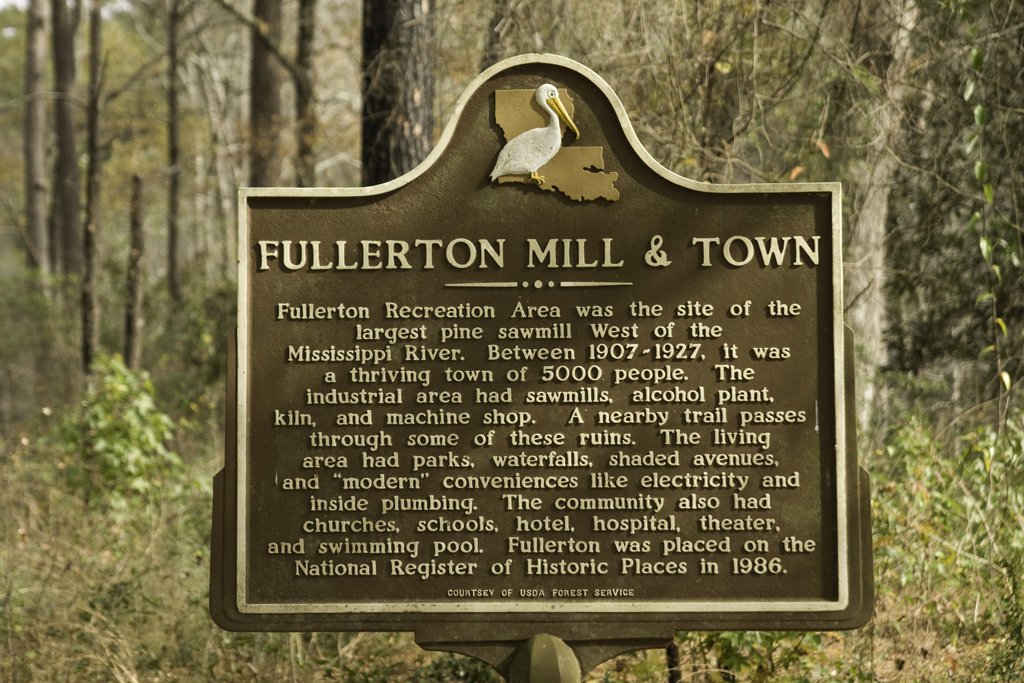 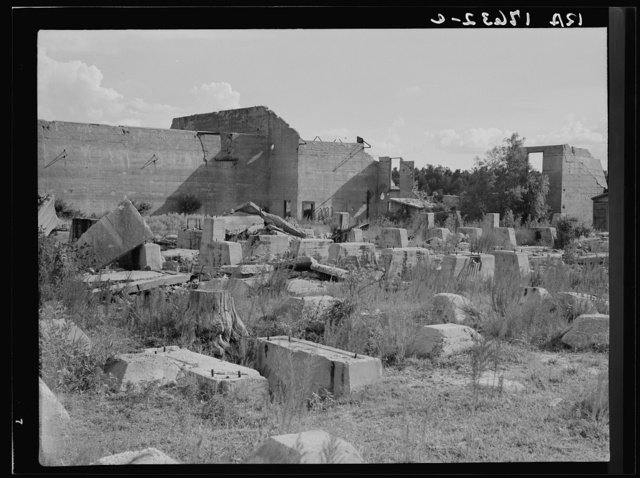 A picture of one of the old ruins. 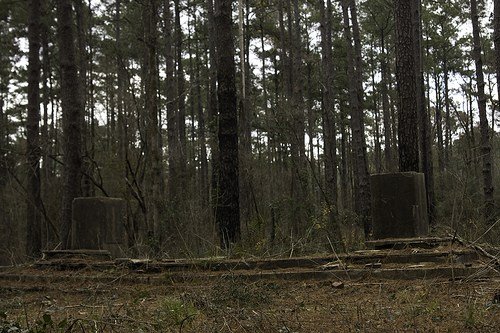 Picture of the community swimming pool

A picture of the company.

A picture of the lumber yard.

Another picture of one of the ruins. 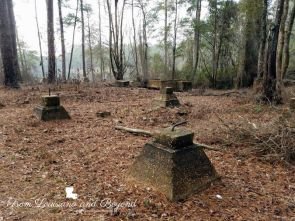 Fullerton is a town in Vernon Parish located near Pitkin, LA. At first, the town had a small population. Then, in 1907, “the arrival of the railroads…heralded the first major population boom in Vernon Parish,” (1) especially in Fullerton. The town grew and the citizens built a sawmill company. The sawmill company did well until the final tree was cut down, which put it out of business. As a result, that part of town became abandoned. These ruins became a site called Fullerton Lake Recreation Complex, and everyone can visit the ruins.

The town grew into a big lumber industry. After the arrival of railroads, “trains made travel to the area much easier -- and even more importantly, created a reliable method of transporting goods to and from the area"(2). The workers were “offer[ed] comfortable homes and a regular income”(3). Their “homes were painted and had electricity and indoor plumbing”(4). Fullerton built “a hospital, dentist, commissary, cafe, post office, drug store,”(5) swimming pools, schools, churches, and many other facilities. The town’s population increased with more workers.

The town grew, according to the 1910 census and the 1920 census. For example, “the 1910 census listed a total of 1,550 citizens with 660 being employees of the company… approximately 500 of those citizens were Afro-Americans....The 1920 census shows a population of 2,412 citizens and lists 41 Mexican tram track employees among the workers”(6). Fullerton gave “500...Afro-Americans”(7) houses; they “lived in a separate area [and] described [it] as being...excellent and beautiful, with painted cottages and running water”(8). Also, according to the 1910 census, immigration affected the town. Mexicans, for example, worked at jobs in this town. Not only did their population increase, but it was also integrated.

Fullerton’s timber companies“built railroad spurs that went into the woods where they were cutting the trees”(9) to get timber to the mill. When workers woke up “every morning the train hauled the men into the forest to work. Throughout the day, these same trains hauled the timber to the mill as it was cut, and at the end of the day, carried the men home”(10). Fullerton had mills “made of steel and concrete, the first of that type built in the south”(11). This company had an “average daily cut for a ten hour shift at the two mills [which is] 350,000 feet, though at times this average was much exceeded”(12). After twenty years, the final tree was left standing. The company showed “their appreciation for all their workers, [by choosing] one white and one Black man...for the honor of cutting the final tree on May 6, 1927”(13). After those twenty years, “97,000 acres”(14) of timber had been cut down.

After the final tree was cut down, the business shut down because it took many years for all the trees to grow back, so they couldn’t keep the business going. People scattered, and “some buildings were sold and moved, some dismantled and carted away”(15). Much of the “cut-over land was sold to the Federal government [and] some...became part of the Kisatchie National Forest, while some became part of the Fort Polk military reservation”(16). In 1986, the Fullerton Lake Recreation Complex was created in the Kisatchie National Forest.

The Fullerton Lake Recreation Complex shows the ruins of the sawmill that “may be seen on the 1.6 mile Fullerton Mill Trail”(17). The “points of interest are identified along [that] 1.6 mile Fullerton Mill Trail which loops around the old Mill Pond”(18). Throughout this trail, one can see different ruins, such as the schools, the swimming pool, part of the mill, and many parts of the town. Also, the complex has “picnic facilities, camping areas for trailers, campers, and tents, fire rings, bank fishing...hiking and biking trails, flush restrooms, water, and trash receptacles”(18). The most visited areas are “on-site camping, recreation trails, full service rest-room facilities, a large pavilion, and, of course, lots of fishing”(20). The complex also holds “annual Fullerton Sawmill Day festival [which]... includes historic displays, music, food, and lots of fun”(21). This complex shows an important history of Louisiana based on the ruins of the sawmill, and of the town. The ruins tell a whole story of what happened during the early 20th century.