The Alma Mater statue at Columbia University in Manhattan, New York has been a symbol of the university ever since its dedication in 1903. Harriette W. Goelet commissioned Daniel Chester French to design the statue in honor of her husband, Robert Goelet, who graduated from the University with the class of 1860. The bronze statue rests on a marble and granite base in front of Columbia University’s Low Library. 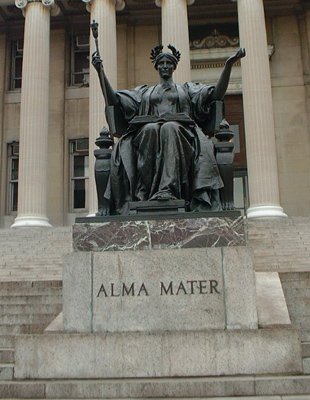 Columbia's Alma Mater statue was commissioned in honor of Robert Goelet, a member of the class of 1860 who helped finance the statue. Although the statue is unique to Columbia University, several other universities have a statue named “Alma Mater” on their campus. The term means “nourishing mother” in Latin, and was the motto of the University of Bologna, “Alma Mater Studiorum.” This translates to “nourishing mother of studies.” This motto is the first known connection of the term “Alma Mater” to the university from which one graduated.

The statue includes the author's depiction of a matronly teacher seated in a chair with symbolizing learning and wisdom, the laurel wreath upon the head symbolizing fame or victory, a scepter topped with a crown, and an owl, a symbol of wisdom, hidden in the folds of the statue’s robes.In fact, a local legend at the time of the statue's dedication suggested that any student who found the owl would marry a woman from Barnard, a sister women’s college, or that the first freshman to find the owl would graduate as valedictorian of his class. This piece of folklore dissipated as more women attended the university.

In 1928, the crown that tops the scepter was stolen and later returned after the university offered a reward. Some other pranks involving the statue even spread to other schools. In 1984, the statue’s entire scepter was stolen by visiting students from Cornell University, and it was returned covered in Cornell pennants after two months of absence. The statue was a symbol of the university, and as such, it has been the center of numerous protests against the university’s administration, especially during the Vietnam War. In 1970, a bomb was planted on the statue. When the bomb exploded, a portion of the statue’s throne was destroyed. Eight years later, the statue was removed for renovation, moving from the place of its dedication for the first time since its unveiling. The statue was rededicated that same year and remains a symbol of Columbia University.