Dating back to 1880, the Arcade and Attica Railroad is one of the last "common carrier" shortline railroads that operate both passenger and freight trains. The line spans from Arcade to North Java, and the line once extended to Attica but that route ended when the Tonawanda Creek flooded in 1957. The railroad offers passenger excursions on the last working, working World War II-era passenger steam train in the state. It begins in Arcade at the historic depot, which contains a small museum featuring historic railroad-related items on display, and ends at the Curriers Station on Chaffee Road a few miles to the north. A variety of rides are offered including murder mystery rides, fall foliage tours, Halloween rides, and Santa Express trains. Civil War Days events are held as well.

The excursions begin at the Arcade Railroad Depot, which also features a small museum and gift shop inside. 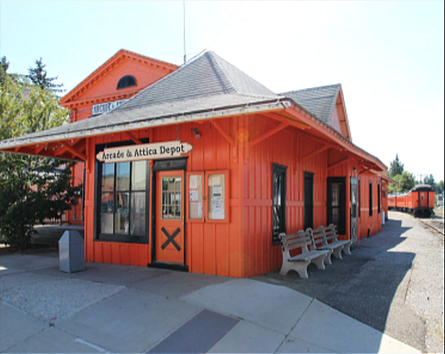 The Curriers Station marks the end of the excursion route. There, passengers can get a close up look at the locomotive. 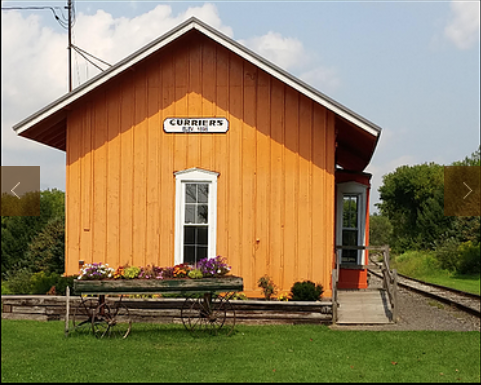 The freight trains ship agricultural and dairy products and other commodities between the two cities and continue north on the Buffalo and Pittsburgh line to service additional communities. The railroad was incredibly important for the development of Wyoming County and for this reason it was added to the National Register of Historic Places in 1980- a decade after the rail line began operations.

Railroads were critical for economic development not only in New York but throughout the country as well. However, it took some time for railroads to fully develop in Wyoming County and the surrounding region. After the Civil War, some railroad lines were built in the area but were relatively short and disconnected. Finally, the situation improved when the Pennsylvania Railroad, which wanted to reach Buffalo, bought these railroads and linked them together. The result was the Buffalo, Attica & Arcade Railroad (B.A. & A.), which opened the line between Attica and Curriers Corners in 1880.

The Buffalo and Susquehanna Railroad eventually bought the B.A. & A. and by 1917 was considering closing the section between Attica and the Curriers Station. Hundreds of local businessmen (365, to be exact), who relied on the railroad, bought the line in response to this potential threat to their commute. These owner-passengers formed the Attica Railroad Company, which still owns the line today. The flood in 1957 severely damaged the part of the line between North Java and Attica and the company could not afford to repair it. However, since most of the freight traffic occurred between Arcade and North Java, it made economic sense to abandon that portion of the line.

The railroad reached its peak ridership in the 1930s, and despite the Great Depression, not a single employee was laid off. The company bought its first new locomotive, the #110 General Electric diesel engine, in 1941. It was so efficient that it kept the railroad profitable for many years.

As car and truck transportation began to overtake railroads throughout the country in the 1950s, railroads began to decline. The Arcade and Attica Railroad decided to add passenger excursion trips in the late 1950s to generate more income. These began on July 17, 1962, and have continued ever since.