The remnants of the Carrie Furnace remind all who view it of Pittsburgh's industrial past. 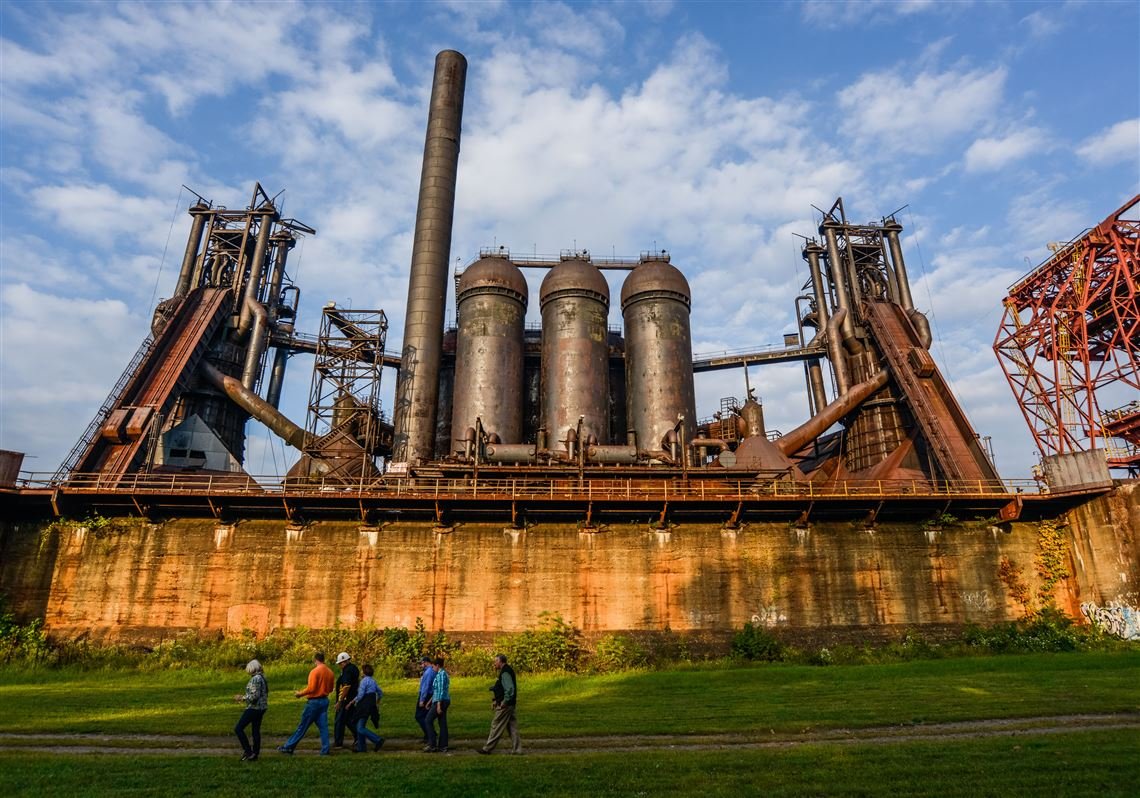 An aerial photo of the site. The Hot Metal Bridge (far right) once carried torpedo cars of molten iron across the Monongahela River. 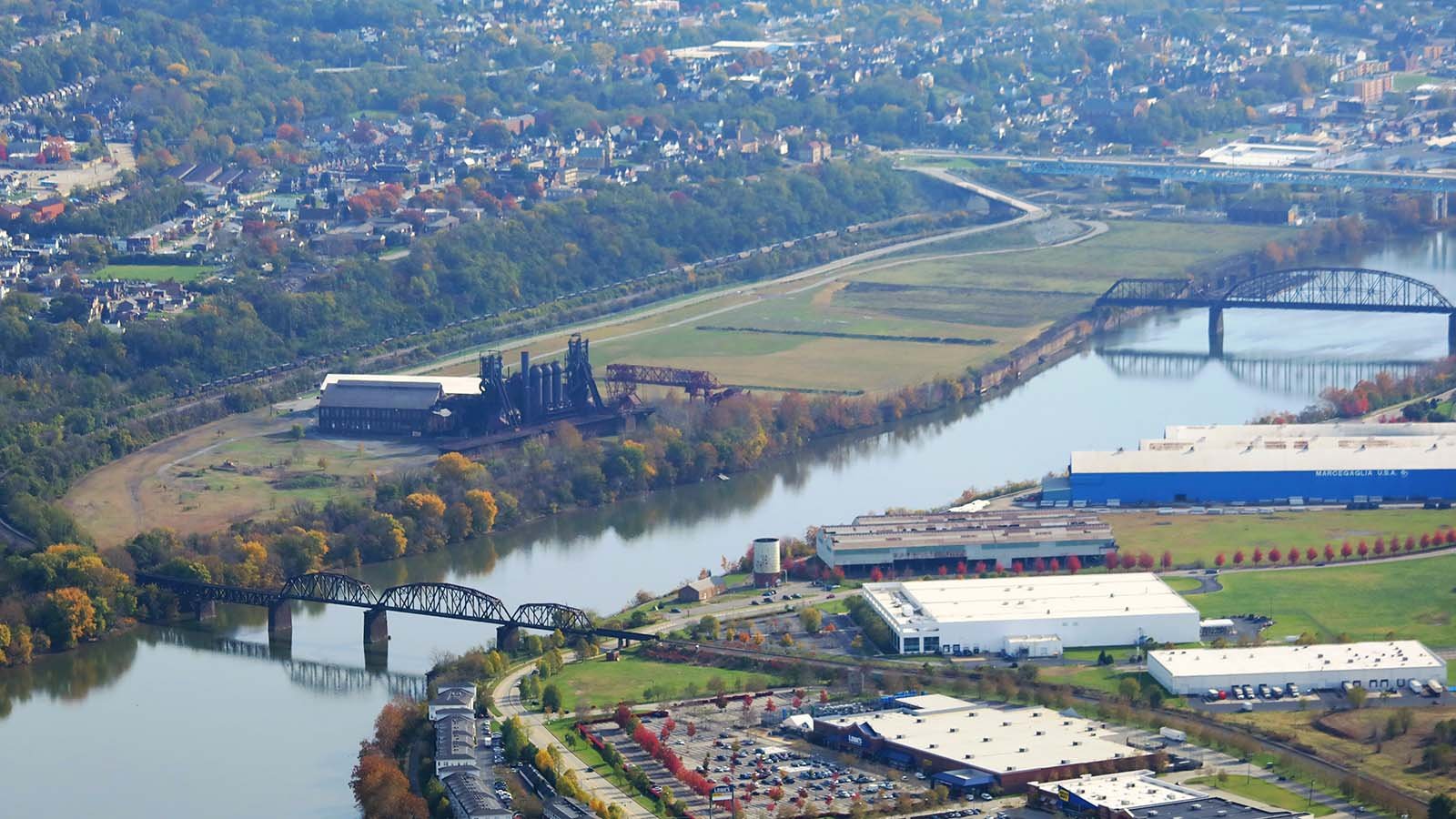 The Carrie Furnaces were once part of the larger Homestead Steel Works until the plant closed its doors in 1986. 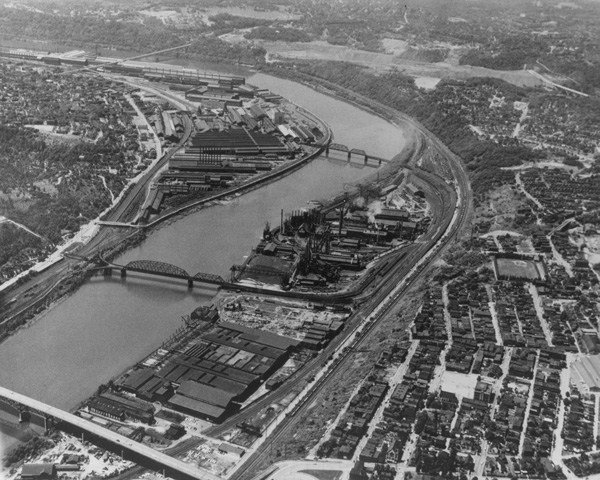 Carrie Furnace is now a popular site for "industrial" weddings. 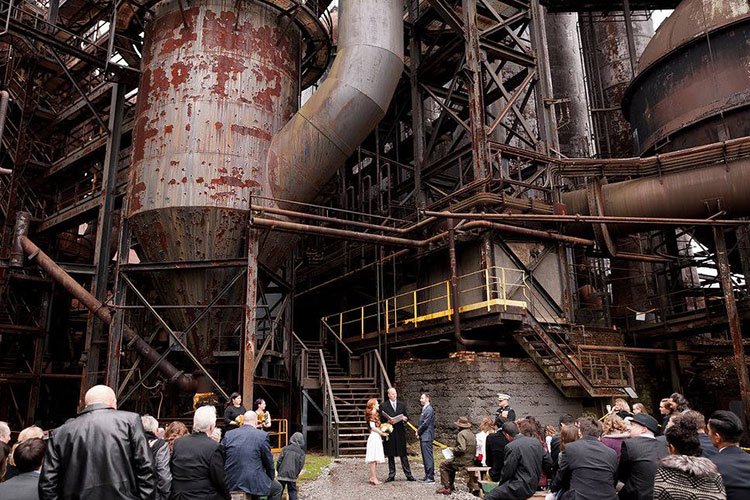 The Carrie Deer was created by "guerilla" artists in the late 1990s and is a popular attraction today. 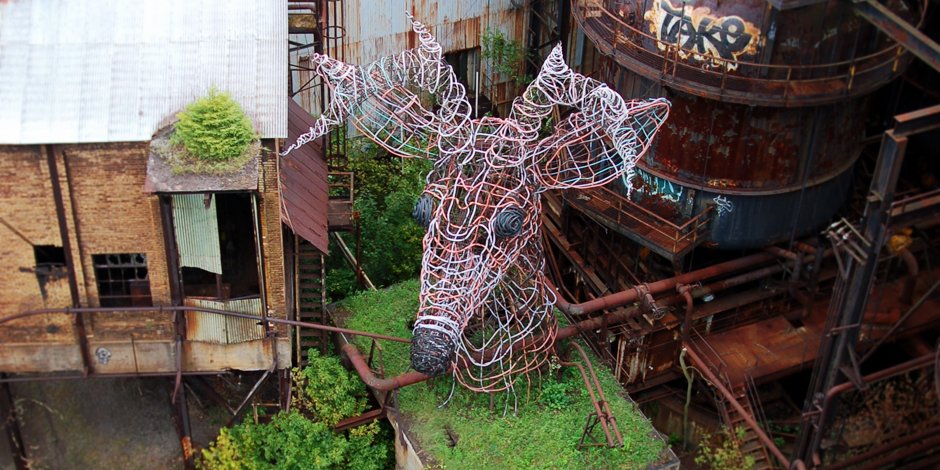 Founded in 1881, the Homestead Steel Works was purchased by steel magnate, Andrew Carnegie, in 1883 and incorporated into his larger Carnegie Steel Company.  It later became famous and infamous in 1892 when it was the site of one of the most violent labor disputes in the country’s history.  J.P. Morgan’s U.S. Steel then purchased Carnegie Steel, to include the Homestead Works, in 1901.

The two remaining furnaces (numbers 6 & 7) were built in 1907 to smelt iron which would then be converted into steel across the river.  Once fired up, the two furnaces rarely shut down and at their peak, produced over 1,000 tons of iron in a single day, consuming four tons of iron ore, coke, and limestone to produce each ton of iron.  The Monongahela River provided the five million gallons of water needed daily to cool the huge furnaces.  Despite the massive amount of steel the Homestead Works produced, especially leading up to and during World War II, all was not well at U.S. Steel.

As the 20th century progressed, many American steel companies faced the same serious problems, the two primary being failure to modernize and foreign competition.  After its peak production of the 1960s, it all began to fall apart for U.S. Steel and furnaces number six and seven were shut down in 1978 and the Homestead Steel Works produced its last steel in 1986.  The beginning of the end of the steel era had arrived in the Steel City.

The former steel complex was then purchased by the Park Corporation in 1988 which, in turn, sold it to Allegheny County in 2005 when its redevelopment plans never came to fruition.  The Redevelopment Authority of Allegheny County later partnered with the Rivers of Steel Heritage Corporation to clean up the site and open it to the public.  Carrie Furnace is now part of the larger Rivers of Steel National Heritage Area, an eight-county, nationally mandated National Heritage Area dedicated to “…preserving the industrial, cultural, natural and recreational resources of southwestern Pennsylvania.”

Today, Rivers of Steel conducts guided tours of Carrie Furnace from May through October.  The site is now home to a sanctioned graffiti area for aspiring artists; the Carrie Deer, a massive, 45-foot tall deer’s head constructed (sometime around 1997) of steel wire, pipe and other discarded pieces of metal; and the Iron Garden, a section of the former mill where nature has been permitted to reclaim the former industrial land. Carrie Furnace also hosts an urban art and photography tour and numerous weddings, concerts, beer tastings, and a regional qualifier for American Ninja Warrior in 2018.  There are currently plans for the further development of the site.

Tolliver, Sandra.  "The Carrie Furnaces site is ready for development.  What will it become?"  Next Pittsburgh.  March 27, 2017.  Accessed January 18, 2019.  https://www.nextpittsburgh.com/features/carrie-furnaces-site/