Students and Faculty Protest Racial Discrimination at the University Club

In 1944, students and faculty members held a protest after the University Club refused membership to Arthur E. Burke, an African-American graduate student. Merle E. Curti, a leading historian, recipient of the Pulitzer Prize, and member of the faculty, joined Burke in his protest against the club's racially discriminatory policy. Management responded to the protests by opening its doors to Burke and disavowing its previously discriminatory practices. The University Club was established in 1907, while students and faculty had protested discrimination in housing and public accommodations during the 1930s and continued to do so throughout the 1940s.

Although no photos of the incident are known to exist, the incident is documented in this book, The University Of Wisconsin: A Pictorial History-Click the link below for more information about this book 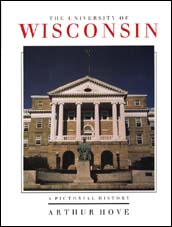 Burke returned to the University in 1944 from Howard, a historically Black university in Washington D.C. He intended to complete his residency requirement and teach several courses before completing his Ph.D. His letter to the club requested a room rental, then a standard practice as the club rented rooms to graduate students and short-term faculty members. Management approved his request and reserved a room for Burke. However, shortly after his arrival, club management informed Burke that he would not be permitted to remain in this room and offered to help him find other accommodations.

Burke related the incident to his history professor, Merle Curti, and the two men decided to protest the action. WIth Curti's connections, many members of the faculty and administration protested the action. Students also joined the protest, pointing out the hypocrisy of the denial as the nation fought fascism abroad. With support from the student newspaper, several student clubs, members of the faculty, and the University President, the club quickly acknowledged that it had made a mistake.