Hotel Auld stood from the 1820s until the mid 1960s. This four-story hotel once served as a stage-coach stop. One of the most famous people to stay in this hotel was seventh President of the United States, Andrew Jackson. Times he stayed included when he was on his way to inauguration in 1829 and also when he left office in 1837. Before the hotels demolition in the '60s, a guest at the hotel was questioned on Christmas day, 1963 by the police to see if he was was the one responsible for starting a fire that cost the hotel $100,000 and took the life of Earl Yaugher, according to local newspapers 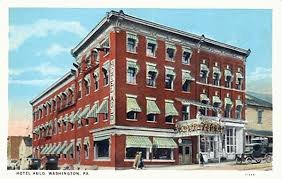