Mundelein College opened in 1930 with the support of the Sisters of Charity of the Blessed Virgin Mary. Mundelein also proved to be the last private, independent, Roman Catholic women's college in Illinois. During its sixty-one years, Mundelein admitted a diverse student body with women from a variety of ethnic and socio-economic backgrounds. Most of the students were also the first women in their families to attend college. The visually striking skyscraper speaks the growth of women's colleges in the 19th and early 20th centuries. In 1991, Mundelein College became an affiliated college of Loyola University Chicago and was later acquired by Loyola. Recognizing the history of Mundelein College, the building is now known as the Mundelein Center for the Fine and Performing Arts.

Looking northwest at Mundelein Center from Sheridan, where the road transitions from a north-south road to an east-west road. The building is located at the corner, and thus easily seen by travelers. 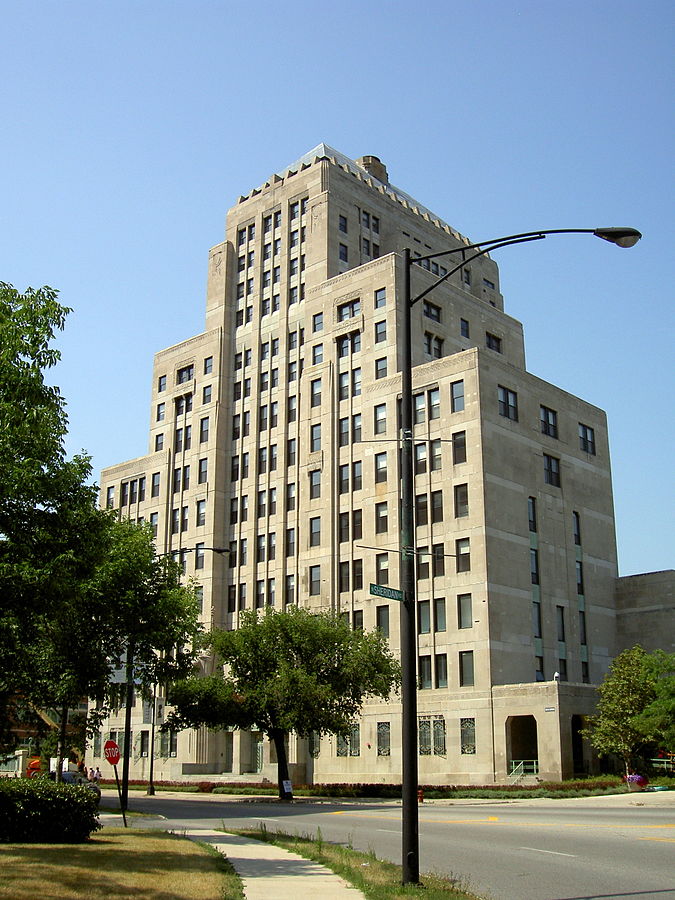 Construction started on the Mundelein College Skyscraper Building a mere three days after the "Crash of '29," which ostensibly marks the start of the Great Depression. The structure was one of the few skyscrapers built within a Chicago neighborhood rather than in the center of the city. Although the college no longer exists as a separate institution, its former building continues to support education and stands as a reminder of the importance of women's colleges in the 20th century.
The fourteen-story skyscraper, located on Chicago's north side is visually distinctive due to its location far removed from the city's downtown region.  The high rise building not only rises high about its nearby neighborhood buildings but its position on the corner of Sheridan Road where it transitions from a north-south route to east-west has allowed it last as a notable, visual landmark for generations.
However, while it is visually striking, its historical legacy is mostly due to its purpose as a college for women. When it opened its doors in 1930 as Mundelein College, a Catholic woman's college created by the Sisters of Charity of the Blessed Virgin Mary at the urging of Chicago's Roman Catholic Archbishop, George Mundelein, it proved to be a resounding example of the profound change in attitudes towards women seeking a college education.
Until the Civil War era, few women enrolled at institutions of higher learning, but the 1862 Morrill Act established co-educational state universities and, a few years later, women-only colleges emerged. It should be noted that the Roman Catholic church also denied women the opportunity for most (if not all) of its history, so the building also points to a marked change in attitudes among Catholics.
Enrollment proliferated throughout its first few decades. During World War II, women were granted leaves of absence to help in the war effort. Meanwhile, those remaining at the college organized blood drives and other projects meant to aid troops. During its first few decades, the college introduced several graduate programs for women. As well,  Mundelein attendees were the first that could formally commit to the study Latina outreach.
By the 1960s, the college served as the nation's largest Roman Catholic women's college, and enrollment remained steady throughout the 1970s and the early 1980s, and by that point men were allowed to attend (Mundelein College amended its articles of incorporation in 1968, although reaching women remained the focus of the college). Reflective of the women's movements that became popular in the U.S. during the 1970s, Loyola formally offered interdisciplinary women's studies programs, and by 1983 the college offered its attendees the chance to minor in Women's Studies.
Enrollment declined dramatically during the 1980s. In 1991, Mundelein administrators felt it prudent to affiliate with nearby Loyola College. In the years that followed, Mundelein became part of Loyola which owns the building. In 2005, a multi-year rehab project on the skyscraper began. The high-rise structure opened in October 2012 as the Mundelein Center for the Fine and Performing Arts.

Looking northwest at Mundelein Center from Sheridan: By Amerique - Own work, CC BY 3.0, https://commons.wikimedia.org/w/index.php?curid=7556024