The Sugar Mill Ruins happens to be in the second oldest city in Florida. The Sugar Mill Ruins is located in New Smyrna Beach, Florida. This sugar mill was part of a 17 acre sugar plantation in the early 1800s, but was raided during a war between the Seminole Indians and the United States. Although it is made of a seashell mortar, the ruins still stands. 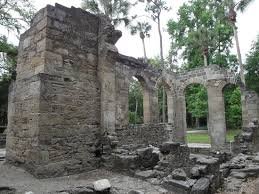 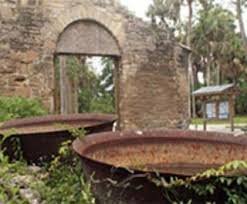 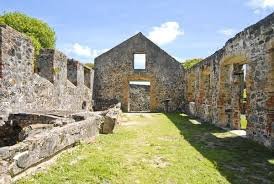 The city was first settled in 2000 BC by the Timucuan Native American tribe until the Indians were wiped out by diseases and war brought on by the European settlers. In 1768, Dr. Turnbull was a Scottish physician and entrepreneur. He decided to call the area Smyrna in honor of his wife that was born in Smyrna, Asia Minor. This colony is located in East Florida and encompasses 101,400 acres. The was at least three times larger than the Jamestown Colony. New Smyrna became one of the largest British colony attempts in the New World.

In 1830, Henry Cruger and William dePeyster bought 600 acres of land to start their plantation.They wanted to establish a large commercial sugar industry in Florida. The original plantation consisted of a sugar and saw mill, both were made of "coquina" which in Spanish means tiny shells. The buildings were made of mollusk shell fragments and quartz, and calcium carbonate held these structures together. The buildings that were erected included a crushing house, sugar cane factory, and a saw mill. Machinery for the mills was stream driven, and they were financed by investors in New York City. Cruger and dePeyster used a machine with a steam power engine to crush the sugar cane. This technique was more efficient than many of the other methods used at the time.The Sugar Mill Ruins contains remnants of a thriving sugar mill, a forty-foot limestone chimney that was part of the crush house, iron gears, and a cane press.

Tension had been growing between the settlers, Seminoles, and the United States government since the government had decided to remove Indians from Florida. Sadly, the mills were burned down by Seminole Indians during the Second Seminole War in December of 1835. During the raid, the plantation slaves aided the Seminole's in the mills' destruction. The raid destroyed crops, their factory equipment, and also barrels of their drying syrup. Cruger and dePeyster moved the equipment that wasn't destroyed, including the crusher to Dunlawton Plantation, but this plantation was also burnt to the ground.The continuing raids pretty much ended the sugar production in Central Florida. You can still see the sugar cane crusher at Dunlawton Sugar Mill Garden