When John S. Hull and his wife arrived in Beckley in the early 1880s, he quickly entered the hotel business with his wife’s brother William Prince, and together they started the Raleigh House. According to the Hinton Herald from January 1873, the newspaper reported that Beckley had two hotels, but did not list their names or the proprietors. While few descriptions of the Raleigh House survived, the centennial issue of the Beckley Post-Herald offers a few details. The newspaper stated: “At the fork of the two turnpikes that wound through the mountains, Beckley was a stopping off point on long journeys and a headquarters for scores of drummers, like the traveling salesman of the era was called.” In further describing the old hotel, the Beckley Post-Herald noted: “Atop a high pole, a long sign bearing the words Raleigh House was the beacon to the weary voyager looking for a haven for the night.”

Raleigh House, circa 1880s. John S. Hull is in the center of the photograph. 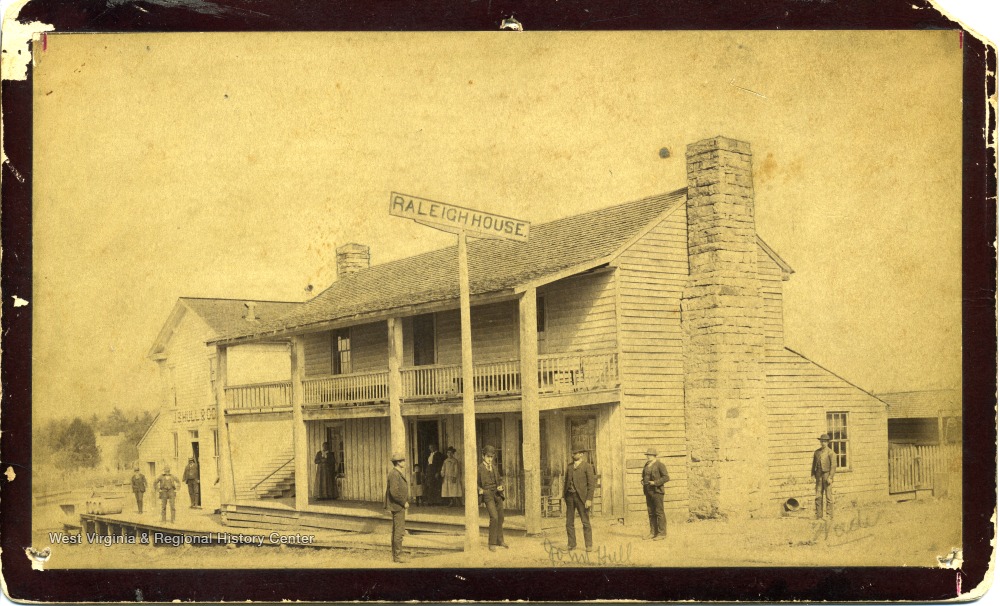 A view of early Beckley, with the Raleigh House in the background. 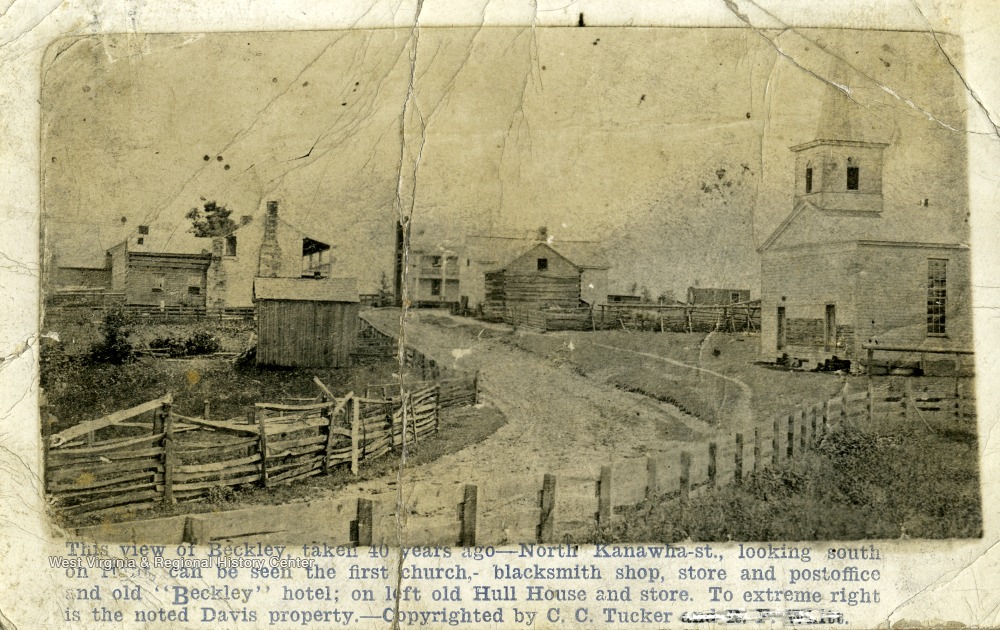 Noted business leaders in Beckley during the 1890s. John S. Hull pictured in center of the photograph. 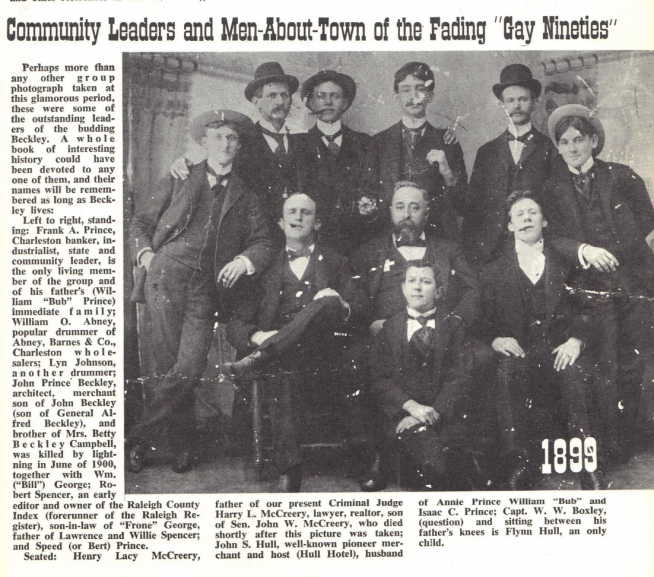 As demonstrated by historian A.K. Sandoval-Strauz, the importance of hotels to the growth of communities in the late 19th century cannot be overstated. The Raleigh House connected the small town of Beckley to the larger world by offering traveling salesman en route to their destinations, a place that in some ways resembled home.

An important component to small town nineteenth-century Americans centered on ways to attract people to their communities. Sandoval-Strauz describes how hotels factored into attracting people to a community: “the rise of the hotel also connoted something went beyond its basic function and indicated a change in the way people understood their world: the hotel made hospitality into an important model for other human relationships and institutions. When a city or town opened a hotel, it was demonstrating its willingness to welcome outsiders.” Descriptions of John S. Hull are also hard to come by, but the Beckley Post-Herald reprinted his obituary from when he passed away in 1899 and noted that he had a kind disposition: “Kind, courteous and obliging, he made friends of all with whom he came in contact. Witty and cheerful, and thoughtful to the comforts and pleasures of others, rendered him popular with all his friends and associates.” Certainly, Hull displayed the right kind of character, along with his business acumen to make a career in the hospitality industry successful. The Beckley Post-Herald also described the Raleigh House as a “sedate, well-managed place with eight rooms, a chimney, and a plank board porch.” Although, George R. Bullen from Baltimore, one of the men who helped build the Raleigh courthouse in 1890, remembers some different facets of Beckley, the Raleigh House, and John S. Hull.

In 1933, George R. Bullen revisited the city of Beckley, which he had not been there since he left in December 1890 after the construction of the courthouse was finished. The Beckley Post-Herald noted that when Bullen left Beckley in 1890, “he left behind him a mere village, no hard streets, no railroad, city water supply or any modern conveniences. He returned at the age of 66 to find a modern city of 10,000 people, with all the landmarks he had known vanished save for the courthouse he helped build.” Throughout the interview with Bullen, he described the architects who designed the courthouse, recalled visiting with General Alfred Beckley’s widow, and fondly remembered John S. Hull. When Bullen arrived in Beckley in the spring of 1890, he went to John S. Hull to get a room at the Raleigh House. Shortly after that, Bullen went home to Baltimore and got married, and returned to Beckley with his wife and they planned on staying in the room Bullen had paid for at the Raleigh House.

Bullen recalled that “John Hull told me his place was hardly suitable for a man to bring his bride (this was the day before the Hull Hotel) so he arranged to get us taken care of at the home of his brother, Henry Hull, a block and a half down the street.” While Hull’s statement to Bullen does not necessarily indicate a heavy criminal atmosphere in Beckley, it does denote some aspect of the people staying at the Raleigh House, and very well could have referred to other construction workers staying in Beckley at the time of the courthouse’s construction. Sandoval-Strauz explains that small communities had to reconcile how they viewed strangers with suspicion, especially as hotels offered the chance for strangers to reside in a community temporarily and in the case of George Bullen and the construction workers, they helped modernize Beckley and Hull’s hotel helped the process of modernization.

By 1893, John S. Hull had opened up the Hull Hotel, a more modern, and larger hotel diagonally across the street from the Raleigh House. It is not exactly known what happened to the Raleigh House after the Hull Hotel opened in 1893, although it is probable that it went out of business shortly afterward. Though the Raleigh House is long gone, John S. Hull left an impression on a small community whose hotels helped jumpstart the hospitality industry in Beckley during the late nineteenth and early twentieth centuries, and further opened up Beckley to the larger world.