Rock Run Mine and Furnace

The Rock Run mine and furnace was a iron producing facility that was mainly used during the Civil War and for a short time afterwards. The furnace was destroyed by Union soldiers after the war and rebuilt in 1874. It was bought by the Bass family and expanded until the early 1900s when blast furnaces fizzled out. Today the furnace has been dismantled but many of the nearby homes still stand in well-kept states.

The historic marker telling about the furnace. 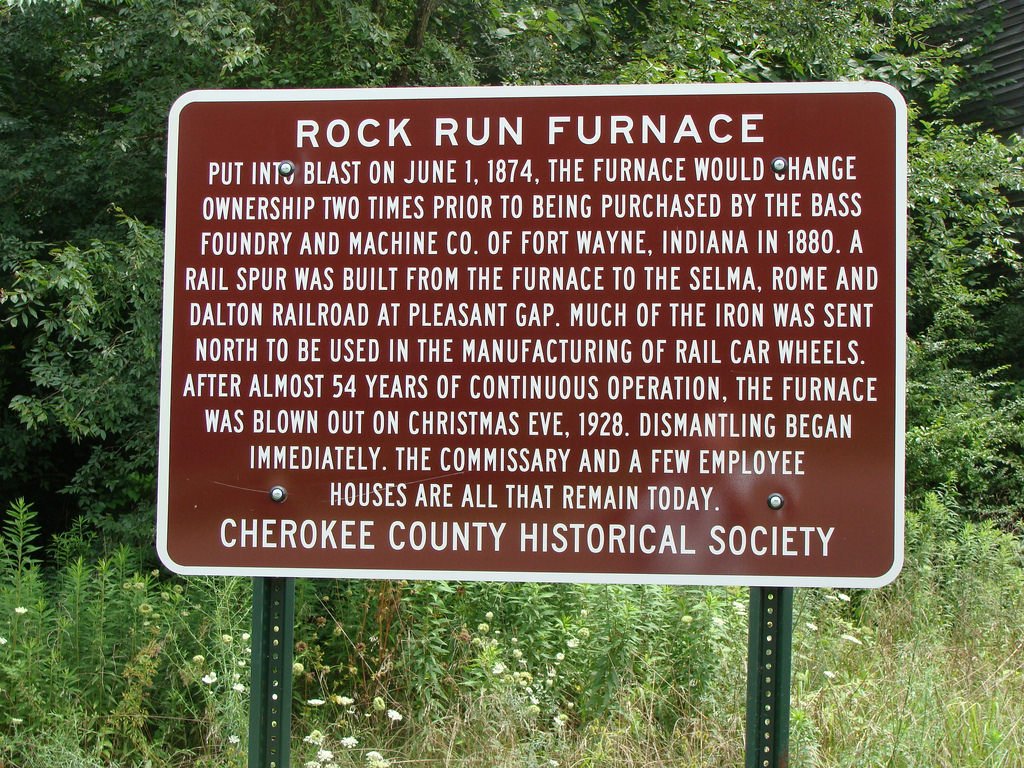 A picture of the furnace when it was in operation. 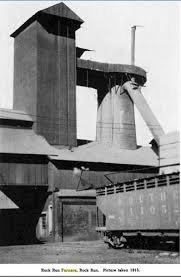 The Rock Run mine and furnace was used originally during the Civil War and Alabama iron boom to help produce iron for the Confederate army. The furnace could produce 14 tons of iron per day. The origin date for the mine and furnace are unknown, but in 1862 or 1863 the original furnace was destroyed by Union troops and was left abandoned. In 1873, new construction was started by Theodore and Alfred Royer of Johnstown, Pennsylvania. The new furnace was a single stack blast furnace measuring 38 ft across and included an iron shell and elevator to take raw iron to the top. The furnace also was equipped with cast iron pipes to preheat the air. The furnace went into operation on June 4, 1874 and received its ore originally from the hill behind the mine and later received ore from nearby areas.

A blast furnace works by heating iron oxides, or ore, and melting them into molten iron; this process chemically reduces the metal and separates the oxides from the iron. Typically at the time, iron ore, coke, and limestone would be dumped into the top of the furnace and the air would be preheated by gas from a separate combustion chamber. The coke would eventually start to burn and would be hot enough to melt the iron. Once the ore melted, the limestone would reduce impurities in the ore and produce slag which is less dense then iron and would float on top and be removed. The iron ore would be brought out and formed into any shape needed which would commonly be ingots.

After the iron boom the furnace company struggled, and the furnace changed owners many times in the 1870s, and eventually ended up in the hands of John H. Bass of Ft. Wayne, Indiana who bought the facility for $30,000 on January 9th, 1880. Bass owned and operated fifteen other furnaces to feed his railroad car wheel manufacturing plants in Chicago, Fort Wayne, and St. Louis. He enlarged the efforts in Rock Run and made the plant more efficient and the town boomed from this. The furnace would be expanded several times and more charcoal boilers were added. The output capacity went from, 5,000 gross tons to over 15,000 gross tons annually. At the furnace’s peak, there were around 400 to 500 workers at the plant who lived in Rock Run and surrounding areas. The company provided housing, a school, church, and commissary for residents to buy what they needed.

In the early 1900s, blast furnaces in Alabama began to decline, and by 1940 only 19 furnaces were still in operation. After the furnaces were blown out and companies dissolved, many workers were able to buy their houses but many of the communities dissolved, including Rock Run. Today, Rock Run is inhabited by a small handful of people who still live in the original housing and keep them in good repair. The commissary has fallen into serious disrepair and the furnace was dismantled.

Ricketts, John A.. How it works: The Blast Furnace. The Potteries. . Accessed December 05, 2018. http://www.thepotteries.org/shelton/blast_furnace.htm.