The Korean War Veterans Memorial, situated just off of the Reflecting Pool on the National Mall, honors those who served in the Korean War. The memorial was commissioned by the U.S. Congress on October 28, 1986 and the design and construction of the monument was jointly managed by the Korean War Veterans Memorial Advisory Board and the American Battle Monuments Commission. The final design selected for the monument was created by Washington architectural firm Cooper-Lecky, following a bitter dispute that involved a government-sponsored design contest and four students from The Pennsylvania State University (see NY Times article below). The groundbreaking ceremony was held on June 14, 1992 and the memorial was dedicated on the 42nd anniversary of the end of the conflict-- July 27, 1995. The memorial is managed by the National Mall and Memorial Parks division of the National Park Service.

This is an image of the 19 stainless steel statutes sculpted by Frank Gaylord that are a part of the Korean War Veterans Memorial. These statues represent 14 Army soldiers, 3 Marines, 1 member of the Navy, and 1 member of the Air Force. 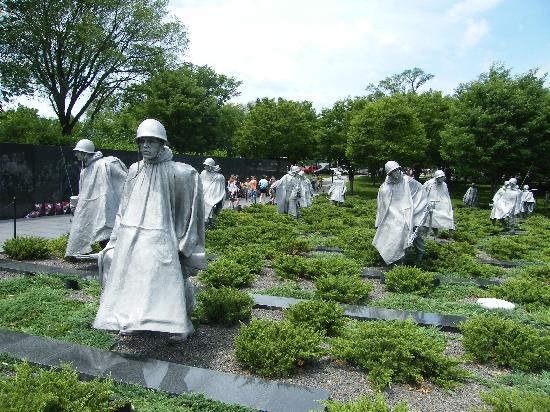 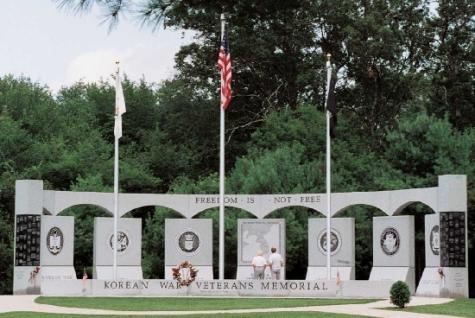 "A Canadian officer salutes after placing a wreath at the Korean War Veterans Memorial in Washington. Representatives of the 22 UN allies who fought in the Korean War participated in the ceremony." (Photo by Rudi Williams) 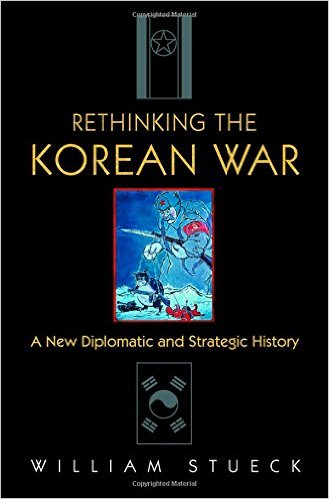 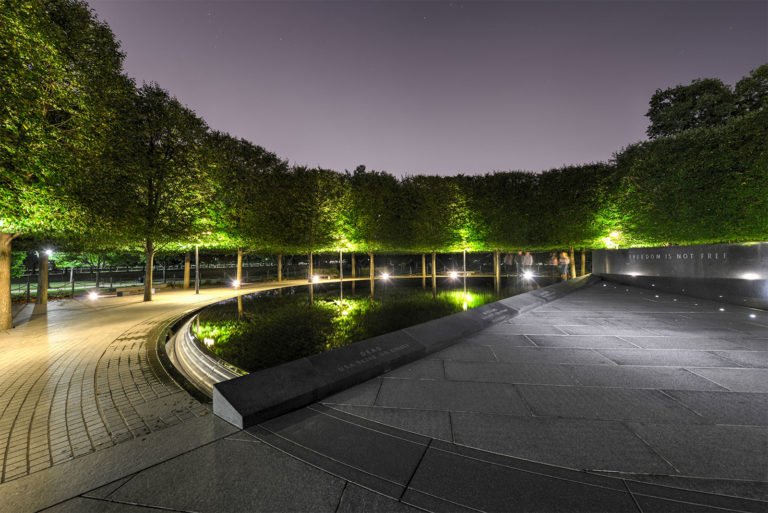 View of soldier statues in the reflection pool to represent the 38th Parallel and thirty-eight months of war. 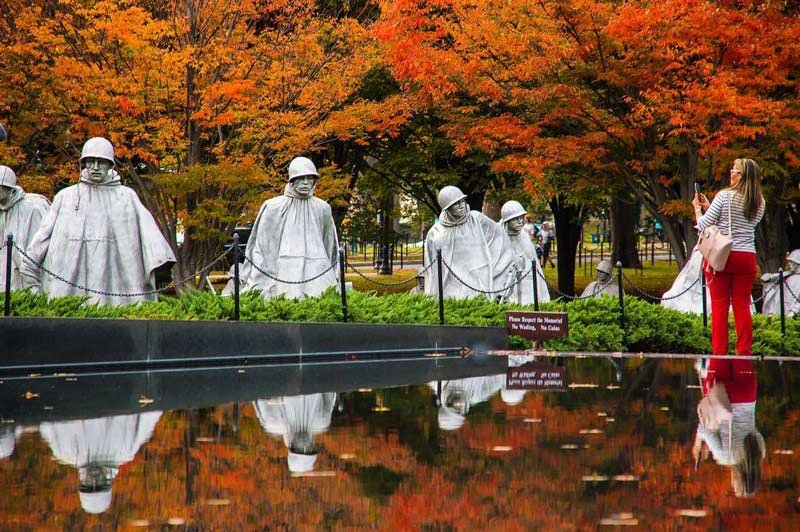 The Korean War began in 1950 when a Soviet backed North Korea invaded South Korea. Five years earlier, Soviet Premier Stalin and American President Truman agreed to the division of Korea at the 38th parallel. The USSR was to occupy the industrial north while the United States occupied the agricultural south. From split until war, the United States became preoccupied with rebuilding Western Europe and did not list Korea under the American defense perimeter in Asia. Eager to reunite North and South Korea, the newly appointed Prime Minister of North Korea, Kim Il Sung, asked for Stalin’s blessing to invade his southern neighbor while American attention was elsewhere. On June 25, 1950, North Korean forces invaded South Korea. In response, the United Nations Security Council passed a resolution calling member states to aide South Korea and send military assistance. The bulk of the fighting force was American, and the famous General Douglas MacArthur became Commander-in-Chief of the United Nations Command.

The War was fought in five distinct phases, each more trying than the last. The first phase was defensive and led to UN forces being driven back to Seoul, the capital of South Korea. It was not until the second phase that the UN forces went on the offensive under Operation CHROMITE. This military operation involved reinforcing the cornered forces and cutting off supply lines to the North. Upon completion of Operation CHROMITE, MacArthur famously claimed that American troops would be, “home by Christmas.” It seemed that the conflict would end quickly and the establishment of a non-communist government in a unified Korea. Unfortunately, the fighting was just beginning as Chinese forces entered the fray. Upon arrival, the Chinese turned the tide back in favor of the North Koreans and forced the longest retreat in American military history.

The Chinese entrance into the Korean War changed the political scope of the engagement. The goal of the war became unclear and ultimately resulted in General MacArthur being excused from his commanding role. MacArthur sought to invade China and believed that without significant increases in troop numbers, the original aim to unify Korea was unachievable. This war’s connection to the Cold War began to show how difficult it would be to achieve even limited objectives against communism. With the Soviet Union, China, and the United States involved in the Korean War, the stage was set for future conflicts to become ideological rather than for land. As the UN forces mounted a counteroffensive against the Chinese advance, improvements in either sides territorial gain became limited. Negotiations for a cease fire continued throughout the last phase of war. Eventually, North and South Korea agreed to cease hostilities but did not sign a formal treaty. As a result of the Korean War, over 37,000 Americans lost their lives. The numbers lost by the native armies were much more staggering. More than 250,000 South Koreans perished and nearly 1.3 million are thought to have lost their lives on the North Korean and Chinese side of fighting. To this day, the United States maintains a strong presence in South Korea along the Demilitarized Zone (DMZ).

The Korean War Veterans Memorial was built to honor the memories of those soldiers.

The memorial was commissioned by the U.S. Congress on October 28, 1986 and the design and construction of the monument was jointly managed by the Korean War Veterans Memorial Advisory Board and the American Battle Monuments Commission. The memorial was finished being built in 1995 and its dedication occurred on July 27th of that year.

As the number 38 has significance of the conflict, it is also important within the memorial. The Korean War Veterans Memorial contains nineteen statues of soldiers. When viewed in the reflecting pool, these soldiers become thirty-eight. This is representative of the 38th parallel and the thirty-eight months that the Korean War raged. On top of its beauty, the Korean War Veterans Memorial serves as a reminder of the importance of America’s influence in Asia and its fight against communism during the twentieth century.

Last updated by Matthew Hoffman (Instructed by David J. Trowbridge, Marshall University) on May 2nd 2020, 2:25:10 am.