The Dar Al-Hijrah mosque was established in 2006 by Somalian-American Muslims, the majority of whom migrated to Minnesota and live in the Riverside Plaza neighborhood. In 1998, the building became the home of the building Riverside Islamic Center. Prior to 1998, the building had been home to a steam laundry and a knitting factory. The building officially became a mosque when the Muslim community bought the building in 2006 and gave it its current name which "Home of Migration." Today, the building hosts prayer spaces for men and women, classes, office spaces, and a community center. After a fire in 2014, the building’s interior was restored and a new entrance was situated on Cedar Avenue.

Protestors against Islamophobia in Minneapolis, September 17, 2016 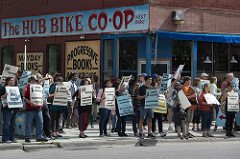 The mosque still has a sizable congregation, though nearly 30 mosques have grown around it since its creation. It remains a prominent community feature in the Riverside Plaza neighborhood.

Muslims from Somalia are one of the largest immigrant groups to arrive in Minneapolis in the last century. With violent conflict in Somalia in the early part of the decade, a significant wave of displaced Somali relocated to the Minneapolis-St. Paul area. As the Minneapolis Somali population grew, it became imperative that there be a space specifically for this community. In recent years, the population has expanded beyond the Riverview neighborhood, and there are more resources for the Somali community that have opened in the past decade.

Created by Pip (Instructed by Catherine Smith, University of Wisconsin-Madison) on December 7th 2018, 2:43:20 am.