The Hamburg Massacre, previously known as the "Hamburg Riot," consisted of an attack by around one hundred white men upon a small company twenty-five to thirty Black militiamen in July 1876. White Hamburg residents formed a mob and attacked the Black men, killing two before continuing their attack in the days that followed. In total, six Black men were killed and many more were wounded. This monument was created by white residents to commemorate the one white attacker who also perished. The conflict began when white residents of Augusta demanded that the Black militia of North Augusta be disarmed and disbanded. After retreating into a stone warehouse, that also acted as an armory, a short battle began and quickly ended with two Black men being killed during or after their attempt to surrender. One white man, Thomas Meriwether, was killed with six of the militia men being killed later-on and several others wounded. This monument was erected to commemorate Meriwether and more recently, a marker has been created to commemorate all seven of the men who died that day.

The Meriwether Monument at Calhoun Park (photo by Lindsey Hodges) 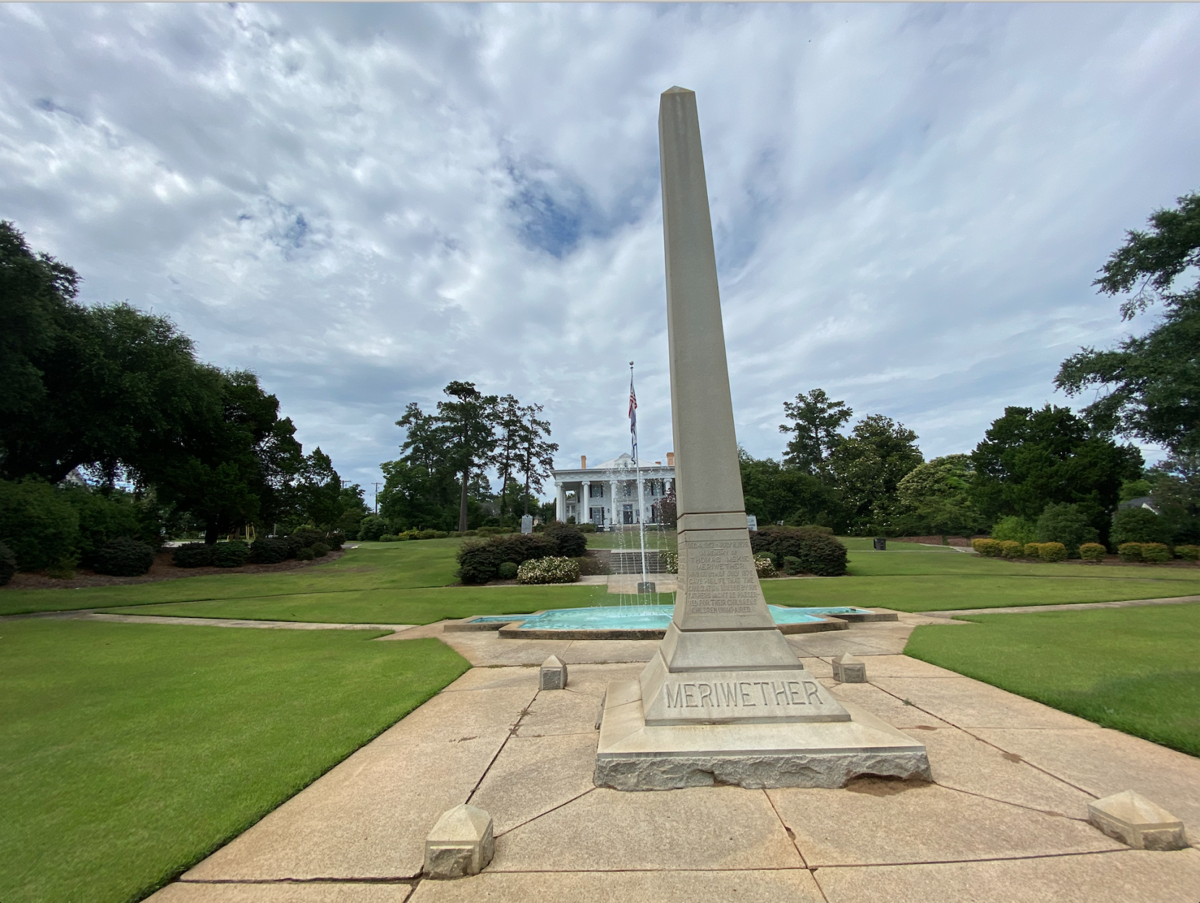 The front of the monument reads: "Who on 8th July 1876, gave his life that the civilization builded by his fathers might be preserved for their childrens children unimpaired." (Photo by Lindsey Hodges) 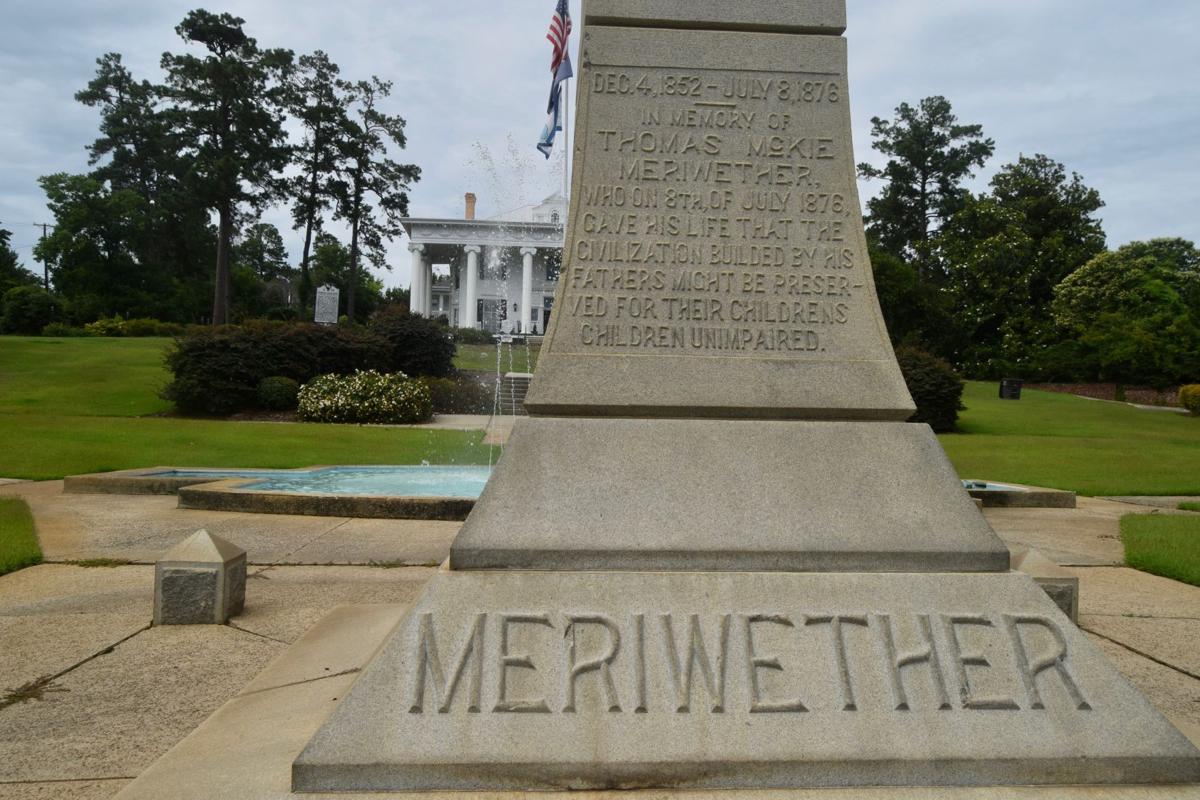 The Meriwether Monument at Calhoun Park (photo by Lindsey Hodges) 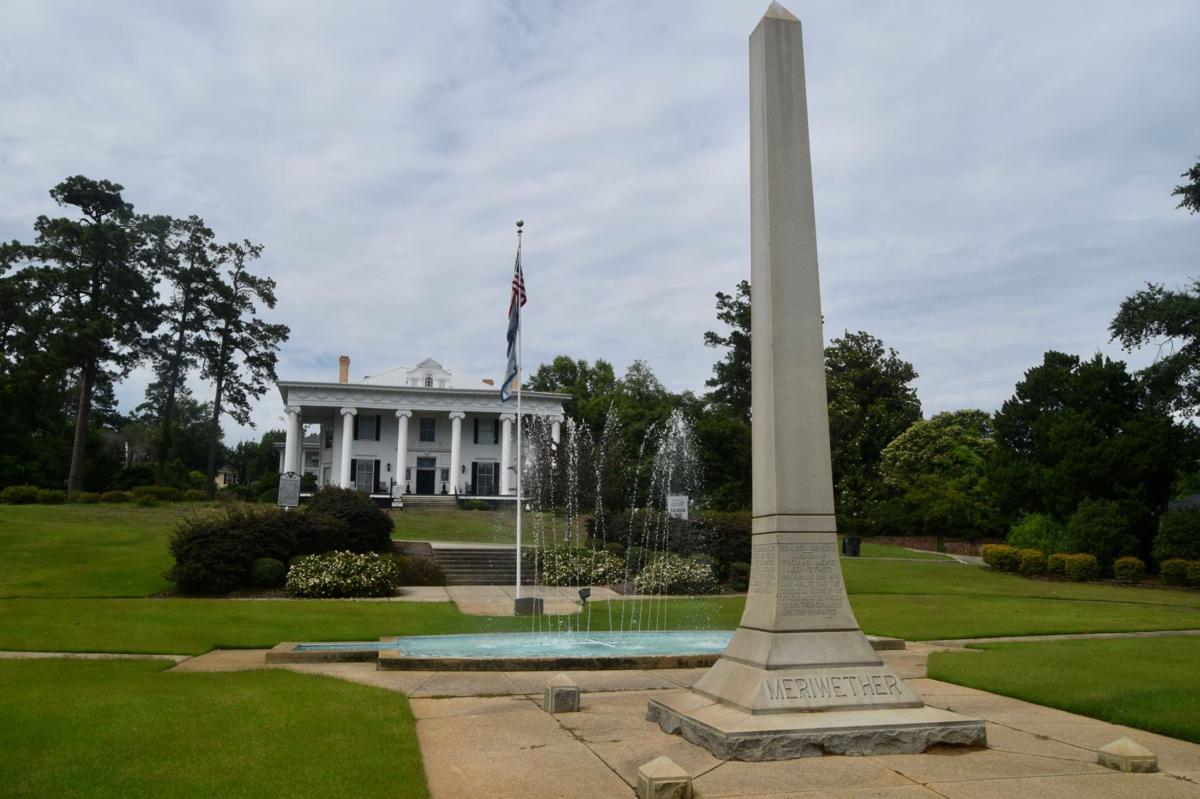 This marker interprets the event as a "massacre" and offers context. It is not on public display here owing to fears of vandalism by those who prefer the memorization of Meriwether 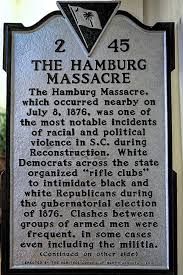 This monument was erected in 1916 by the state of South Carolina, under an act of the South Carolina general assembly, to the memory of Thomas McKie Meriwether. Meriwether was the only white casualty of the Hamburg Massacre (previously known as the Hamburg Riot) where a force of white residents attacked a unit of African American militia, killing seven.

First Panel: Who on 8th July 1876, gave his life that the civilization builded by his fathers might be preserved for their childrens children unimpaired.

Second Panel: In youths glad morning the unfinished years of manhood stretching before him, with clear knowledge and courageous willingness, he accepted death and found forever the grateful remembrance of all who know high and generous service in the maintaining of those civic and social institutions which the men and women of his race had struggled through the centuries to establish in South Carolina. What more can a man do than to lay down his life.

Third Panel: In life he exemplified the highest ideal of Anglo-Saxon civilization. By his death he assured to the children of his beloved land the supremacy of that ideal. “As his flame of life was quenched, it lit the blaze of victory”

Fourth Panel: This memorial is erected to the young hero of the Hamburg Riot, by the state, under an act of the general assembly, with the aid of admiring friends.

The Hamburg Massacre of 1876

After the Civil War the town of Hamburg was primarily a community of African American residents and the community organized a company of state militia. The unit was Company A, Ninth Regiment National Guard of the State of South Carolina and the men were armed by the state in their role as an organized militia. On July 4, 1876, to commemorate Independence Day, the company drilled under Captain Doc McAdams on one of the streets of Hamburg. Thomas Butler and Henry Getzen, two white farmers on their way through town, were outraged to find that the road was temporarily obstructed by the group of Black militia and a heated argument ensued. Captain McAdams finally ordered his men to part ranks to allow for the two men to travel through.

The next day Thomas Butler brought the matter up in court and charged the militia of obstruction of a public road, requesting a warrant against Doc McAdams. More to the point, he and other white residents and demanded that the militia be disbanded. While Augusta was primarily white and had several informal militias and rifle clubs, North Augusta was primarily Black and the existence of a militia consisting of Black Union veterans upset many white Augusta residents.

By July 8th hundreds of white men, many belonging to various rifle clubs, descended on the small town of Hamburg. Backed into a stone warehouse, the Sibley building, that also acted as an armory, 25 militia men along with 15 residents barricaded themselves in. When the force of white men outside the building started to fire, the militia within the building returned shots. During this firefight Thomas McKie Meriwether was killed by a shot to the head. Later the rifle club members brought out a cannon and reinforcements from Georgia and waited for the militia to run low on ammunition. Many of the African American men tried to escape from the armory building at this point. During his escape, the first Black militia member was killed; this was James Cook who was hit by 5-6 bullets as he tried to escape out the back of the building.

The force of white men took approximately 25 African American men prisoner as they tried to escape from the Sibley building. These militia men were placed within a ring of armed white men and several were picked out and killed. Allen T. Attaway, David Phillips, Albert Myniart, Moses Parks, and Hampton Stephens were shot to death after being picked out of the ring. Corporal Nelder John Parker was wounded by a shot to the back and died the next day. Three other men picked from the “ring” were shot but survived: Butler Edwards, Willis Davis, and Pompey Curry. After killing the five men the club members then descended on the small town wrecking it. After the massacre seven men were brought to trial for murder but all seven were acquitted.

This event was used by Wade Hampton, a former Confederate general, as a way to elevate himself and the democratic party as well as a way to warn the white residents of South Carolina of the alleged dangers of biracial and Republican rule. This also prompted white South Carolinian residents to adopt Mississippi’s Shotgun Policy, a means in which white Democrats would use force to intimidate, run off, beat, or even kill Republicans and Black residents in order to ensure white rule under the all-white Democratic Party of South Carolina. In the end Hampton did win the election and proceeded as mayor of South Carolina. The Democratic party used this strategy in many other states and eventually gained most southern sates back as democratic states resulting in the ultimate end of the end of Reconstruction in 1877.

The Meriwether Monument only commemorates the death of one casualty of July 8-9, 1876 and has recently come under scrutiny for its language and meaning.

In 2016 a historical marker and new Hampton Massacre monument were unveiled on Barton Road, near the First Providence Baptist Church. This monument lists the names of all 8 men killed during the violence, including Meriwether.

In 2019 the City Council appointed a committee to determine the best options for addressing the Meriwether monument and the interpretation of the Hamburg Massacre in Calhoun Park and the local community. The Council decided to add additional interpretation at the Meriwether Monument and possibly add a second sculpture to the park to balance the story. The full committee report is linked below.