Learn about "the most dangerous woman in America," and why she chose this location for her final resting place. For a fuller version of this tour, go to the website link below. Mary Harris Jones (1837-1930) was an Irish immigrant who endured great loss and tragedies. But through organizing in the labor and socialist movement, she became a beloved folk heroine, a figure of legend and lore. After 1899, she devoted most of her organizing to the United Mine Workers of America. When a Congressman asked her address, she replied, "My home is where the workers are fighting injustice." She had no home for 25 years, and instead traveled across the country, wherever there was a struggle. Jones chose Union Miners Cemetery as her final resting place because miners in this area had in 1899 decided to commemorate the role of the ordinary worker in changing history.

Overview: This map is also available at http://www.motherjonesmuseum.org/wp-content/uploads/2018/12/UnionMinerCemetery-12-10_Page_1.jpg, designed by Kate Klimut. A fuller tour will also be available there by January 2019 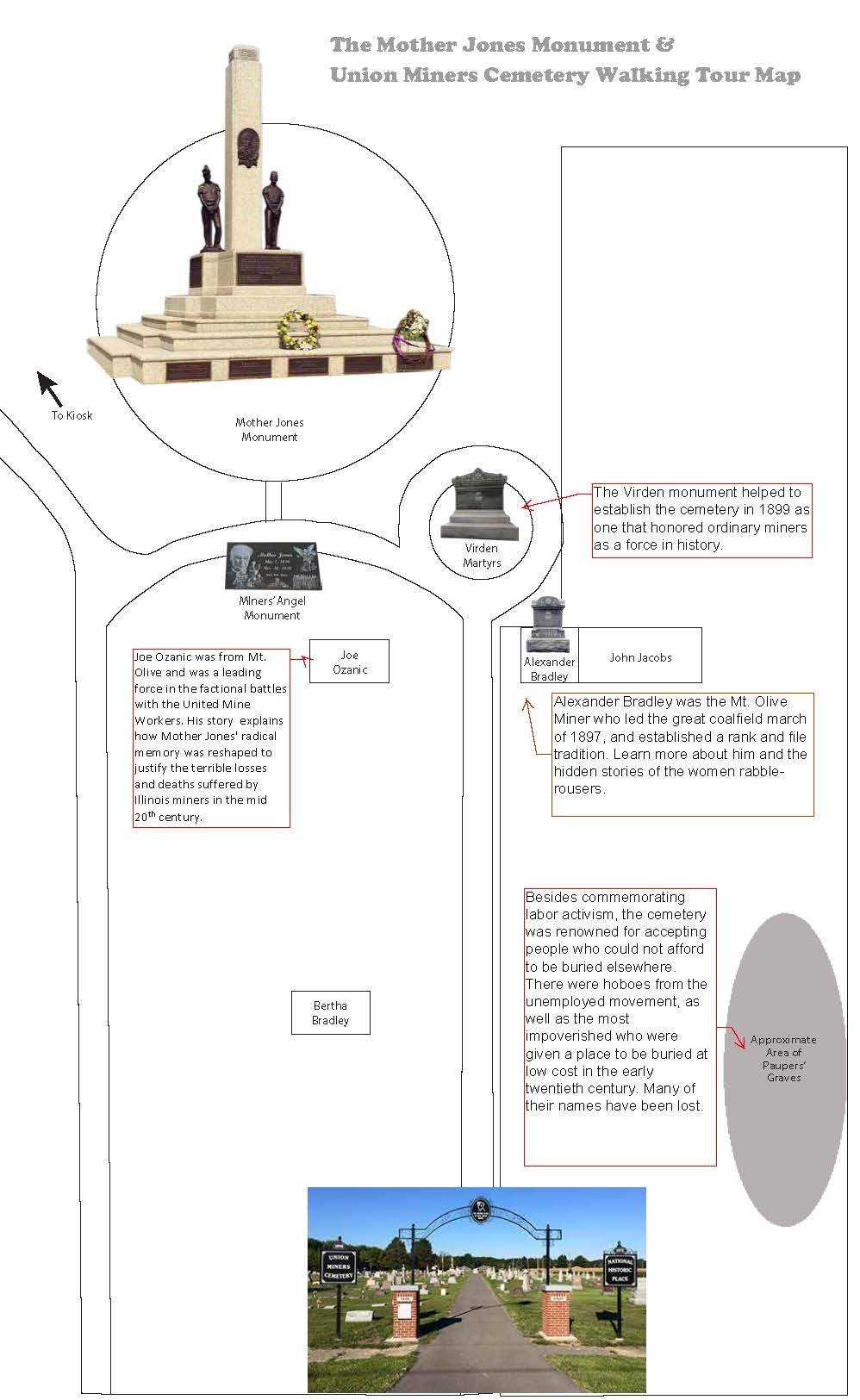 Overview: Imagine 50,000 people attending the unveiling of the Mother Jones Monument, and you come close to understanding what a powerful moment this was for mining families. 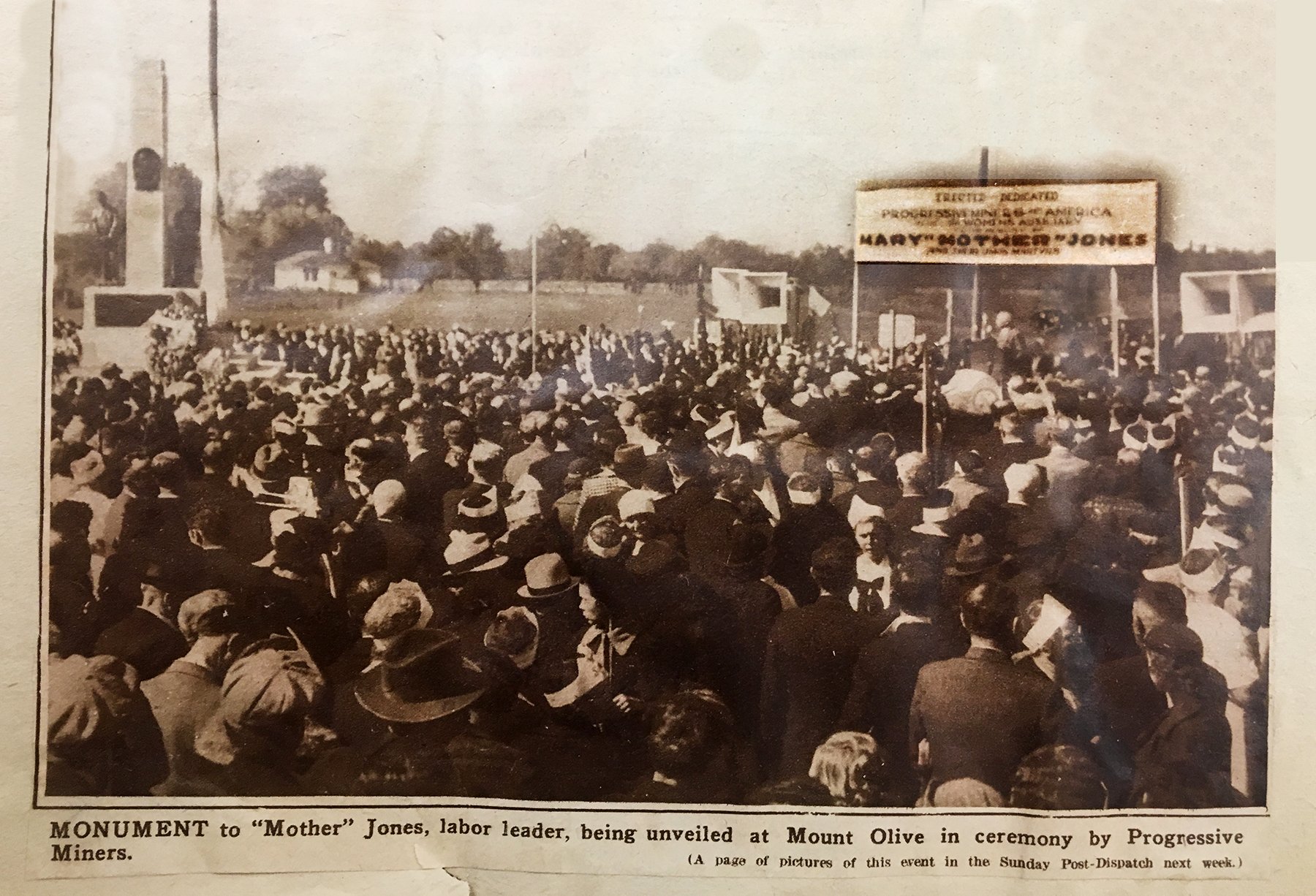 Monument dedication: Another image of the crowd anticipating the unveiling of the Mother Jones Monument October 1936. 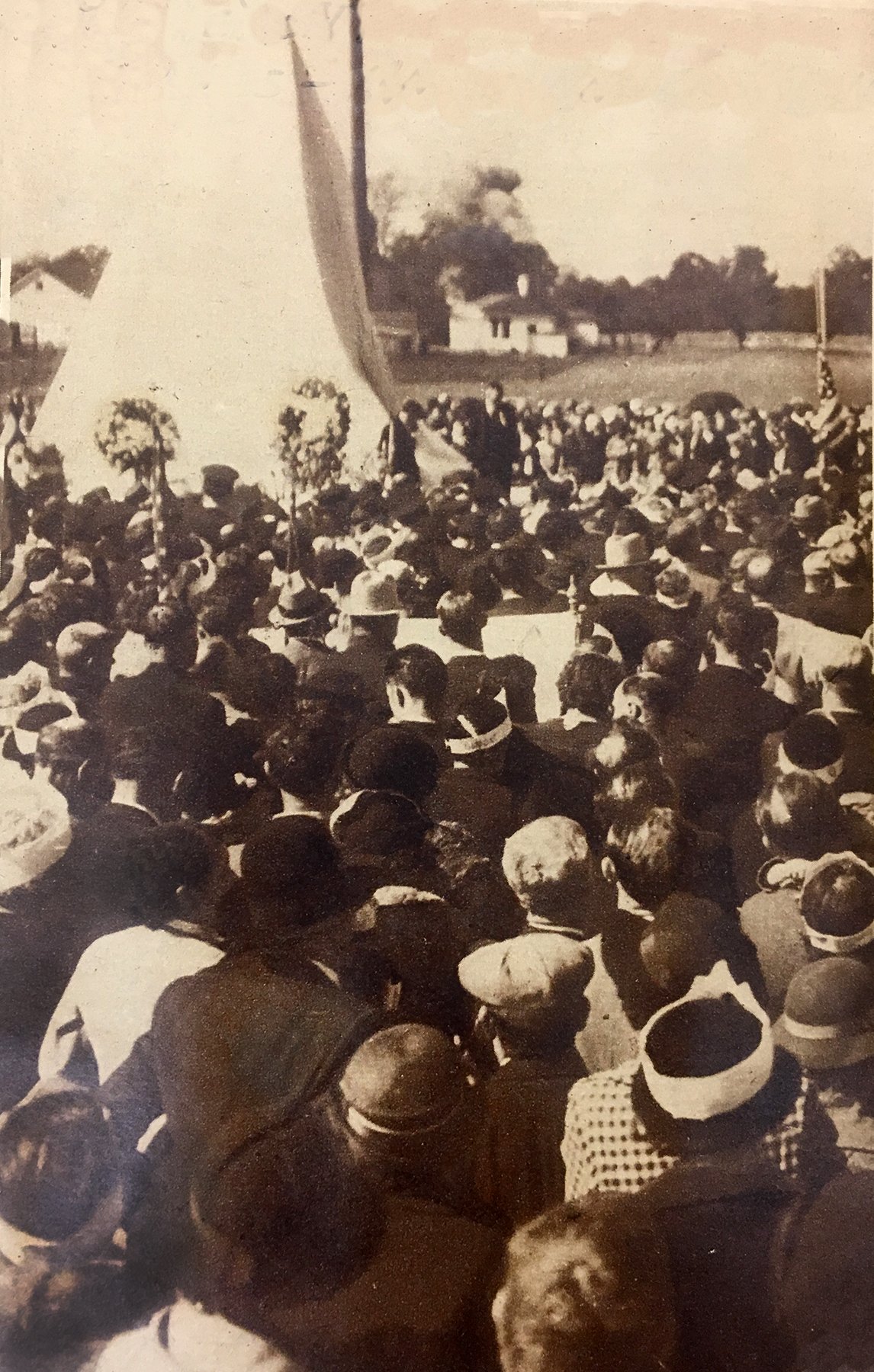 This image is looking west from Alexander Bradley's grave. At the right in the background you will see the Virden monument. The cross is where Jones was originally buried at her request. 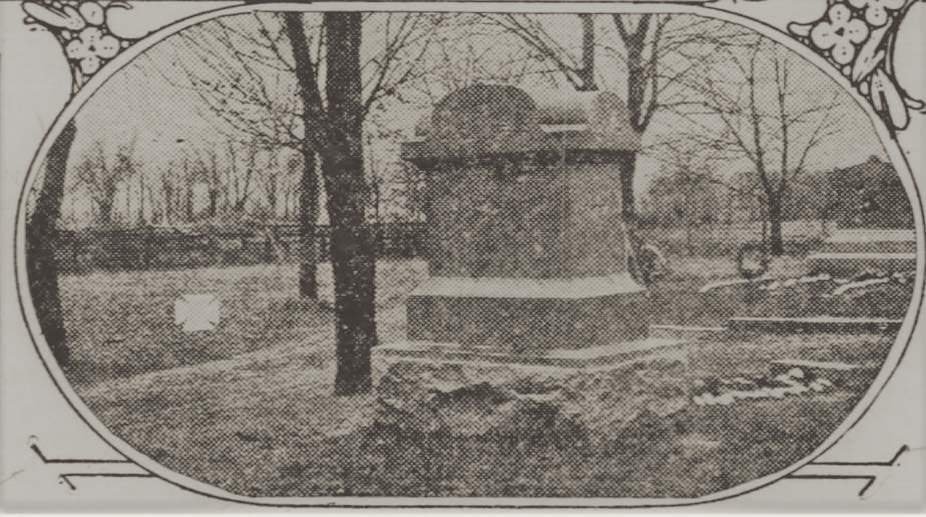 Alexander Bradley.was the Mt. Olive Miner who led the 1897 miners march to shut down the mines, a strike that brought about the 8 hour day. It was a catalyst for shutting down all the coal mines in the state. Bradley had entered the mines as 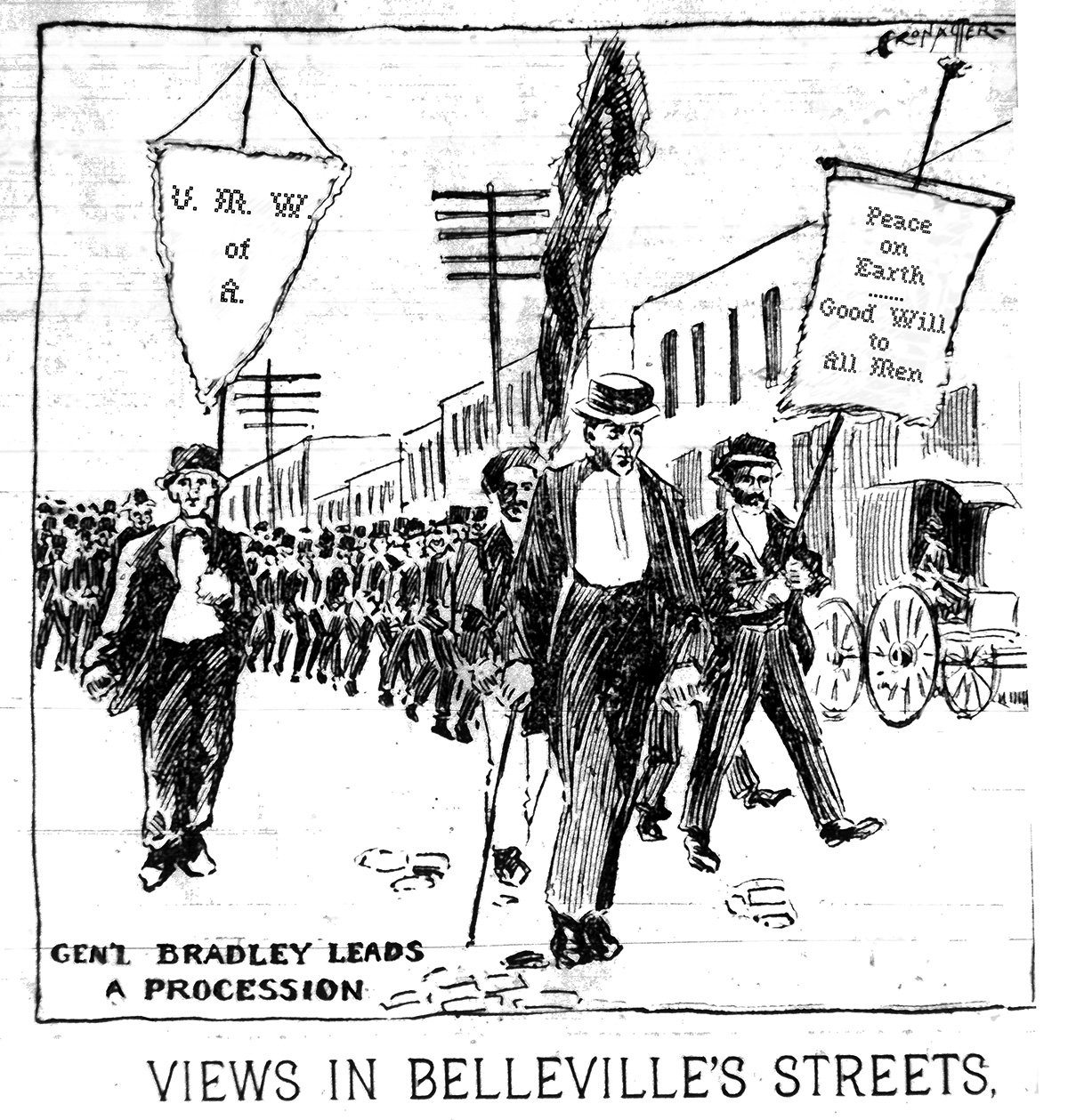 Alexander Bradley's mother was a militant activist as well. Yet her story has been forgotten, as has most of the women who fought in the coal fields. The story connects to the establishment of the Union Miners Cemetery. 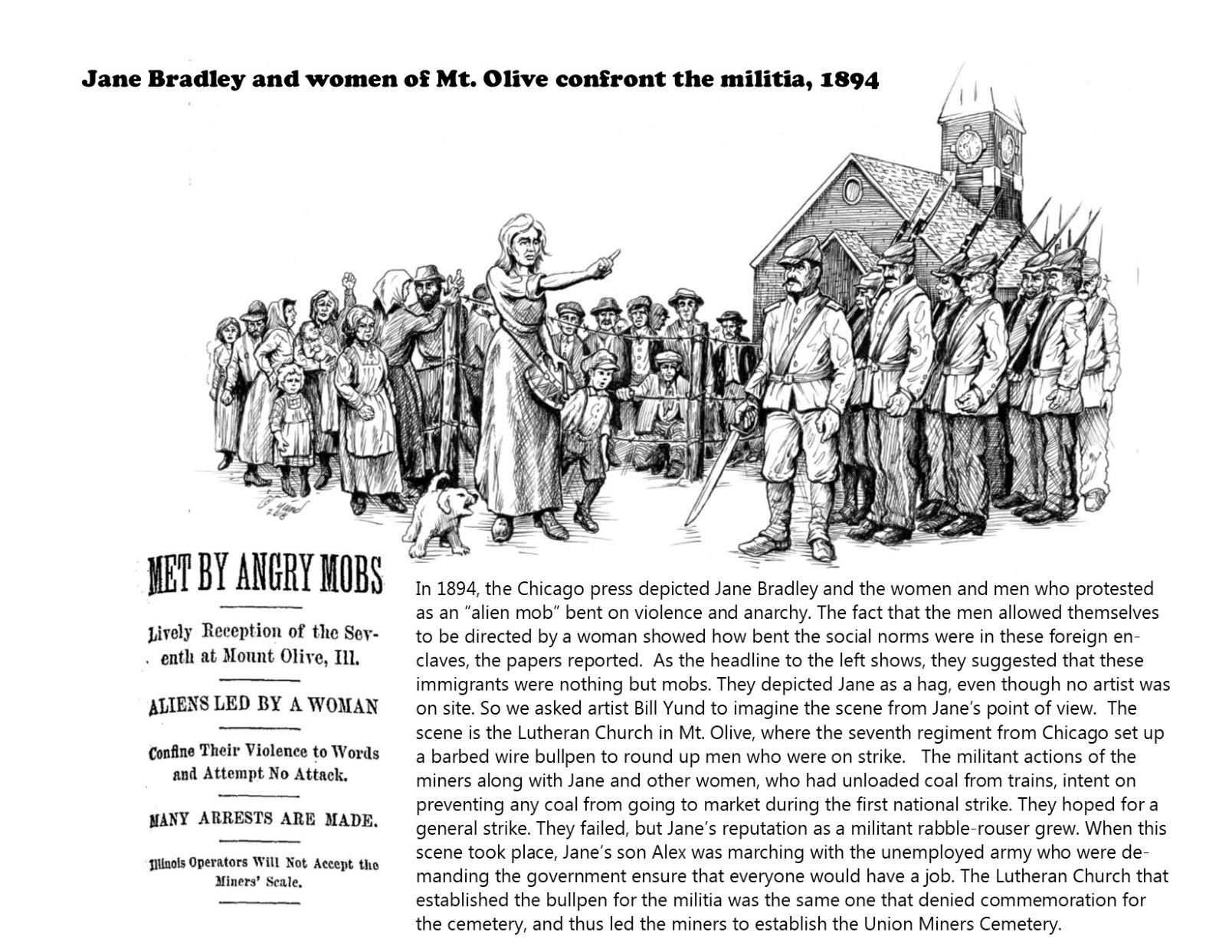 Bradley, 1897, after the great strike. He loved this image of himself as the dapper young man of substance. It suggested that miners who dug the coal that fueled the nation deserved the finer things in life. 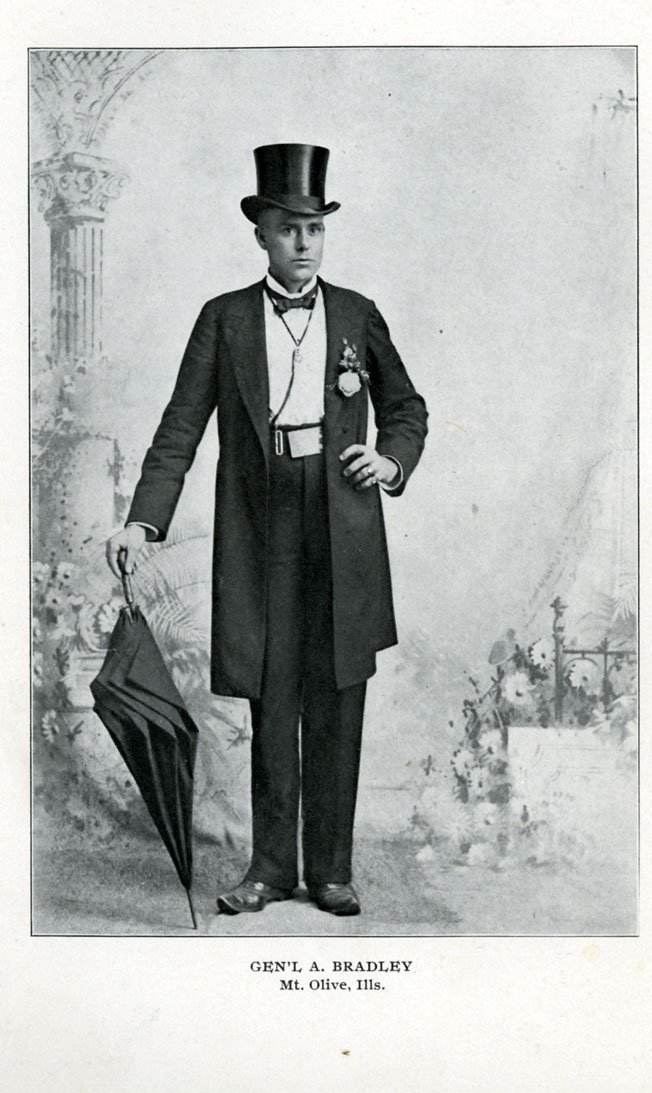 This telegram was sent by Alexander Bradley from Virden in the midst of the battle in 1898. 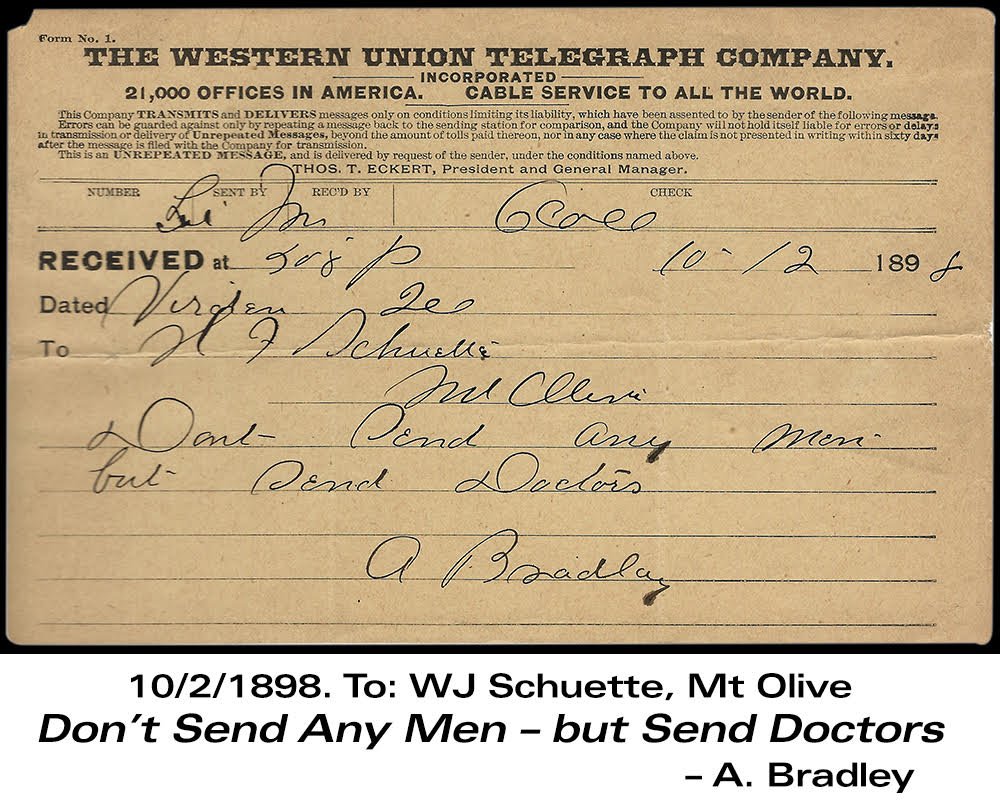 Mother Jones asked to be buried next to the Virden martyrs who had sacrificed their lives for the union cause. Honoring the martyrs started the tradition of celebrating the role of the rank-and-file worker in changing history. 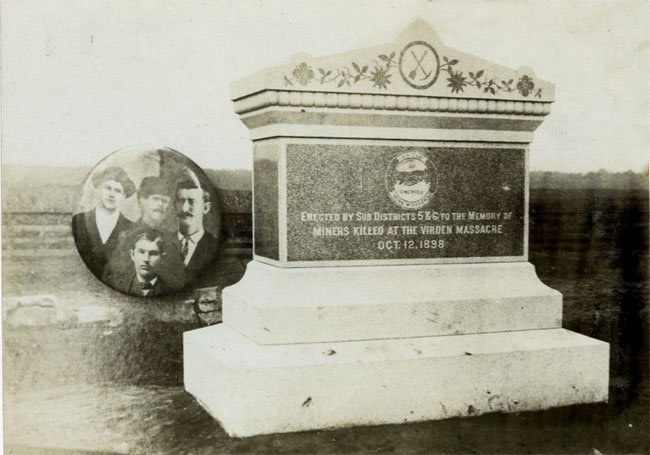 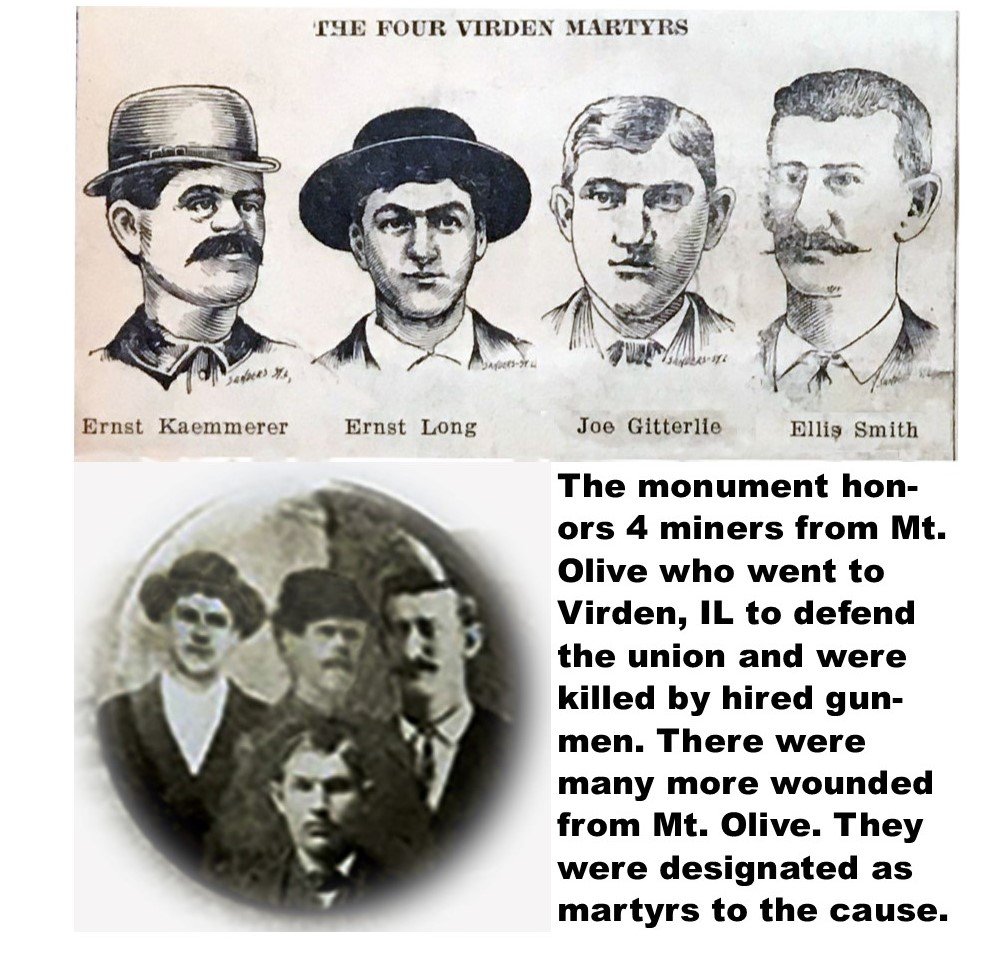 The October 12, 1898 headline of a Chicago paper. As it turned out, 13 died; 8 of them were miners, and the rest were guards. This was a battle against paid company mercenaries and unionists. Mt. Olive volunteers played a central role 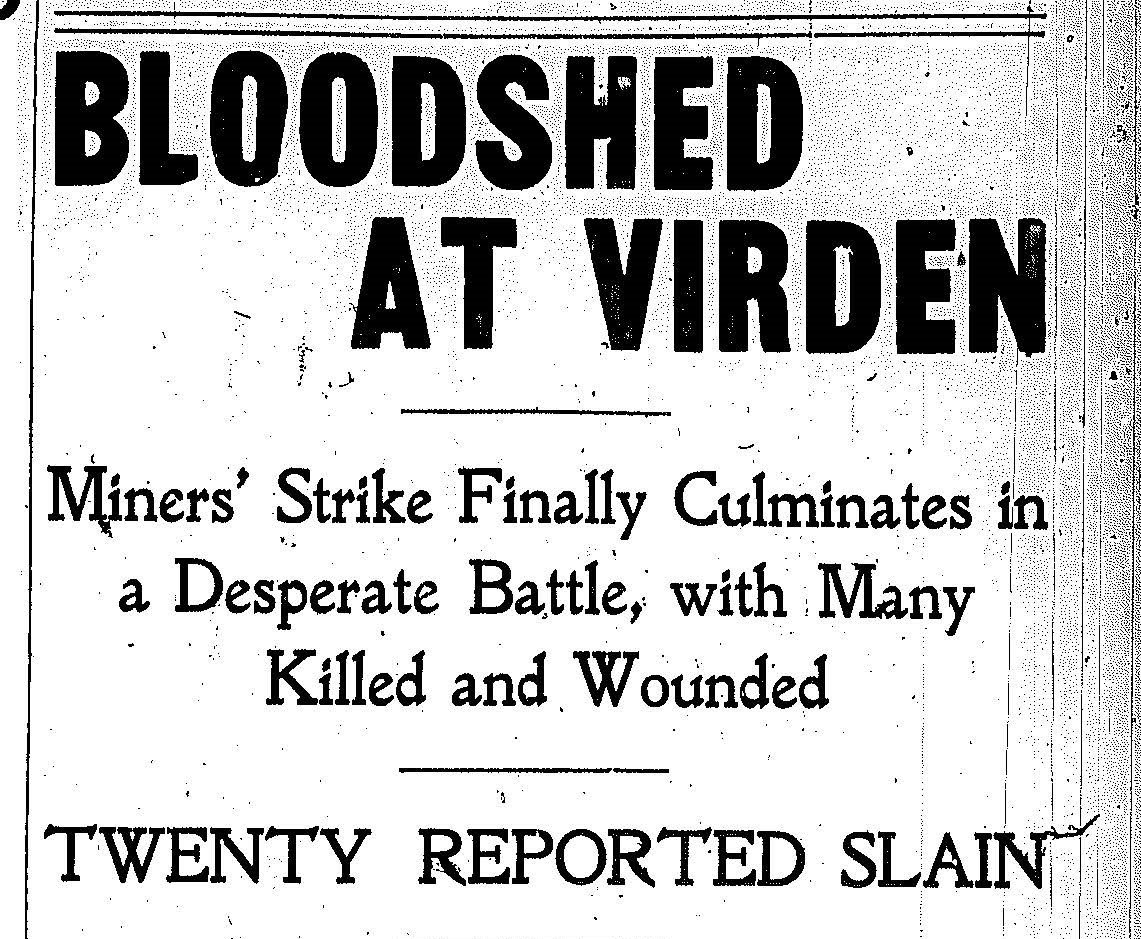 The determination of the Mt. Olive local to lionize and commemorate the miners who had given their lives for the union was a first in U.S. history, in that it emphasized the ordinary miner and rank-and-file role in changing the course of history. 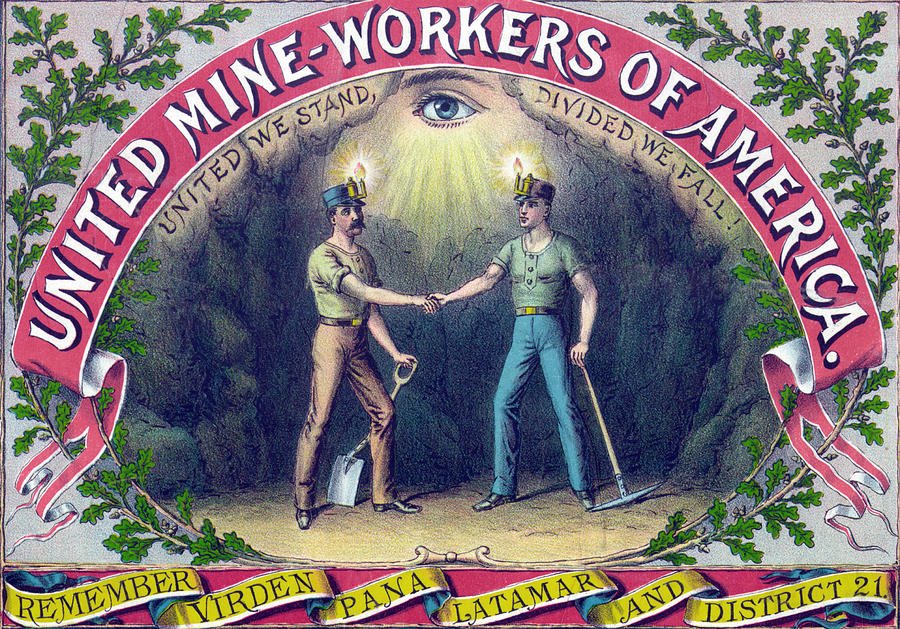 Jack Battuello, pictured in a sit-down in the Wilsonville mine in 1937, tells of the meaning of the Virden martyrs. 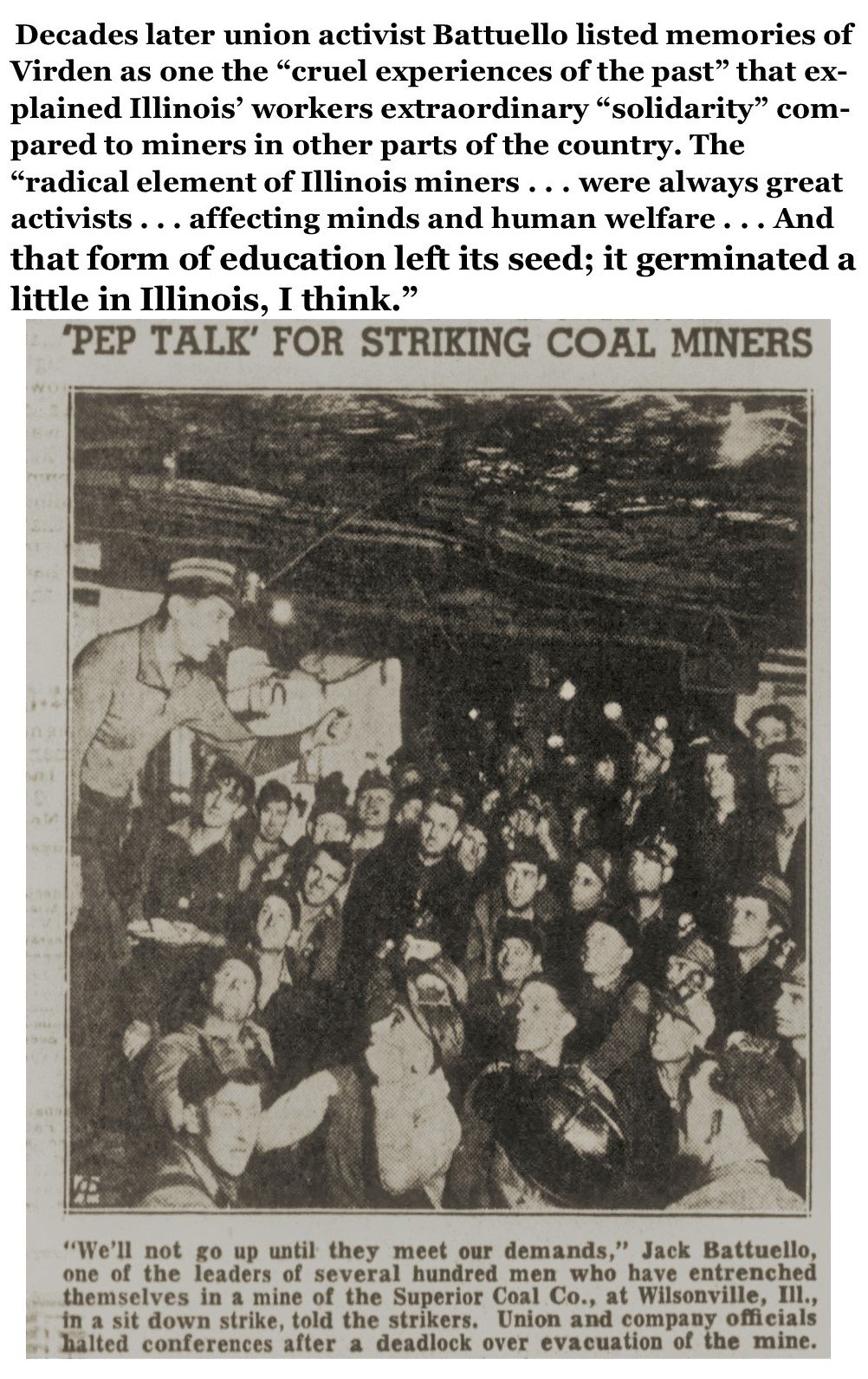 Originally the top area of the monument was conceived as a speakers' platform, for thousands of people. But the decline of mining and the loss of PMA to the UMWA led to the monument's decline as a base for universal uprising or memory formation. 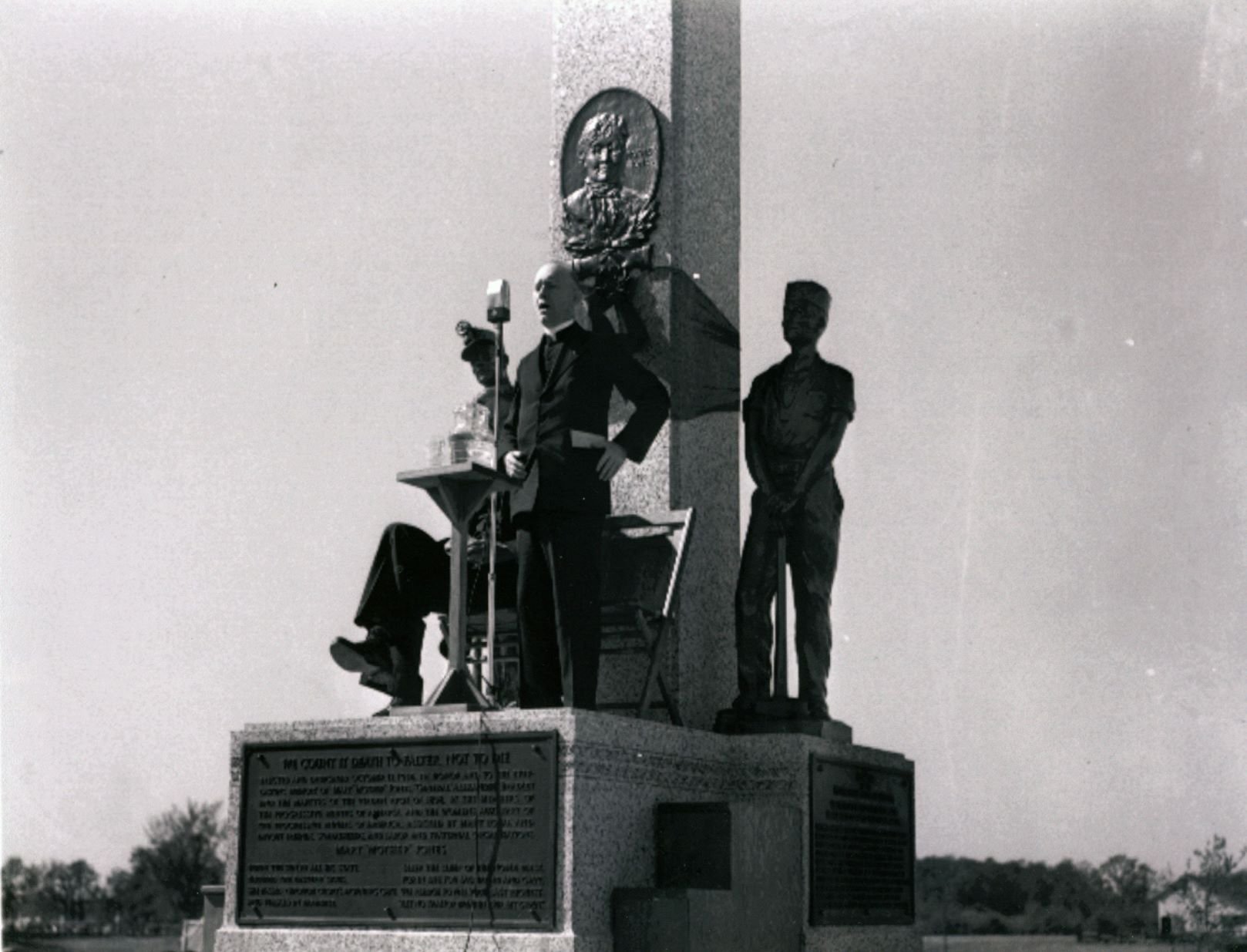 more detail on the PMA martyrs listed above, who were killed during the 1930s mine war. By the time that the monument was built in 1936, it was a tribute to the factional warfare and "clean unionism." 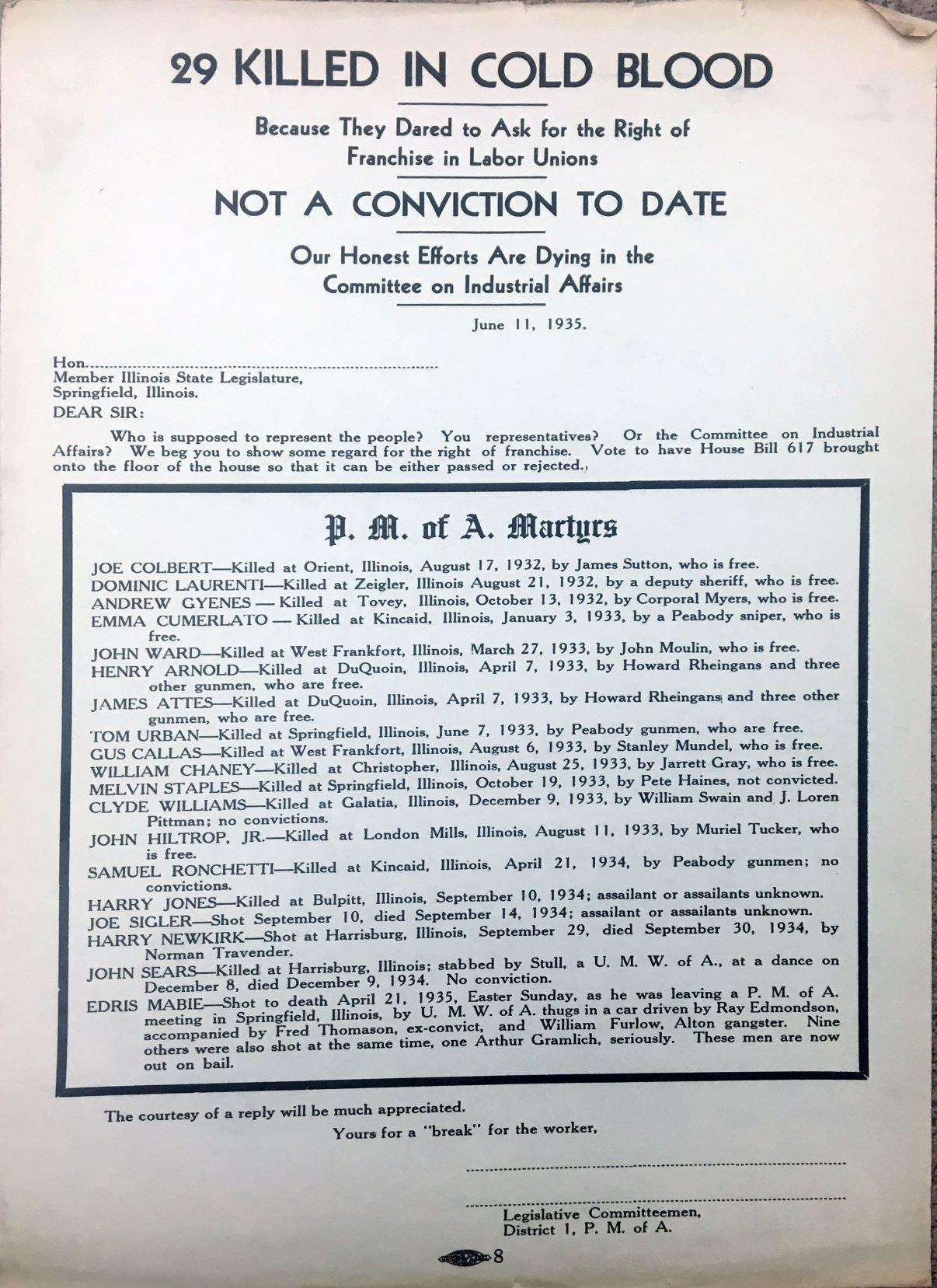 See website linked below for Union Miners Cemetery map guide.
Mary Harris Jones (1837-1930) was an Irish immigrant who endured terrible tragedies, but through organizing in the labor and socialist movement, became a beloved folk heroine.

Mother Jones was a legend in her own time--a tiny steel-blue-eyed woman who conjured courage in working-class people to take on the corporate “pirates.” There was truth to this legend. Jones faced down bayonets, stared fearlessly into the eyes of the coal operators’ hired guns, and defied troops sent to subdue the immigrant working class. She became a legend by organizing entire communities. She inspired people to fight, to resist, to refuse.

In 1901, when young textile children in New Jersey launched a strike, they expected Mother Jones to appear over the hills: “They say that strikers always win when they have Mother Jones to help them,” they vouched. In looking for Mother Jones, they found the power of collective action, the legend in themselves. The legend only deepened when Jones fearlessly took on the challenge of organizing West Virginia. She became known as The Most Dangerous Woman in America.

Jones chose Union Miners Cemetery as her final resting place because of the symbolism associated with it. This small town and activists like General Bradley (see his gravesite here) had helped to create a rebellion against terrible conditions in the mining industry of the Midwest of the 1890s. When four Mt. Olive miners died in a battle with hired guards in the Virden mine war of 1898, the miners union here sought to honor them with a historical marker. (see Virden Martyrs monument) Local prominent men refused permission for this kind of commemoration a year later. So in 1899 the union purchased their own land and started this cemetery, the only union-owned cemetery in the U.S.
The commemorations built the idea that history is changed from the bottom up, and that the unsung miner could be the authors of their own lives. Mother Jones was organizing on that basis. Soon the miners had achieved October 12, the day the martyrs died, as a union holiday. In this area of the country, miners, not Christopher Columbus, were celebrated as heroes. The Mt. Olive local built the monument to ensure this lesson was passed on. And that memory of their role deeply affected the perspectives of miners.
The commemoration were pushed by Mt. Olive socialists such as Adolph Germer. He and other socialists brought figures like Emma Goldman, widow of a Haymarket martyr, and socialists like Eugene V. Debs and Mother Jones, to speak at the monument. They were among the dozens of prominent figures who spoke at this site in the early twentieth century.
Mother Jones embraced the concept that ordinary workers and their families could move history forward. When a Congressman asked her address, she replied, "My home is where the workers are fighting injustice." She had no home of her own for 25 years, and instead traveled across the country, wherever there was a labor struggle. She believed that labor would only be strong if it broke down ethnic and racial barriers.
While she asked to be buried with "her boys" in Mt. Olive, Jones believed that women needed to organize and march for justice. When she fought against child labor, it was by calling on children to organize and march against injustice themselves. Jones thought that the people who were considered the lowliest could be the authors of their own destiny. In doing this, she helped to create the concept of rank-and-file unionism, and sought to connect the socialist project with labor unions.
Mother Jones fame at the time of her death in 1930 ensured that wherever she was buried would have a spotlight on it. She wanted to highlight the struggles for worker control of their union and industry by being buried here. Workers in this area had a strong positive sentiments toward socialism, which Mother Jones embraced. "I long to see the day when labor will have the destination of the nation in her own hands, and she will stand a united force, and show the world what the workers can do."
In 1936 miners and women mining activists raised funds to erect an 80 ton monument to her, now the Mother Jones Monument. By then, the miners were embroiled in a great factional dispute with John L. Lewis and mine operators. The twenty one people listed on Mother Jones' monument died in that mine war. Because of that,  Jones' grave and monument became a focal point in the debate over democratic unionism. This led to limiting her memory in the mid-20th century. Lewis and the UMWA carefully left her out of their history, and the Progressives sought to use her mainly as an icon to "clean unionism."
During the 1960s and 1970s, radical unionists and students revived Jones memory, and there were attempts to revive this as a place of remembrance. There were many obstacles. Many people in the area balked at the idea of radical celebrations, but more especially of any UMWA members commemorating her. John Keiser and the Illinois Labor HIstory Society led the effort to get the cemetery designated as a National Historic Place. Then some groups from the Springfield labor movement and leftists began to revive the October 12 commemorations starting in the 1980s. Every October people come to the area to remember.

This entry is written of Rosemary Feurer, Northern Illinois University, and funded by a grant from Illinois Humanities. The sketch of Jane Bradley was developed through research by Feurer and executed by artist Bill Yund. The map was designed by Kate Klimut.  Please contact motherjoneslives@gmail.com for a list of citations for all of this material. Please feel free to use this material only with credit to these people and institutions.

open at all times

This entry has been edited 44 times.