George Berkowitz opened the first Legal Sea Foods opened in Cambridge in 1904. Berkowitz was inspired by his father's grocery store, called Legal Cash Market. Legal Cash Market was opened in 1904 and sat in the building adjacent to what would become Legal Sea Foods. At its launch, Legal Sea Foods was a fish market. In 1968, Berkowitz turned the market into a seafood restaurant, bearing the same name. Today, the chain operates 38 restaurants across six states and Washington DC, serving 7 million customers annually. Throughout the restaurant's lifespan, it has strived to bring customers the freshest fish on the market, bearing the tagline “If it’s not fresh, it’s not legal!” since their beginning. The original location of Legal Sea Foods burned down on January 18, 1980, but the brand survives in restaurants throughout the US.

Roger Berkowitz, son of George Berkowitz and grandson of Harry Berkowitz, in the original Legal Sea Foods in Inman Square 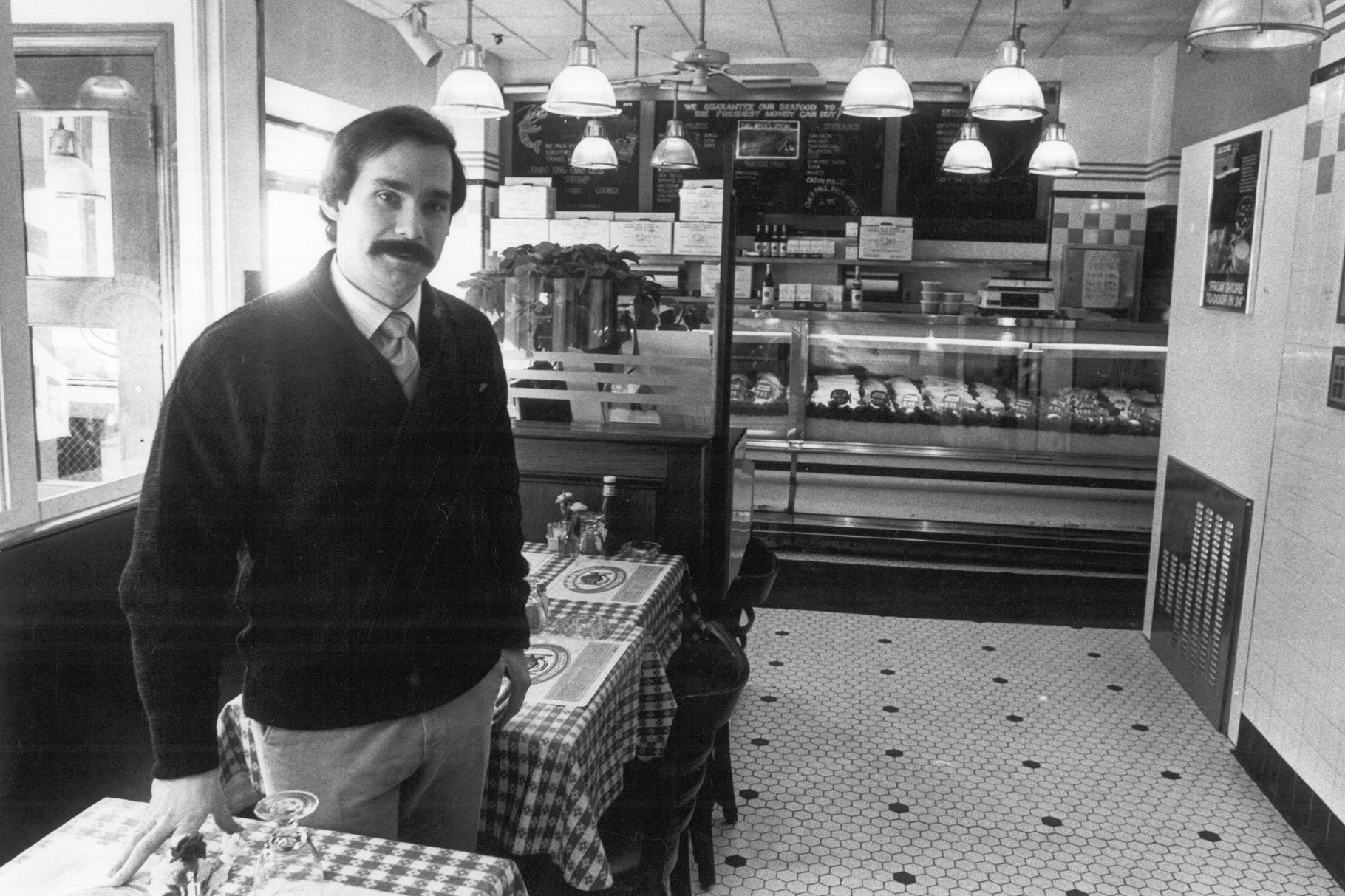 Harry Berkowitz, the father of Legal Sea Foods’ founder George Berkowitz, opened "Legal Cash Market" in Inman Square, Cambridge in 1904. Customers of Legal Cash Market were given "Legal Stamps," a predecessor to S&H Green Stamps, with each purchase from the market. In 1950, Harry's son George Berkowitz opened a fish market adjacent to his father's store, named it Legal Sea Foods, seeking to bring the freshest fish to the city of Cambridge and the greater Boston area.

Legal Sea Foods in Inman Square was a restaurant beloved by its community. Legal Sea Foods was regarded as "the type of place to show out-of-towners the 'real Cambridge.'" The most notable part of the establishment was its culture. The bottom floor was a fish market full of fresh fish in glass cases and live lobster in tanks. The market's floor was covered in sawdust and usually full of customers waiting to buy the best seafood in town. Upstairs, diners sat at picnic tables and read menus that were pasted onto the walls. Each meal, either boiled or fried fish, was served on paper plates and diners would frequently ask their neighbors if they could try a bite of their food, even if they did not know each other.

When Legal Sea Foods burned down in 1980, the company was in the middle of expanding. New restaurants in Boston's Park Plaza and in Chestnut Hill were about to open, and Legal Sea Foods would be about to rebrand. The new restaurants were nicer, more "traditional" restaurants, with higher prices, more variety, targeting wealthier crowd. The new restaurants would have weekly menus, and by 1987 prices were up to $10-$20+ entrees, or approximately $21-43 in 2018. As time went on, Legal Sea Foods would become an American institution. Famed Boston chef Julia Child frequented the restaurant and fish markets while living in the area. Child eventually became such a regular to the stores that she wrote a thank-you letter to then-owner Roger Berkowitz the day before she died in 2004 following a birthday dinner Berkowitz sent to Child's home courtesy of the restaurant. Legal Sea Foods was also  Massachusetts' offering at Presidential Inaugurations from 1981 to 2013, serving their famous clam chowder at each Inauguration since just one year after the fire tore down their original building.

Today, 237 Hampshire Street in Inman Square is occupied by Rosie’s Bakery, with seemingly no mention of what stood there before.8 While George Berkowitz’s son, (and current Legal Sea Foods owner) Roger Berkowitz, said at the time of the 1980 fire that they would consider rebuilding “if we can sit down with the insurance people and get some kind of agreement. It’s really a part of our family heritage. We would like to get back to Cambridge. If it’s feasible, we will”,2 they never did rebuild in their original location. The Charles Square location in Cambridge, which is close to Inman Square notes inspiration from the original location, but a saw-dust covered fish market with picnic tables and menus pasted to the wall has not existed since the 1980 fire.8

2 Rivas, Maggie. "Legal Sea Foods had no Frills, But They Loved It." The Boston Globe(Boston)January 17, 1980. , Daily ed, Metro/ Region sec, 21-21. This source, an article from the Boston Globe archives, details the fire at the original Legal Sea Foods restaurant. Published just ahead of Legal Sea Foods' opening of two new restaurants, it details what will happen to the plans for those stores, as well as what's ahead for the Inman Square location. The source also details what the restaurant looked like, and the culture it had.

6 DeCanio, Lisa. Legal Sea Foods’ Presidential Clam Chowder & 8 Other Presidents Day Facts About the Hub. BostINNO. Feb. 20, 2012. Nov. 5, 2018. https://www.americaninno.com/boston/legal-sea-foods-presidential-clam-chowder-8-other-presidents-day-facts-about-the-hub/. This article, published on President's Day, lists facts about the presidency-- including that Legal Sea Foods has provided clam chowder at every Presidential Inauguration from 1981 to 2012.
7 Legal Sea Foods. Cambridge Historical Society. Nov. 5, 2018. https://cambridgehistory.org/culinary/legalseafoods.html. This picture and description from the Cambridge Historical Society shows the original location of Legal Sea Foods and Legal Cash Market. A brief history is given, along with a description of what is in its place today.