This bronze statue of Senator Charles M Sumner was erected in 1902 and was designed by Anne Whitney. One of the more well known politicians of the pre-Civil War era in US history, he is particularly known for his contributions to the struggle for the abolition of slavery. The design for the statue was initially rejected in 1876 once it became known that a woman designed it, but was financed by friends of Whitney in 1902.

Artist's rendition of the cane beating of Charles Sumner 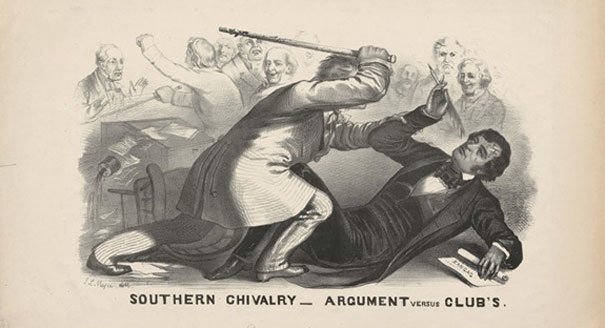 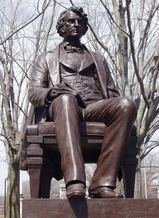 Sumner in 1850, a year before his election to the senate 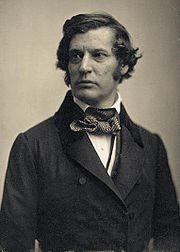 Charles Sumner was a Massachusetts Senator, lawyer, and abolitionist who lived from January 6, 1811 until his March 11, 1874. He was the son of Charles Pinckney Sumner, a prominent abolitionist who argued not only for freeing slaves, but the need for their absolute equality in all areas of society.  After graduating from both Harvard College and Harvard Law School, he entered private legal practice in addition to lecturing at his Alma mater. Needing a break from his everyday life, he toured Europe extensively between 1837 and 1840, learning French, German, Italian, and Spanish. While there, he was pleasantly surprised by the openness and the nonchalant mixing of races while attending lectures at the Sorbonne. This experience hardened his resolve to fight for the causes of racial and social equality, prominent themes throughout his career which literally almost killed him. The Lord Chancellor of Britain described "never [having] met with any man of Sumner's age of such extensive legal knowledge and natural legal intellect."1

Sumner became known for his powerful oratory and impressive public displays of virtue. He not only spoke out against the Mexican-American war, claiming it was a tool of southern slave owners to expand slavery, but also fought for the end of segregation. In the landmark court case Roberts v Boston, Sumner argued for the end of separate facilities in school, noting how the facilities for free African-Americans were notably worse than their white counterparts. He promulgated many principles which would later be used in the Brown v Board of Education (1954) decision, mainly how segregation in this formative area of education led to the spread of cultural division and discrimination between Americans of different races. While Sumner lost the case, it created legislative and social momentum towards the Massachusetts legislation abolishing segregation in schools in 1855.

Sumner began his political career with his election to the US Senate in 1851. He represented a radical section of the Free Soil and later Republican parties. Sumner was never afraid to express his divisive views, regardless of whom they offended. He declared,

“the Senator [Joshua Hill] assumes that the former rebels are the only people of Georgia. Sir, I see the colored race in Georgia. I see that race once enslaved, for a long time deprived of all rights, and now under existing usage and practice despoiled of rights which the Senator himself is in the full enjoyment of.”6

He strongly supported the limiting of the expansion of slavery, through which Sumner argued "Slave Power" (a derogatory term for the powerful political machinations of southern slaveholders) would come to dominate the United States. Sumner opposed both the Compromise of 1850 and the Fugitive Slave Act.

Sumner’s most famous political incident occurred in 1856. After giving a speech in the Senate during which he angered southern Senators, Sumner was brutally beaten in the Senate chamber by South Carolina Representative Preston Brooks. He was almost killed, barely able to escape due to his eyes being covered in blood. This incident launched the nascent Republican party into the national spotlight and rallies supporting Sumner sprung up all over the north. He took nearly 3 years to return to the Senate floor due to the severity of his injuries. He traveled around Europe restoring his health and generating support for the cause of abolition.

During the Civil War, Sumner was a key confidant of Lincoln and was among the foremost proponents of full emancipation for the slaves. Lincoln described Sumner as “my idea of a bishop,”1 and valued his input tremendously. Sumner also strove to ensure loyalty among the Union leadership, even arresting Union generals who lost battles. He also took the lack of southern opposition resulting from the secession of pro-slavery representatives as an opportunity to defend the rights of emerging nations such as Haiti or the Dominican Republic. Sumner fought for and delivered the diplomatic recognition of Haiti as a nation that it had sought from 1804-1862 but which had been denied due to its population being descended from former African slaves.

After the war, Sumner supported the purchase of Alaska from Russia. His main contribution continued to be in the area of civil rights, demanding that the freedmen be allowed to vote should they, as well as all other citizens, pass a literacy test. He also strove to remove racial distinctions, mainly the word white, from federal legislation in order to preserve the natural rights entrusted to all citizens in the Constitution and Declaration of Independence.

Sumner is rightfully considered a hero of the north, the underrepresented, and the oppressed. This particular statue was erected in 1902. It was originally submitted for consideration to a committee designing a statue of Sumner in 1876 to be placed in the Boston Public Garden. The design won when submitted by an anonymous sculptor, however it was rejected when it was discovered the design was the work of a woman. In 1902, friends of the sculptor, Anne Whitney, paid for its construction to honor the great son of Massachusetts, Charles Sumner.