The Phoenix Life Insurance Company Building was completed in 1963 as part of Hartford's urban renewal program. Similar to other American cities, Hartford sought to promote urban development in its city core during the 1960s and 1970s to respond to suburban growth that left parts of the downtown area with fewer businesses and families. The building is unique for its two-sided design which resulted in its nickname among locals as "the boat building." In addition to encouraging more companies to locate or return to the downtown area, the building serves as a distinct example of the modernist architectural movement that featured floor to ceiling windows throughout every office to create a mirrored glass exterior facade. 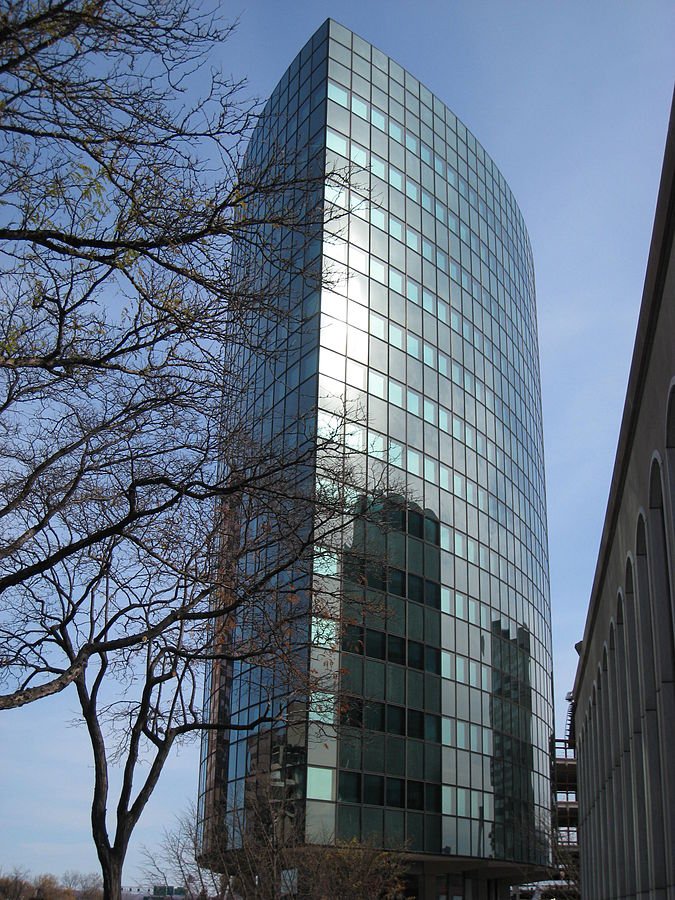 The first two-sided building in history, The Phoenix Life Insurance Company Building (opened in 1964) serves as an excellent example of the Modernist style, distinguished by its lenticular plan -- locally referred to as "the boat building" due to its shape.  Along with the building's architectural significance, it stands as a monument to the urban renewal movement common in U.S. cities in the decades following World War II.
As with most of the nation's cities that undertook urban renewal efforts, Hartford intended to curtail suburban migration, alleviate traffic issues, deal with urban blight, and fix difficulties related to urban flooding -- to name a few. Along with new, federally funded interstate highway system, Hartford sought to create an area of downtown known as "Constitution Plaza." With companies like Phoenix Life Insurance, which had been in Hartford since 1851, hopping on board the project, the plaza idea came to fruition; thus urban renewal in Hartford became a reality.
The Phoenix Life Insurance Company Building was designed by the acclaimed Max Abramovitz, a principal in Harrison & Abramovitz from 1945 - 1976, which was one of the leading architectural firms in the United States and known for its role in planning and designing the United Nations Headquarters (1947-1953) and Lincoln Center for the Performing Arts (1955-1969) in New York.

Construction proceeded rapidly with the steel framework in place by June 1962 and the glass facade completed by May 1963. The unique, two-sided building generated enormous public interest. State and national newspapers reported on the building's progress and hosted 12,000 visitors during its first year of operation in 1964. The project received a special award at the New England convention of the American Institute of Architects in 1965.
The building stood as one of the anchors of Constitution Plaza, a project that was one of the earliest examples of urban renewal. The formal dedication was slated for November 24, 1963, but the had to be canceled due to the assassination of President John F. Kennedy. Instead, the ceremony arrived in December 1963, noted by the New York Times writing, "Hartford Launches a Tall, Glass Ship-Shaped Building." The event included a formal lowering of a floral wreath by crane from the top floor into the reflecting pool of the plaza courtyard, meant to indicate the company's re-commitment to Hartford.
In 2010, the U.S. Green Building Council awarded the building a Silver LEED (Leaders in Energy and Environmental Design) certification, making it the first office building in New England to be both LEED-certified and listed on the National Register of Historic Places.
However, while the building proved a success, as was the overall business development in the Plaza, not all stories related to urban renewal can be viewed as positive as the process also included forced population and business displacements. Indeed, public opposition to the demolition of the existing neighborhoods, especially in areas populated by Italian-Americans since the turn of the century, delayed the project. Moreover, in Hartford, many projects incurred obstacles as the economic climate changed; a plan to construct mixed-income housing never materialized.
To look at the building today is to see how architecture advanced in the post-WWII era concurrent with many cities seeking to reinvigorate downtown neighborhoods and business districts. The urban renewal efforts of many cities, including Hartford, can be seen through structures such as the Phoenix Life Insurance Building, but what can't be seen are the how some lives were altered via displacement as a result of urban renewal.