The Chatham Light is a fully operational lighthouse located in Chatham, Massachusetts on the elbow of Cape Cod. The lighthouse was originally built in 1808 as the second light station on Cape Cod. To distinguish between the Chatham Light and the Highland Lighthouse in North Truro, the Chatham Light was formerly built as two identical full light towers known as “Twin Lights”. Standing at 48 feet tall and 80 feet above sea level, the two towers were first built with wood then rebuilt in cast iron during 1877. In 1923 the Twin Lighthouses were separated, moving one tower to Eastham, Massachusetts where it was renamed Nauset Light. The Chatham Light was added to the national register of historic places on June 15, 1987. Today it is an active U.S. Coast Guard station including maritime law enforcement, homeland security missions, along with search and rescue. The Chatham Light stands at the top of Lighthouse Beach, a pristine strip of beautiful sand which attracts tourists and locals to its shore. 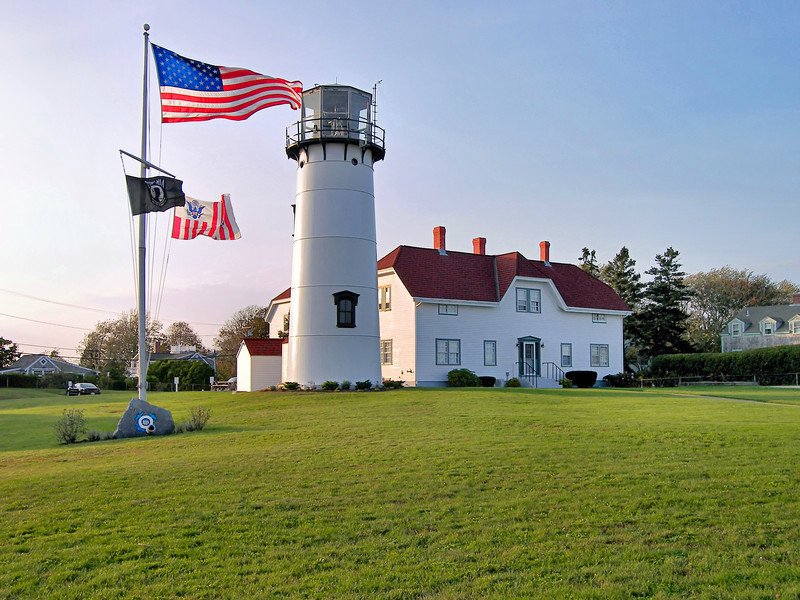 Standing at 48 feet tall and 80 feet above sea level, the Chatham Light is an iconic landmark in the town of Chatham. During the nineteenth century, there was heavy maritime traffic flow in front of Chatham on the edge of Cape Cod. Due to the strong current and dangerous shoals off of the shores of Chatham, there was need for guidance to those out at sea. In April of 1806 after the establishment of the first lighthouse in North Truro, Congress gave $5,000 for a second lighthouse station in Chatham. Congress then made a second appropriation of $2,000 in 1808. It was decided that the new station would have two fixed lighthouses. The Chatham Light would consists of two wooden octagonal towers, standing at 40 feet tall and 70 feet apart. A small dwelling house was built with one bedroom. Samuel Nye was appointed as the lighthouse's first official keeper by President Thomas Jefferson.

In 1833, Lt. Edward Carpenter of the U.S. Navy visited the Chatham Light reporting that the structures were shaken and decayed, causing danger in high winds. The Treasury Department announced later in 1841 that the towers would be taken down and rebuilt at the expense of $6,750. That same year, 17 panes of glass in the lanterns shattered due to immense storm weather. Rats also soon burrowed into the lighthouses. The Keeper Hower at the time blamed the poor construction and lost his job soon after due to political reasons.

In 1875, Keeper Hardy counted 16,000 vessels passing the lighthouse and reported on serious erosion problems developing along the shoreline. In November of 1870, a tremendous storm hit Cape Cod causing rampant erosion. Quick action was taken to rebuild the Chatham Light station farther away from the bluffs of the shore. Two new 48 foot conical cast iron towers were soon erected in 1877. Two one-and-a-half story dwellings were also made out of wood frame to house the principle keeper, the assistant keeper, and their families. Fifteen months later, the old keeper's house collapsed.

During the 1900’s, the Lighthouse Board concluded that the twin light stations were an unnecessary expense. The north light was then moved one town over to Eastham, Massachusetts to replace the “Three Sisters” lighthouses in Nauset. This ended the history of 115 years of Twin Lights in Chatham. A new rotating lense was placed in the remaining tower instead of the incandescent oil vapor lamp. In 1939, the Coast Guard electrified the light rather than continuing to use its origin kerosene. According to articles in 1937, the Chatham Light station received more than 1,500 visitors in the summer of 1936 marking the lighthouse’s turning point as a new tourist destination. The light became automated in 1982 and remains an active part of navigation off the coast of Cape Cod. Although erosion has slowed throughout the years, new threats have developed putting the Chatham Light at risk. Due to the winter storms of 1987 and 1991, new breaks have been formed in the berrier beach east of the lighthouse. The town of Chatham is now implementing erosion control measures to the coast to save the historic lighthouse.

The United States Coast Guard maintains an active guard station at the Chatham Light. It is most famous for its rescue of the SS Pendleton during the severe nor’easter off of the New England coast in February of 1952. During this notably extreme winter storm, two ships, the SS Fort Mercer and the SS Pendleton, broke in half and ran aground off the coast near Chatham. Although the Pendleton was unable to make a distress call, the ship was discovered on the shore radar. The Chatham Light was equipped with a lifeboat station, allowing the Coast Guard to rescue the crew from the Pendleton’s broken stern section. The U.S. Coast Guard vessels, lifeboat stations, and air craftsmen worked under the most severe and intense winter conditions to save the crew members off the broken ships. The Coast Guardsmen faced freezing temperatures and waves reaching the height of over 60 feet to save those from the Pendleton. In total, 62 people were rescued from the ships or water. For their brave heroism and rescue, five Coast Guardsmen earned the Gold Lifesaving Medal, four earned the Silver Lifesaving Medal, and 15 others earned the Coast Guard Commendation Medal. Without the efforts of the brave volunteers from the Chatham Light Coast Guard, the course of history would have been dramatically different along the shores of Cape Cod.