The Falling Star statue was created in memory of the time that a meteorite shower struck the town of Sylacauga in 1954, hitting the home of Ann Hodges. The meteor was taken to the Alabama Museum of Natural History in Tuscaloosa, AL. The monument was created by a well-known sculptor, Don Lawler after learning the art of white marble sculpting. The statue, created in 2009, now stands in front of the Sylacauga Municipal Complex. 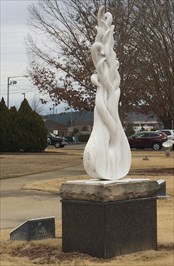 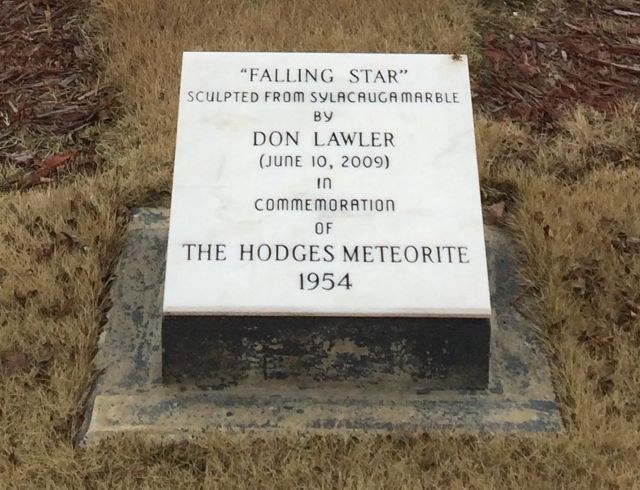 Meteor showers are one of many astronomical events that can be breath-takingly beautiful to witness, but can also turn destructive. A meteor is created once a piece of space rock enters the Earth's atmosphere traveling at a very high speed. Meteor showers are normally visible without any type of magnification device, such as a telescope. This is due to the rocks becoming very hot from high-speed travel. This event is what we also call a "shooting star".

Although meteor showers are rather common, it is rare for them to hit Earth. Due to their small size, they normally burn up in the atmosphere. Cornell estimates that roughly 36 to 166 meteorites hit the Earth every year. One of these events occurred in 1954 in the town of Sylacauga. During this time, a meteor crashed into the home of Ann Hodges and struck her. This is a locally well-known event that is remembered by many.

This occurrence later caught the attention of professional sculptor, Don Lawler. He creates stone sculptures to tell stories in hopes of educating the public of past events. His main goal is to create contemporary art to spark creativity. It wasn't until 2009 that Lawler discovered the meteor shower event in Sylacauga. This inspired him to use his new found talent of white marble sculpting to create the Falling Star monument.

White marble sculpting is one the oldest forms of art used to capture three-dimensional objects. This form of art is widely known in the creation of Roman and Greek sculptures. Though these two styles of art are very different, they are both famously known for being created from white marble. The use of white marble in the creations by Lawler is a representation of common art practices used to show history through sculpture. The Falling Star monument is one of many examples of this art form.