The Boston Custom House stands as a prominent reminder of Boston’s role as a major port throughout American history. Initially completed in 1847 on what was then the waterfront, the building was home to the offices of Customs officials who regulated imports into what was then New England’s most active port [1]. The Customs House is further remarkable for its architecture. In Greek Revival style, it boasts Doric columns on all four sides and an intricate domed roof. As if this original architecture were not impressive enough, a 495-foot clock tower addition was completed atop the dome in 1915 in order to add more office space; once the tower was added, the Custom House became the tallest building in Boston for its time [2]. However, the Customs staff continued to grow, prompting custom officials of the United States Customs Service to move to the O'Neill Federal Building in 1986 [1]. This left the Custom House unoccupied and inaccessible for fourteen years, until it was converted into a timeshare residential facility by Marriott Vacation Club International in 1997 [3]. Its first-floor rotunda remains open to the public and houses a smattering of maritime art exhibits. Today it stands as a key component of the Boston skyline, its signature pyramidal top a reminder of Boston’s maritime significance throughout colonial history and beyond.

The original structure of what is now the Custom House. This render represents the structure in 1856, before the clock tower addition was built. Photo used with permission: https://www.flickr.com/photos/126377022@N07/1478015565 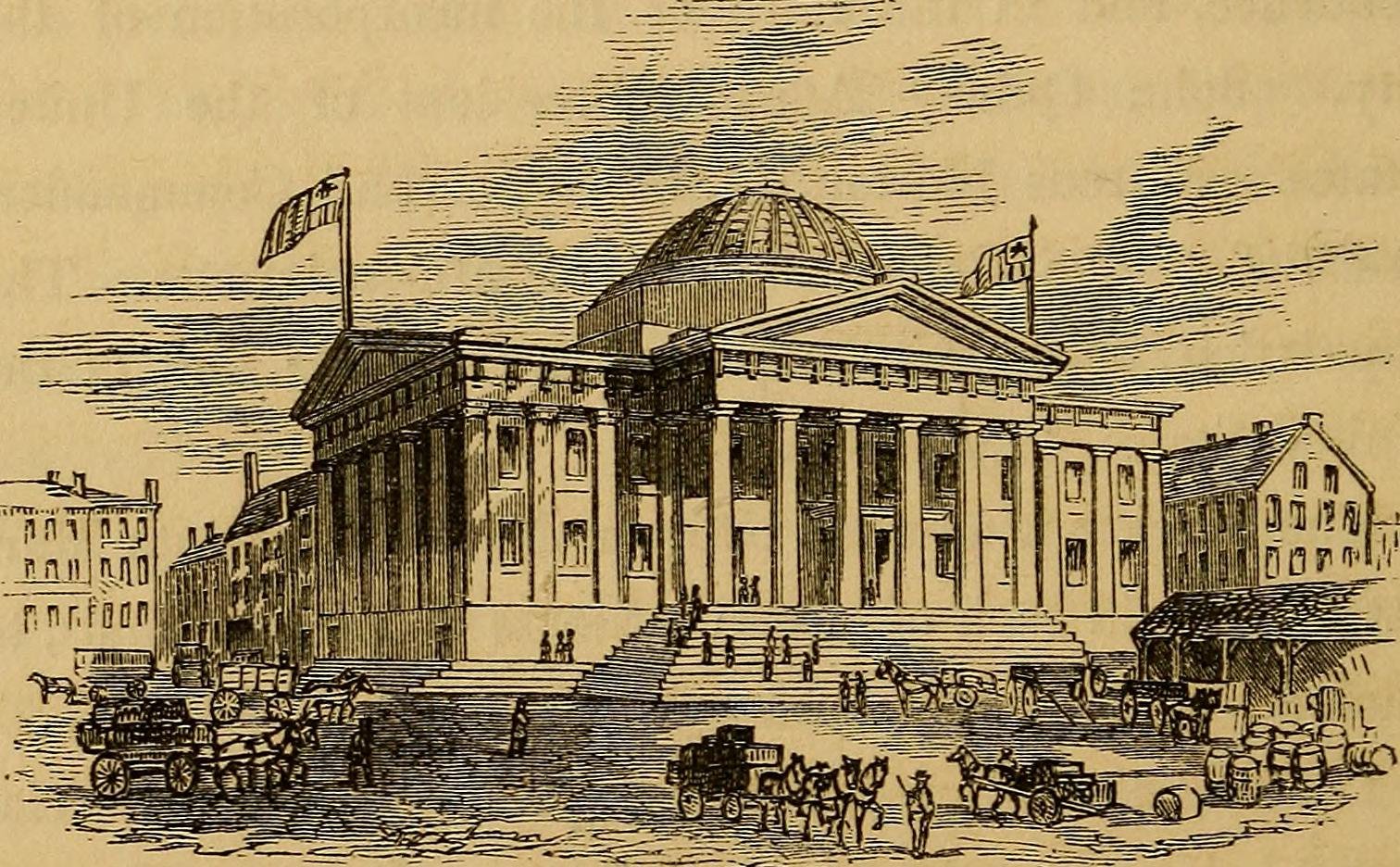 The Custom House in 1915 with the clock tower addition. At this point, the Custom House was the tallest tower in Boston. Source: WikiMedia Commons (used with permission) https://sk.wikipedia.org/wiki/S%C3%BAbor:CustomHouseTower_Boston_DetroitCo.jpeg 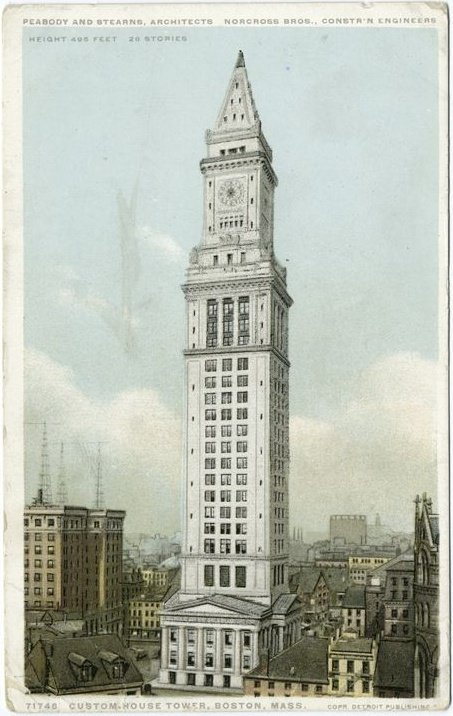 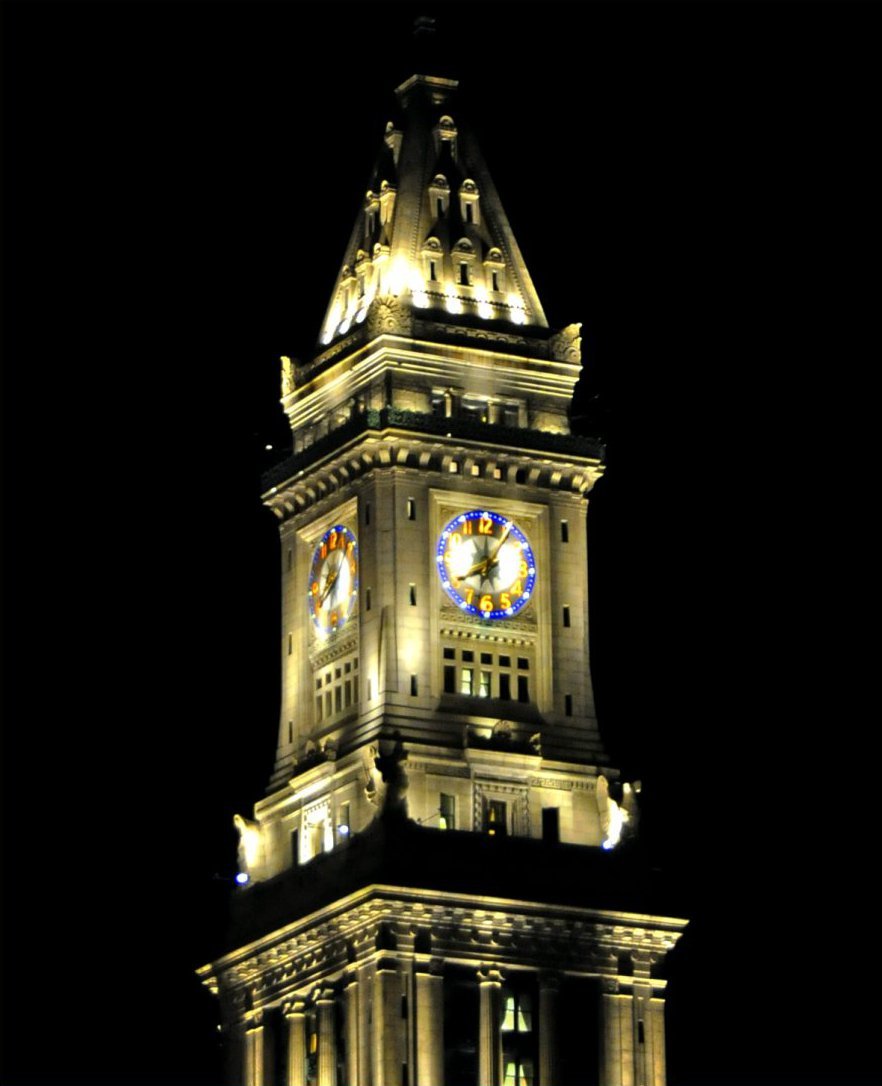 Originally, there was no central location for customs-related activity before and immediately after the American Revolution. In 1810, a two-story, 60 square foot, brick and mortar building was constructed near the Central Wharf. This edifice, designed by Uriah Cotting, was utilized until the construction of the Custom House that still stands today. This Custom House — funded by the 23rd Congress — earned its design from Ammi Burnham Young, who won a competition among other architects. The building took 10 years to complete at a cost of one million dollars [1].

When the Custom House was built in the mid-19th century, it was crucial in funding the United States government. At the time, there was no federal income tax, so duties and taxes on goods entering Boston’s ports provided necessary spending money for the relatively young government [4].

Fraud and smuggling were issues those in charge of the Custom House had to combat since its inception. Though smuggling techniques were certainly not very advanced in the mid-19th century, neither were measures used to impede smugglers. According to an entry in the Bulletin of the Business Historical Society, “In one case an offender operated contrary to the customary smuggling practice of dealing in small articles of high unit value, by conducting an illicit importation of horses.” In response to overland smuggling of this nature — often conducted between Canada and Massachusetts — one revenue officer relied on informers to contend with an “abnormal amount” of smuggling [6]. The work of these agents allowed the Custom House to remain effective in its official duty- and tax-collecting capacity.

The Custom House achieved its stature as one of the most — if not the most — prominent buildings in the Boston skyline because of Boston’s building code. Before 1928, commercially-owned buildings were capped at approximately 11 stories, but since the Custom House was a federal property, it was allowed to add a 25-story tower. This tower was designed by Peabody and Stearns, an architectural firm based in Boston [4]. The tower came about because of space constraints in the original building. By the late nineteenth century, Boston’s port was not receiving the same volume of imports as others, such as New York and Philadelphia [4], but its intake was growing nonetheless. As a result, the functions of the Custom House were also expanding, and the demand for more office space led to the proposal to build the 495-foot tall tower [1].

Today, the Custom House is overshadowed by much taller buildings, but its clock face still serves as an icon despite upkeep issues that have resulted from its age [5]. Specifically, the tower clock has trouble making it through the tough winters of the northeast, with complications occurring from winds, freezing rain, and of course, snow [5]. In response to the decaying clock, David Hochstrasser, a clock-shop owner in Winthrop who looks after the clock face with his brother, did renovations in 1987 by replacing the four minute-hands and doing internal adjustments; because the renovations are about 30 years old, there will need to be new renovations soon [5].

Furthermore, as previously mentioned, the interior of the customs house was not always as useful as it is today. Wanting to change it from an unoccupied building to something more useful, The Marriott Corporation redesigned the inside of the Customs House, reimagining it from its older, less inhabitable state into to an “innovative” condominium timeshare [7]. The details of this project include the ability for investors in the timeshare to use the condos on specific dates of the year, or exchange these shares for use at other Marriott-associated destinations [7].