Erected in 1888, the Boston Massacre/Crispus Attucks memorial remains a vivid reminder to the founding ideals of the United States. Sporting a large bronze statue symbolizing the spirit of the Revolution, a bronze engraving of the massacre, and a towering concrete spire with the names of those who perished, the memorial stands 25 feet tall and 10 feet wide. The Boston Massacre was a defining powder-keg moment for revolutionists in the British colonies and helped to embolden the burgeoning anti-British movement in the colonies.

Relief of Paul Revere's famous engraving of the scene, depicting Crispus Attucks laying dead while British soldiers continue to fire into the crowd. 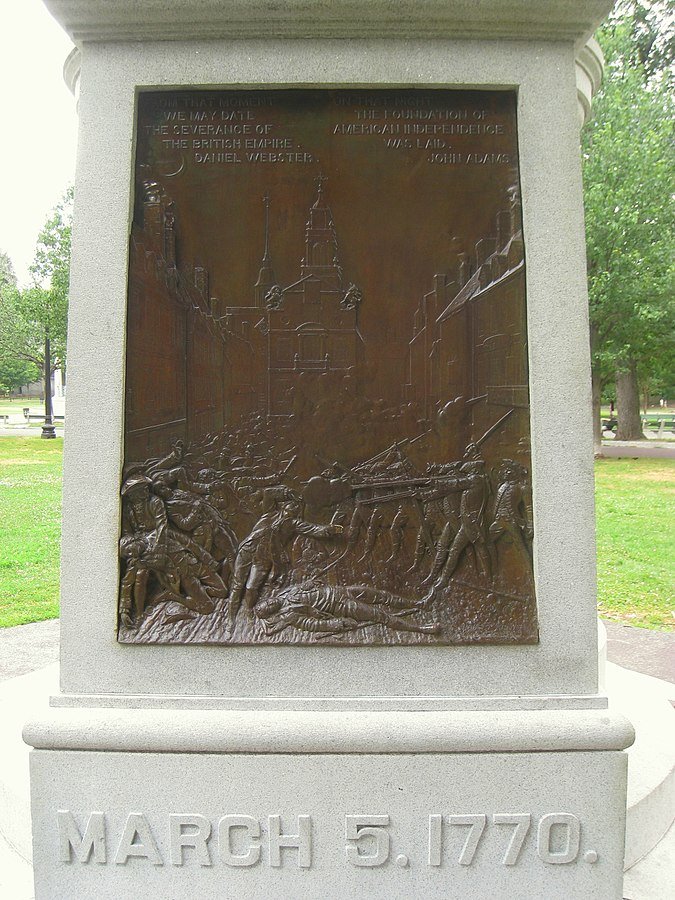 Postcard of the statue printed circa 1900. 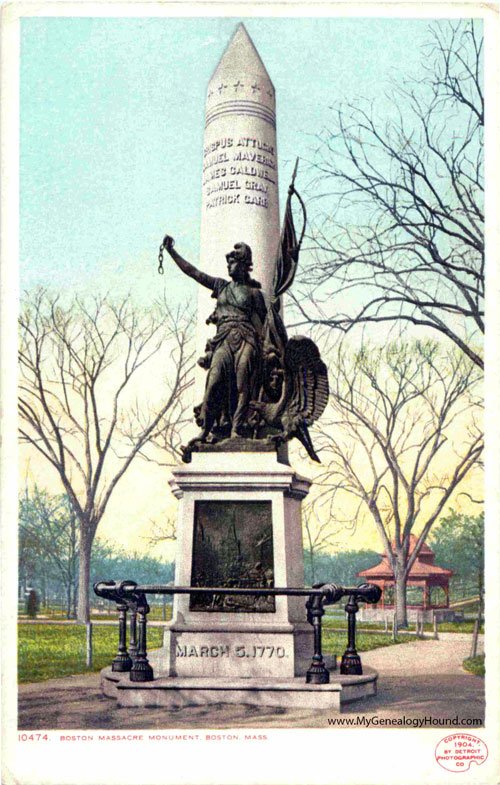 Starting in 1764, the British government rolled out a series of restrictions and taxes on the Colonies, culminating with the hated Townsend Acts - legislation requiring major taxes on paper, paint, tea, lead, and glass. In order to enforce the taxes, the British ordered more than 2,000 soldiers to occupy Boston, a major city and port at the time. In 1770 the ratio of British soldiers to colonists was 1 to 4, and skirmishes between revolutionists and the soldiers became increasingly common throughout the early part of the year. The patriot colonists further took to organizing against the regulations by forming mobs and vandalizing establishments of those loyal to the British.5
Then, on the night of March 5th, 1770, five colonists were slain by British soldiers. Private Hugh White was stationed outside the Boston Customs House, alone, when a mob of patriot colonists began berating and insulting him. After striking a colonist with his rifle, White was inundated with snowballs, rocks, and other projectiles, causing him to call for reinforcements. Captain Thomas Preston then arrived with several other soldiers and entered into a defensive formation protecting the money stored inside the Customs House.5 Eventually, some colonists began hitting the soldiers with clubs and the word “fire” was shouted from somewhere. The result was a bloodbath; five colonists perished, highlighted by the first to fall, Crispus Attucks. Attucks was depicted on Paul Revere's famous engraving of the scene, lying dead while bullets rang out at the other colonists.4
The Boston Massacre became a warning of the greater British tyranny, mainly due to Revere's engraving being distributed throughout all the colonies by the Sons of Liberty. Tensions between the British and colonists continued to flare up at an ever increasing rate until the American Revolution, and the Boston Massacre is viewed as one of the primary sparks igniting the patriotic fuse. The slain became martyrs, headed by the escaped slave Attucks.1 Attucks' notoriety as an African-American patriot developed during the early Civil Rights movements of the 1890’s. Booker T. Washington even held Attucks in high regard, and as a result, Attucks became a prominent example of an African-American patriot.2
Over a century later in 1887, the Massachusetts General Court decided on a plan to memorialize the Boston Massacre by creating the memorial that exists today. However, many groups including the Massachusetts Historical Society and numerous city officials opposed the plan. The opponents of the monument claimed the memorial was nothing more than political opportunism, distorting history and injecting an American prejudice into the events that transpired on March 5th, 1770.3 The objections did not outweigh the support of the monument, and architect Robert Kraus was commissioned to build the memorial along a pathway in the Boston Common.