Commissioned by Samuel Pugh Hamilton, this home was built in 1873 by J.S Hall. He was influenced by the style of the Second Empire. The house has a central hall with Italian characteristics: a mansard roof, large windows with heavy moldings around them, and cast iron balconies. The building and carriage house are made out of Savannah brick that is covered in stucco. The house also had pipes to have conversations through the four floors of the home and was the first home in Savannah to have electricity installed. Francis Turner was the second owner of the home. The home turned inn is also known as the Grand Victorian Lady.

The front view of the inn. Retrieved from New Georgia Encyclopedia. https://www.georgiaencyclopedia.org/file/12058 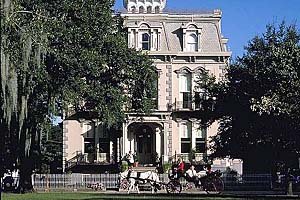 The front view of the inn in the evening. Retrieved from Expedia. https://www.expedia.co.uk/Savannah-Hotels-Hamilton-Turner-Inn.h2891097.Hotel-Information 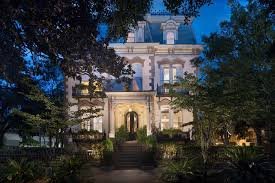 The front parlor of the inn. Retrieved from Hamilton Turner Inn.Com. https://www.hamilton-turnerinn.com/ 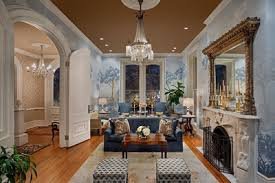 Samuel Pugh Hamilton was born July 2, 1837. He served in the U.S Navy until he gave up the position to join the Confederate army at Ft. Pulaski under Colonel Lawton of the Georgia Battalion where he served until the Civil War ended. In 1862, he started his jewelry business called “Hamilton’s Fine Watches and Jewelry”. He sold the business in 1889 so that he could spend more time working in the Brush Electric Light and Power Company. During his time in the Navy, he married Emma Sprigg, and they had two children before her death in 1862. On June 10, 1866, he married his brother’s widow Sarah Virginia Stillings

Hamilton’s fame grew in the 1880s. He became an alderman and continued his jewelry career. He was the Grand Recorder and Grand Master of the Knights Templar, Solomons Lodge, Masons. He also worked with the Savannah Cotton Mills, the Tybee and Savannah Rail lines, and the Tybee Beach company. Hamilton was also an optician. At this time, he was elected President and Treasurer of the Savannah Ice Manufacturers and Artesian Ice and Storage Company. He hosted many formal dinners, cotillions, costume parties, and visiting dignitaries at his home. Due to his elite standing and hosting of parties, he became known as “The Lord of Lafayette Square”. Electricity was implemented in the parlor of the Hamilton house in 1883. It was the first residence to have electricity in Savannah. In 1886, the whole house had electricity installed and Hamilton became president of the Brush Electric Light and Power Company.

In 1898, the home was almost destroyed by the Great Savannah fire, thought to only have been saved by the tin roof. In 1915, osteopathic doctor Francis Turner, the man who owned Savannah’s first electric car, bought the house. He and his family lived there until 1926. In 1928, the home was used for boarding Marine hospital nurses until the Turner family moved back into the house in the 1940s. During that time, Turner turned the courtyard level into an office space for his medical practice. The Turners sold the home in 1964 to officials of the Cathedral of St. John the Baptist. They wanted to destroy the home and turn it into a playground for their school, but The Historic Savannah Foundation saved the house after years of negotiations.

Many people owned the house over the next thirty years. In 1991, Nancy Hill and her husband bought the house and used it as an apartment building. Nancy continued to live there after her divorce and after she sold it in 1997. She lived in the basement and managed the Inn for many years. Nancy is known as “Mandy” in the popular Savannah book “Midnight in the Garden of Good and Evil,” written by Jon Berendt. The novel also mentions parties thrown by a manager of the home at one time, Joe Odom. The current owners are part of the Historic Savannah Foundation that saved the home in the 60's. The house, now an inn, is very popular among those that stay there and is considered to be a must-see historical site.