The Lewis and Clark Expedition, in its movement across the North American Continent, finalized its trek to the Pacific Ocean across what is now the State of Washington. In anticipation of the bicentennial of the expedition, the Washington State Society Daughters of the American Revolution marked four Lewis and Clark Expedition campsites across Washington State with stones engraved with original diary excerpts of the expedition. The front of the marker displays the NSDAR insignia, the Lewis & Clark Corps of Discovery logo and the words “Lewis and Clark Trail” highlighted in gold leaf. The back of the marker quotes William Clark in his journal: November 18, Monday 1805 William Clark recorded in his journal that on this date: "I set out with 10 men and my man York to the ocian by land.... (later in the day) … I found Capt. Lewis name on a tree. I also engraved my name.... I crossed the neck of the land low and 1/2 of a mile wide to the main ocian. At the foot of a high open hill.... I ascended this hill which is covered with high corse grass. Descended to the N. of it and camped.” Marker placed by Washington State Society - Daughters of the American Revolution - October 21, 2000.

NSDAR insignia, the Lewis & Clark Corps of Discovery logo and the words “Lewis and Clark Trail” highlighted in gold leaf. 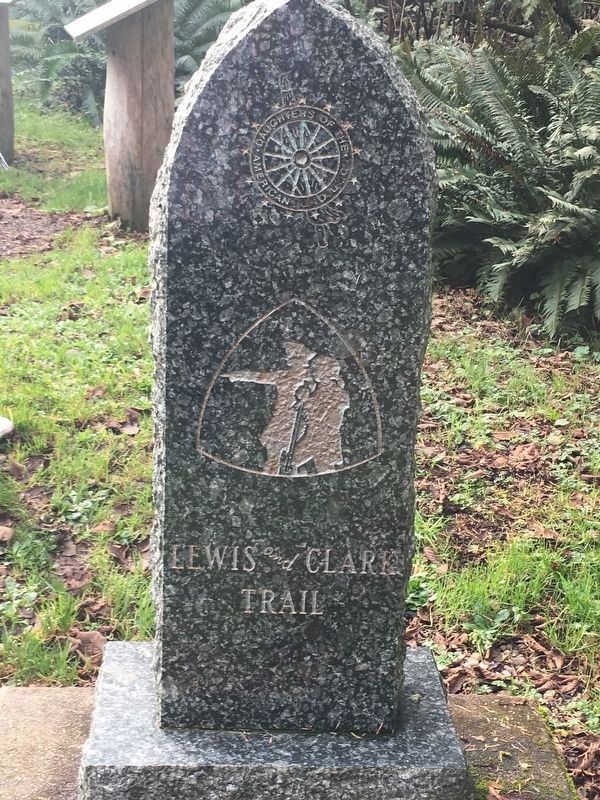 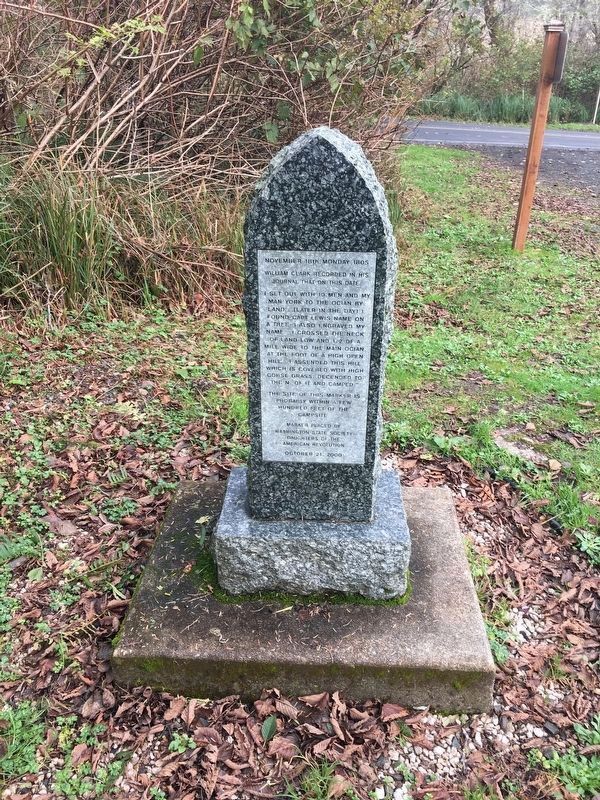 This marker is the most western campsite of the Lewis & Clark Expedition and is near Ilwaco, Washington in Pacific County and can be reached from Cape D Road when traveling south. The marker is located south of the parking lot at McKenzie Head in Cape Disappointment State Park. This park offers 8 miles of hiking trails and this marker resides at a trailhead. Nearby along the trail, are 8 interpretive panels. The Lewis & Clark Interpretive Center is also at this park on a cliff overlooking the Pacific surf with a glassed-in observation deck.

The Washington State DAR received a $10,000 grant from the National Park Service, under the direction of Richard Williams, for Lewis & Clark marker series and the Tresko Monument company of Spokane contracted to make the markers. According to WSSDAR State Historian Leota King, the states of Kansas, Missouri, Montana, and Washington used the same stone and design to bring conformity to the Trail. The marker is made of Lake Superior green granite,

Excerpt from Lewis & Clark Trail Heritage Foundation WA Chapter Newsletter, January 2001 edition: submitted by Leota “Lee” King: On October 21, 2000, The fourth special marker on the Lewis and Clark trail in Washington was dedicated… Expecting rain, the City of Long Beach loaned a tent for the ceremonies, and Park Manager Larry Chapman and his staff borrowed chairs from a local church and helped in many other ways. About 60 or 70 people attended… This is the final marker in this project. The Daughters of the American Revolution are honored to have been able to place these markers along the trail made by those special people—Lewis and Clark, Sacagawea and little Pomp, York and the other hunters, boatmen, soldiers and (let’s not forget) Seaman.

In 1999-2000, the Daughters of the American Revolution (DAR) erected four historical markers engraved with journal entries of the Lewis & Clark journey through what is now Washington State. They placed these markers at or near the actual campsites of the exploration party. Some of the sites have supplementary tablets of historical information adjacent to the marker. Two of the markers are near interpretive centers and one is within a park planted with vegetation native to the area during that time period. The DAR coordinated their effort with other states commemorating the trail, to install monuments of similar style.