The Peace Convention of 1861

Kept in secrecy within the Willard Inter-Continental Hotel in Washington D.C, representatives from twenty- one of the thirty-four existing states in the U.S met to bring a peaceful compromise to what would eventually be referred to as the Civil War. Occurring from February 4th until February 27th of 1861, more than one hundred politicians met with the goal of ending the tensions within the nation arising from the northern and southern states. After the rise of Abraham Lincoln and the Republican Party, the southern states found themselves desiring more than ever to leave the Union. Unfortunately for those desiring an end to the conflict, the attempt would eventually fail as many southern states had a goal of leaving, and as such the bloodiest war in American history would last for 4 years. While this final attempt to prevent war did fail, a monument was built to honor the attempt of a diplomatic solution.

The plaque is located on the Pennsylvania Avenue side of the historic hotel. Photo by Richard E. Miller, March 18, 2008 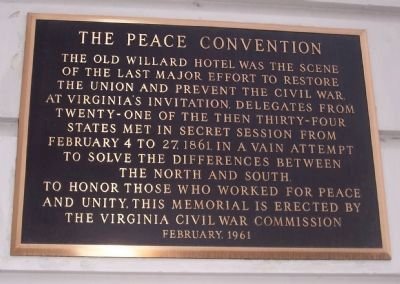 A photo by Richard E. Miller, March 18, 2008 in front of the Willard Inter-Continental Hotel in Washington D.C 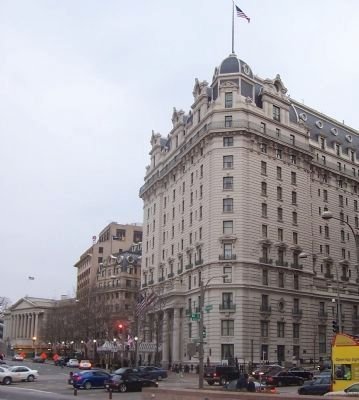 February 4th, 1861 was the first day of what would soon be recognized as a final attempt to prevent the bloodiest war in United States history. For nearly a month, representatives from twenty- one of what was then only thirty- four of the existing U.S. states met in secret within the Willard Inter- Continental hotel within Washington D.C. No state from the deep south (South Carolina, Mississippi, Florida, Alabama, Georgia, Louisiana, and Texas) had sent a representative, for they had already passed ordinances to secede from the Union, nor did the states of Arkansas, Michigan, Wisconsin, Minnesota, California, or Oregon. Of the states that did bring forth a representative, fourteen were free states while seven were slave states.

After the election of 1860, where Abraham Lincoln and the Republican Party had won the election, tensions between the northern and southern states were reaching their climax. With southern threats of succession from Union, four attempts prior to this meeting were conducted to create terms that both sides could agree on. John J. Crittenden, a constitutional Unionist from Kentucky, began the attempts with the Crittenden Compromise which consisted of six amendments, many of which opposed Lincoln’s views, which he hoped would put the conflict to rest. Unfortunately for Crittenden, the proposal was rejected, and as such he revised his work to make it more suitable for Republicans. Like the previous time, however, it was rejected which lead to a team consisting of John A. Gilmer from North Carolina, Robert H. Hatton from Tennessee, J. Morrison Harris from Maryland, and John T. Harris from Virginia working on a failed revision alongside of Crittenden. The final attempt before the war would occur from February 4th to February 27th of 1861.

The Crittenden Compromise itself focused primarily on the issues of race occurring within the country. While a Unionist, Crittenden’s focus wasn’t to abolish slavery, but rather to preserve it in the states where it was currently held, and to prevent the government from interfering with such matters, while forbidding slavery from states that were already without it. Slave owners would be completely protected, and any runaway slaves would be compensated for by Congress to their owners. The Crittenden Compromise would also ensure that at no time in the future would it be possible for any amendment to remove slavery or any other act by congress in the future by the Compromise’s sixth amendment. Upon the rejection of this proposal by both the House of Representatives and the Senate on each occasion, the Peace Convention, the final effort of compromise began.

The convention consisted of 131 government officials, a fair amount of whom qualified as senior statesmen, resulting in another name for the meeting- the Old Gentleman’s Convention (Klein pg. 239). While many had hoped for a true agreement to be made to prevent the Civil War, others from both sides were “watchdogs” with the intentions of looking out for their own desires. While this meeting was being conducted, another on February 6th lead by James Guthrie (democrat and Kentucky lawyer) consisted of a representative from each state and was tasked with drafting a proposal for the delegates to agree on. Over a span of three weeks, an amendment directed towards issues of slavery was created, which varied little from the Crittenden Compromise, and attempted to resolve the issue by simply extending the Missouri Compromise line to the Pacific Ocean (Revolvy Peace Conference of 1861). Due to the lack of change alongside of the southern issues not resolved, the final attempt for peace would inevitably fail resulting in the bloodbath known as the American Civil War.

Although each attempt for compromise had inevitably failed, a monument was created at the Willard Inter-Continental Hotel in Washington D.C. to honor the effort and determination from both sides for a peaceful resolution. In 1961, the Virginia Civil War Commission ensured the memory would last as the monument was created. Today one can visit the hotel and find the monument outside reminding all of the attempt that took place.