St. John's Baptist church is located in the town of Doresyville. The church was built between 1871 and 18 75. It is significant because it represents the earliest symbol of community in the town. The town got its name from Reverend Bazile Dorsey, the first reverend of St. John Baptist church and the recognized founder of the community. The village developed in the years immediately following the Civil War as a place for Black agricultural workers to live. According to a cornerstone within the church, the building was organized in 1868, and incorporated on September 19th, 1869. By 1879, the town began to appear on Mississippi River Commission maps, and in 1893, a school was built, thanks to the efforts of St. John Baptist church. Although there is no written record of its founding, it seems likely that the community of Dorseyville sprang up around St. John's, judging from the early founding of the congregation and construction of the church building. The church stands a pivotal symbol for the high aspirations of newly freed Blacks. A majority of the renovations performed on the church only applied to the interior, so the building itself looks much like it did when it was first completed. 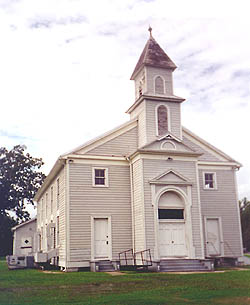