The final resting place for the coal miners killed in association with the 1898 Virden mining riot, the Mother Jones Monument is located in the Mount Olive's Union Miners Cemetery. Mother Jones requested to be sent back between the men she had fought for and beside. A true crusader to coal miners rights, Mother Jones and her symbolic monument represent the fight for miners and their push for labor rights.

The restored Mother Jones Monument in 2015. 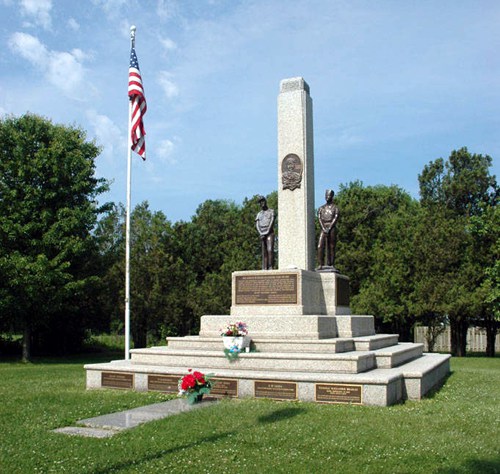 Mother Jones brought crowds to all of her meetings with the miners. 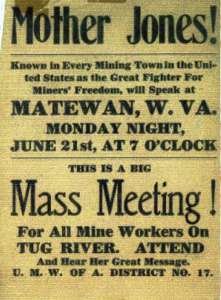 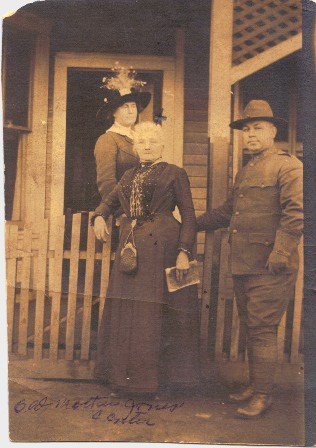 Mother Jones brought thousands to mourn the death of the nations “most well-known woman.”

A postcard of the Mother Jones Monument from the 1940s 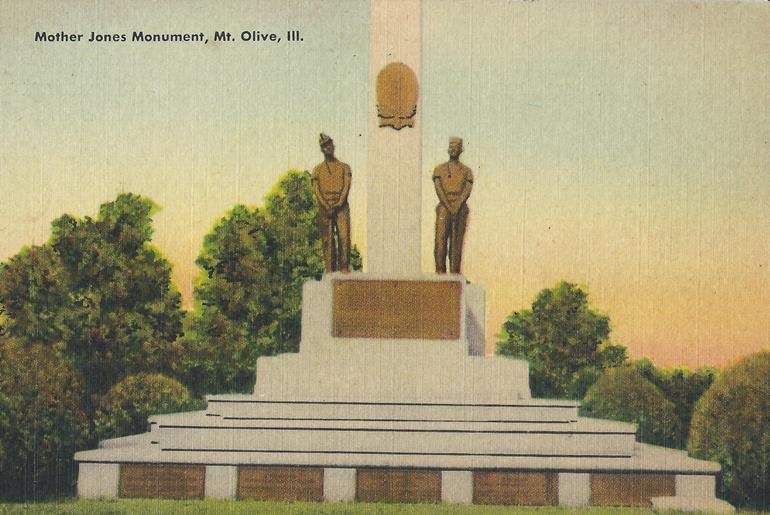 An Irish-born American schoolteacher and dressmaker, Mary G. Harris Jones, also known as Mother Jones, was a valiant fighter for workers’ rights. Mother Jones, born in Cork, Ireland in 1837 emigrated to Canada to eventually the Unites States of America earning wages by teaching and sewing. Jones then moved to Memphis and married a union worker by the name of George Jones. George Jones was an iron molder that was left behind in the city with his wife and family after the yellow fever stuck and the rich fled. Mary Jones witnessed her family perish, and one by one she watched her four children and husband fall ill and die in these, penniless times. Jones then moved to Chicago where she would sew for the rich, until that seized due to the Great Fire of 1871 making her homeless and without a job.
Jones then arose into labor and socialist movements with the sole purpose being to contest against these injustices. The late 1800s through the 1920s, Jones was a major role in strikes and labor injustices movements. Newspaper articles were calling her the “most well-known woman” in the United States. The United Mines Workers began a strike for living wages in the coal fields, and Jones was a respected piece of the union. Jones argued and debated that we should organize at the community level to demonstrate workers capacity for controlling their destiny. Jones also believed that unskilled workers, immigrants, and African Americans should be the focus of the new labor movement. One of Jones’ most well-known contributions was building workers’ commitment to unionism and bridging racial and ethnic divisions where she argued that the Black miners of West Virginia were the best trade unionists.
Jones worked with various ethnic groups who were committed to building a strong enough union to succeed in their quest for labor rights. According to the Mother Jones Museum, when an African-American woman, impressed with Mother Jones commitment to the cause, suggested she would kiss Jones’ skirt hem in gratitude for her contributions, Jones refused: “Not in the dust, sister, to me, but here on my breast, heart to heart.” Jones had a reputation of no matter where she may go she enters the lives of the lowest and becomes a part of them.
Jones brought a new style of unionism in the Pennsylvania coal fields that amplified women and children’s involvement in her push. When she went to West Virginia in 1900, West Virginia coal companies had been observing her and the UMWA’s success in Pennsylvania and Illinois and other Midwestern states. Justus Collins, the current mine owner, developed an approach that combined legal restraints with armed mercenaries against her and the miners. Jones encouraged non-violent civil disobedience through mass action whenever she found possible, however, this was not one of those times. When she violated an injunction in 1902 in West Virginia, refusing to be silenced and continued to speak out for justice, a prosecuting attorney arrested her, and Judge Jackson renewed an injunction originally issued in 1897. The prosecuting attorney calling her the “most dangerous woman in America” during the proceedings.
Her time in West Virginia did not end there, Mother Jones attempted to stop the miners from rushing into Mingo County in late August 1921. Mother Jones also visited the governor and left assured he would intervene before the right started. Jones opposed the march and rejoined the miners on the front lines and told them to go home. She claimed to have had a telegram from President Warren Harding offered to end the private police in West Virginia if the miners were to just return home. When UMW president Frank Keeney demanded to see the telegram, Mother Jones refused, and he criticized her for lying to them. Mother Jones not only refused to allow anyone to read the document, the President's secretary denied ever having sent one. After she fled the camp, Jones suffered a nervous breakdown.
The Mother Jones Monument was placed in Mt Olive, Illinois by the PMA as, “both a reflection of the origins of industrial unionism in the U.S. and an argument that, following in Mother Jones footsteps that ordinary men and women should play a role in the nation’s economic destiny.” Even today, economic inequality has caused an interest in her life. In 2012, Mother Jones was honored with the Cork Mother Jones Festival, and in 2015 the Mother Jones Monument site was re-dedicated, and the story of Mother Jones remains in Mt Olive, Illinois.