Battle of the Bridge

The Battle for the Bridge took place on April 29th 1863 between Confederate forces led by Generals William E. "Grumble" Jones and John D. Imboden and Federal/Union Forces. The objective of the mission was to capture the suspension bridge at this location and then destroy the Baltimore and Ohio Railroad bridge that was near modern day 12th street in Fairmont. It was the largest Civil War battle to take place in the northern part of what is now known as West Virginia as was part of the larger Jones-Imboden Raid. This raid lasted four weeks and covered over 700 miles.

The marker is now part of the West Virginia Civil War Trails. This battle was the largest fought in the northern part of what is now known as West Virginia 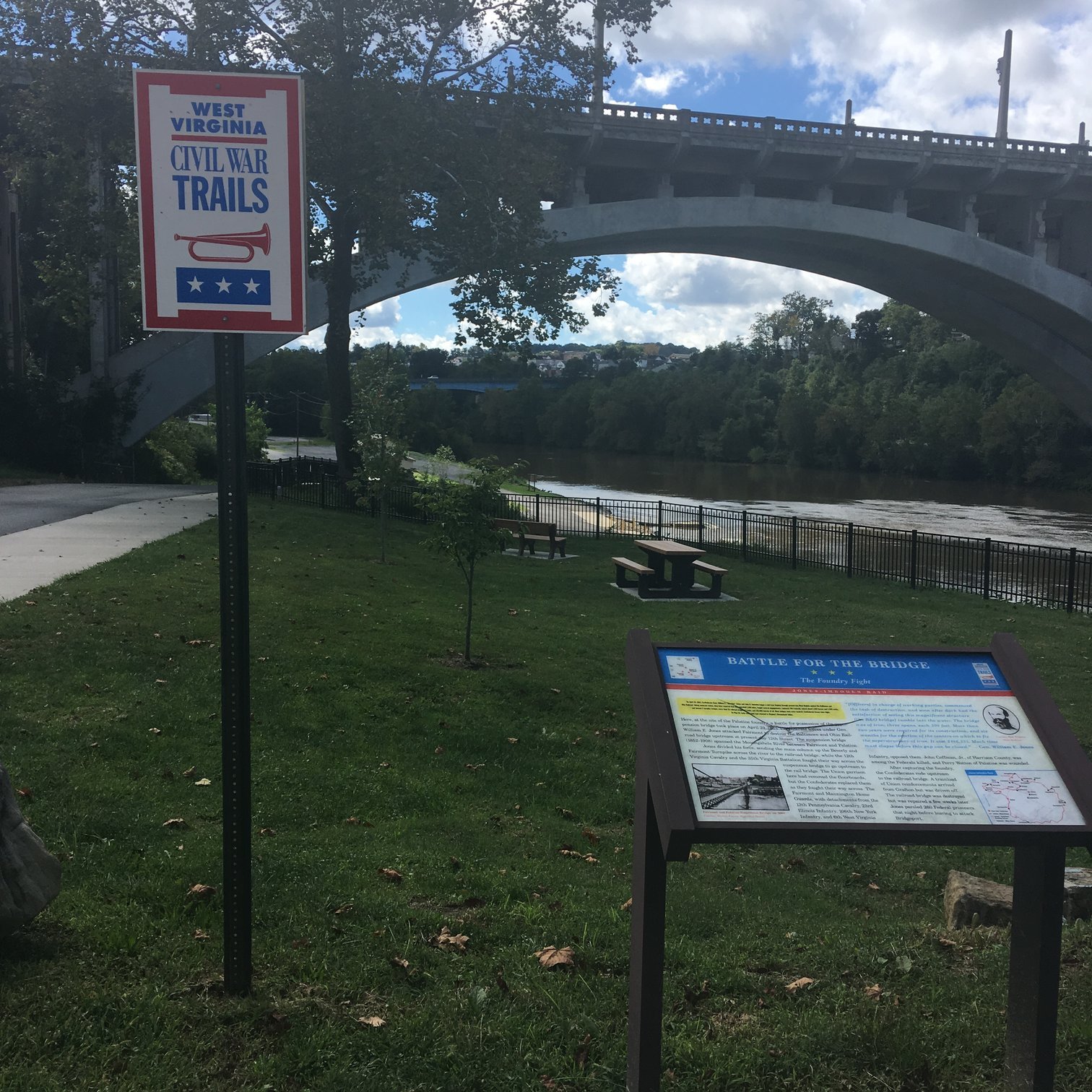 This marker lists the details of the battle and key people involved. This battle did not mark much sustained success in the region. 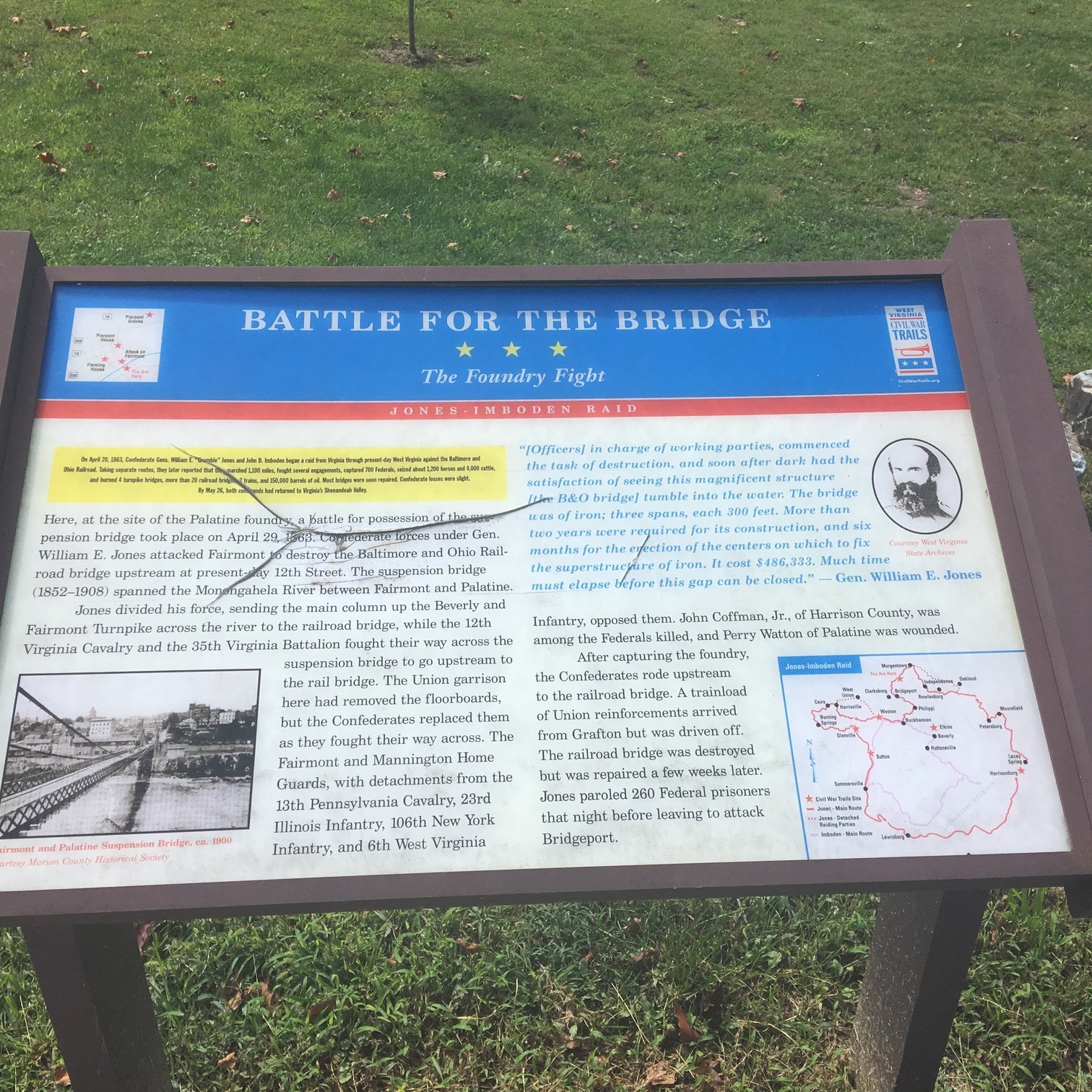 William "Grumble" Jones, one leader of the Jones-Imboden Raid 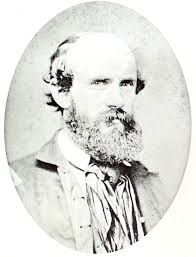 The Battle of the Bridge took place on April 29th, 1863 between Confederate forces led by William “Grumble” Jones and John D. Imboden. It was part of the larger Jones-Imboden Raid that stretched through Virginia and what is know known as West Virginia. The raid was against the Baltimore and Ohio Railroad which was being used to supply the Union. They planned on disrupting this and also weaken the control of the federal government in the area. It lasted over four weeks and they covered over 700 miles during the raid.

The Confederate plan of the raid was originally set up to bring down what was perceived as the most crucial point on the Baltimore Ohio Railroad at Rowelsburg in Preston County. Imobden and Jones though had other ideas. They saw this attack as an opportunity to go in to the western part of Virginia as liberator of Yankee Oppression and hoped to raise up support, men, horses and cattle for the army. Originally General Jones army was to be a diversion for Imoboden’s forces, but Jones argued that his men were better prepared for the battles ahead and they became the main force. With that settled the raid began on April 20th, 1863 and they were home by May 25th.  The Battle for the Bridge was just one of multiple engagements during this raid.

The battle occurred on April 29th, 1863 and involved Jones splitting his forces up. He sent the main force up the Beverly and Fairmont Turnpike and across the river to the bridge and had part of his forces fight their way across the suspension bridge that spanned the Monongahela river from Fairmont to Palatine. The Wheeling Daily Intelligencer from May 5, 1863 gave the most detailed account of this battle. The forces near the suspension bridge had managed to hold off the Confederate forces by taking shelter in a Foundry and firing from the windows upon the Rebels. The Rebels superior numbers proved too much and after a few hours of fighting they were able to force their way across the bridge. The first battle for a bridge that day had been successful.

Once across they worked there way down to the railroad bridge and were able to help secure the bridge while slowly surrounding the Union forces and eventually forcing their surrender. They then managed to fend off a train of reinforcements from Grafton and eventually destroy the railroad bridge.  Jones had thought it would take a while before they were able to repair it. Baltimore and Ohio Railroad had other plans though and knew that their bridges were prime targets. They had materials and staff nearby ready to replace any bridges that were lost. This one was back up and running in several weeks.

After the battle Jones paroled any prisoners he had and commended them for their bravery against a superior force.  before leaving for Bridgeport and then Buckhannon where he met up with Imboden where they continued towards Weston and finally Burning Springs. Burning Springs was a large oil producing facility. They set fire to the oil, tanks, engines, houses and boats. The boats did end up exploding which sent burning oil down the Little Kanawha River. This was noted as one of his biggest successes for the damage it caused to the Unions infrastructure.