Dudley Street Station is a bus station located in Dudley Square within the neighbourhood of Roxbury in Boston, Massachusetts. It is one many stops in the Massachusetts Bay Transportation Authority (MBTA) network. Opened in 1901 as a station for the Boston Elevated Railway Mail Line. As one of the first transit stations in the Boston Metro Area, Dudley was instrumental in moving large portions of the Boston population from South Boston, fueling the city's growth in the 20th century. It is still a functioning stop for two silver line bus routes and 15 local bus routes and services over 30,000 passengers per day.

Historical photograph of Dudley Street Station, east loop and platform. Photograph taken May 24, 1910 but photographer is unknown. Part of the "Arts in Transit" collection at the Boston Public Library. Courtesy Creative Commons. 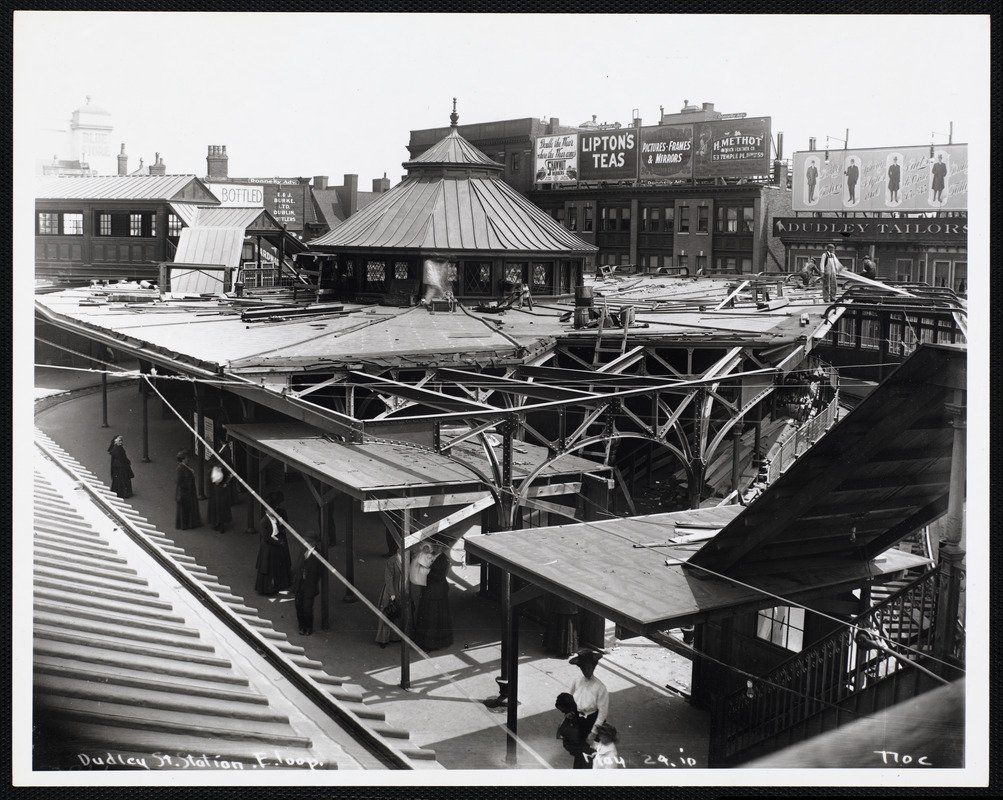 Postcard of Dudley Street Station. Note all of the signs on the righthand side indicating different stores. Exact date and artist are unknown but in the "Arts in Transit" collection at the Boston Public Library. Courtesy Creative Commons 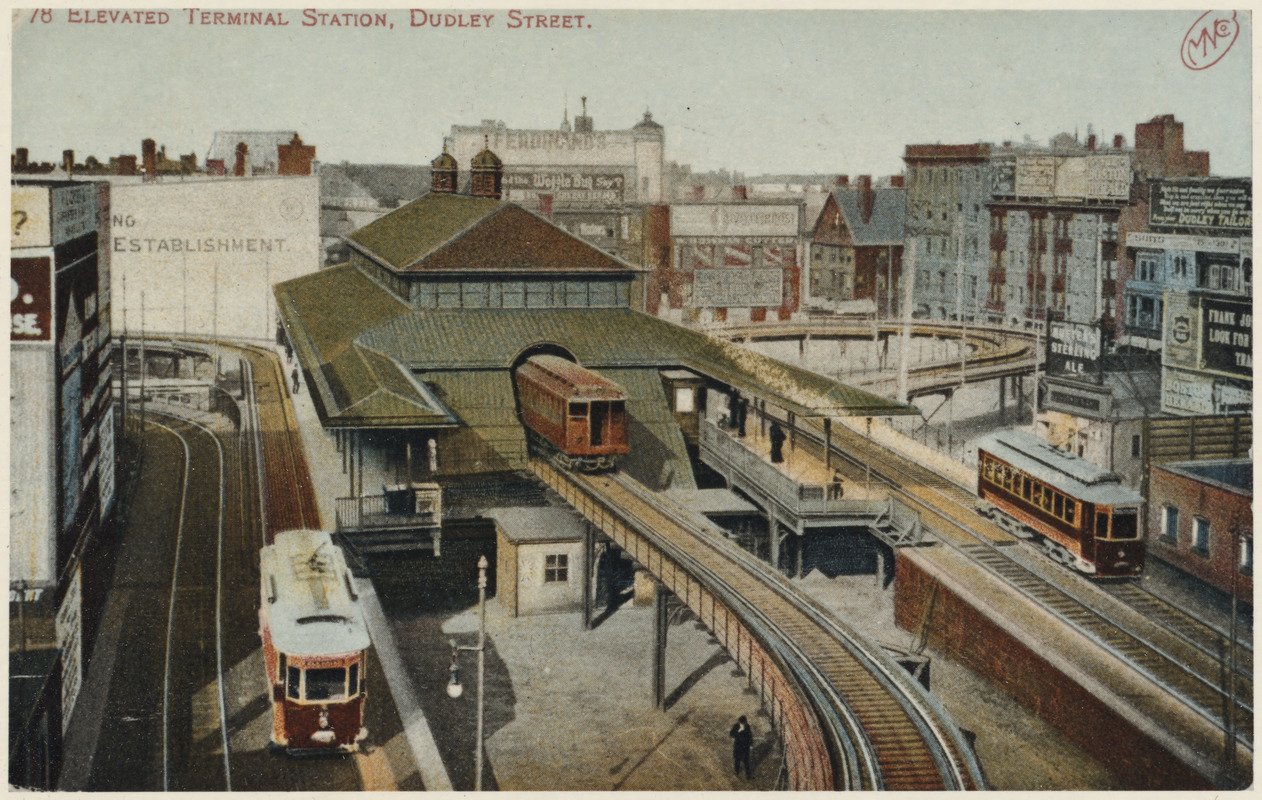 1920s drawing of Ferdinand's Blue Store and its annex. Note the sign that reads 'Dudley St Terminal' and the one reading 'Annex' which connected the station and the store. Exact origins unknown but Courtesy Creative Commons. 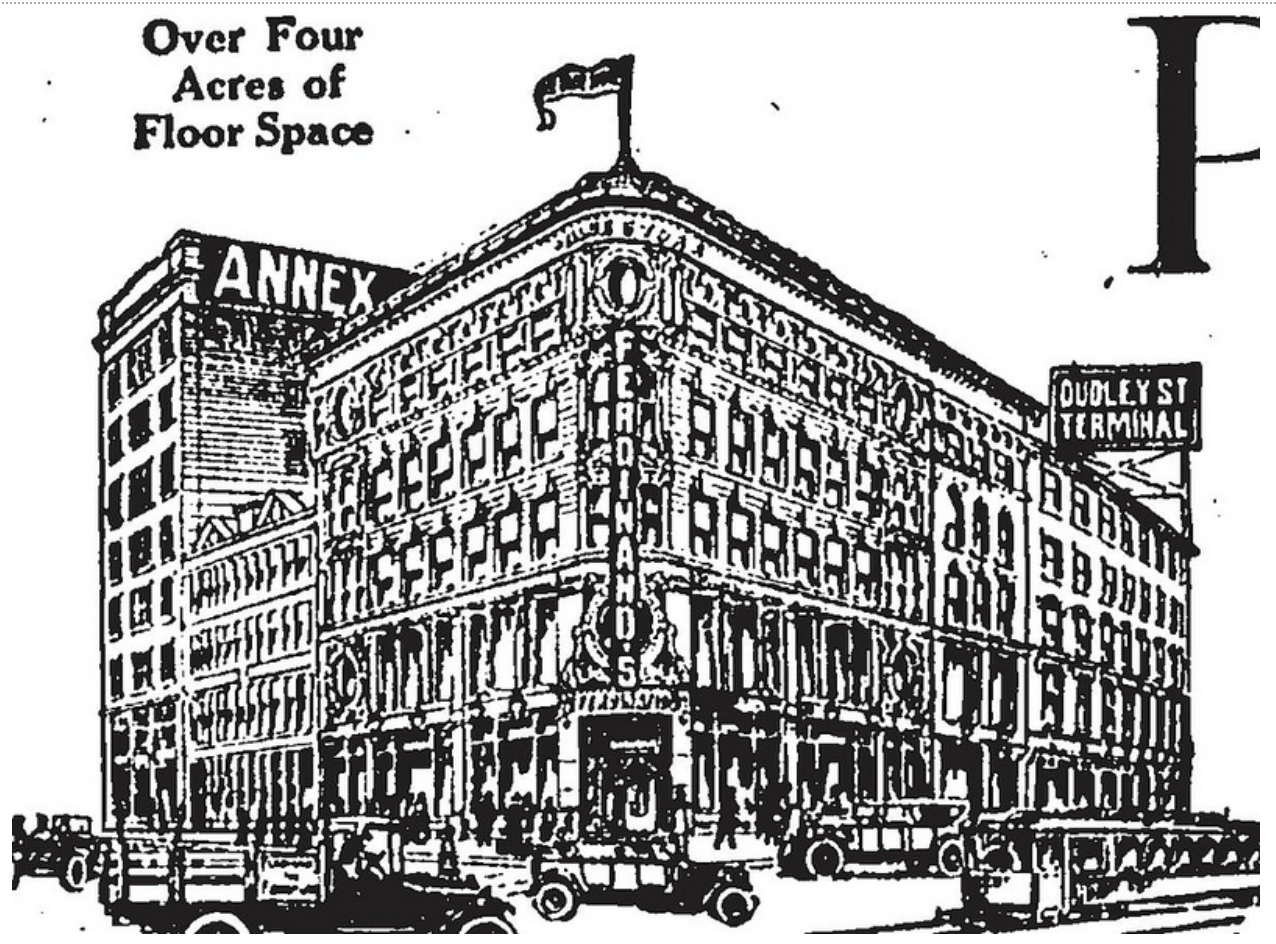 The current appearance of Dudley Station. The photo was taken by Tim Pierce on June 1, 2011. 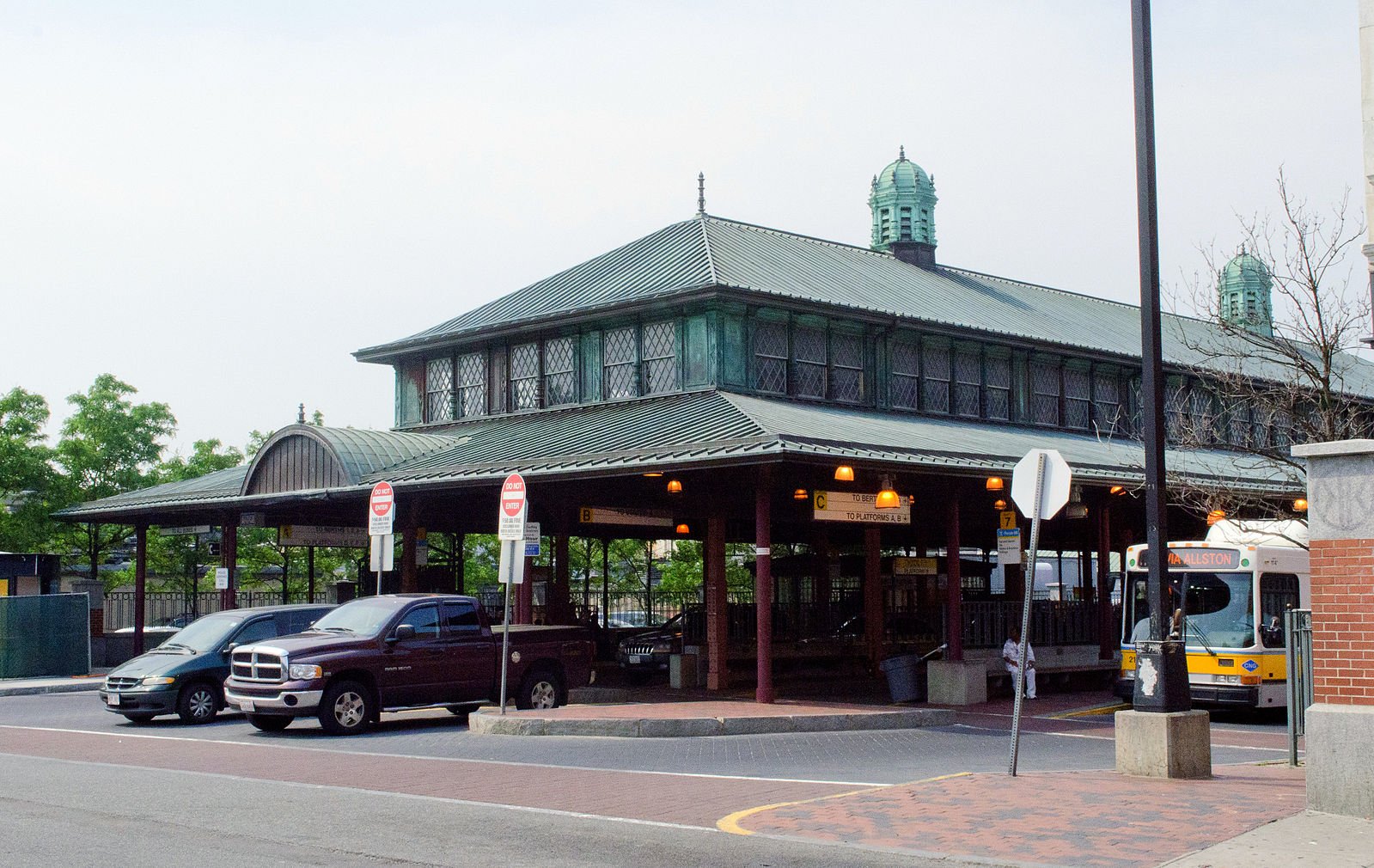 Within Boston’s neighbourhood of Roxbury, there are two streets Washington street and Dudley street which at their junction create Dudley Square. Within this square, there is an active bus terminal (known as Dudley Street Station, Dudley Terminal, or Dudley). Both Dudley Square and the terminal were named after Governor Joseph Dudley, governor of the province of Massachusetts Bay Colony from 1702 - 1715.[1]

During the 17th and 18th century, the neighbourhood of Roxbury was the only land entrance to Boston - the two were connected by a small sliver of land called ‘the Neck.’ In the subsequent 18th and 19th centuries, Roxbury experienced significant growth and development because of its accessibility via horse-drawn omnibus - the population tripled in the 19th century.[2]

In 1901, this area went through a large reconstruction process including the addition of the elevated railway, the ‘Boston El'. Dudley station was the southernmost terminus built. The original station was designed by Alexander Wadsworth Longfellow, a renowned architect at the time.[3] The building he designed is still used today.

In the early to mid 20th century, Dudley Square became one of the most important squares in the area.In part, due to all of the large department stores that opened in this neighbourhood. The most important was Ferdinand’s blue store, a department store that specialised in furniture. Ferdinand’s opened next to the station in 1895 and by the 1920’s had added a massive expansion which included an annex that linked the original building and Dudley Station, thus showing us the importance of the station to the surrounding stores.[4]

Dudley Square's rise during this time was directly caused by its accessibility via public transportation (ten streetcar lines and an elevated railway) during a time when cars were only owned by a small portion of Boston residents.  Dudley Station’s importance as an access point to streetcars continued until 1952 when all but one remaining trolley lines were replaced with buses.  The remaining trolley line was removed in 1954 and all trolley-lines in the Boston metro area were removed by 1960.[5]

Dudley Squares significance in the Boston transit system continued to lessen in 1970 when the city announced plans to build two highways, the Southwest Expressway and the Inner Belt, in response to the increasing popularity of owning and driving cars. These highways were planned to be only .2 miles away from the station. With this planned construction, many large plots of land were demolished to clear the way for upcoming construction leaving much of the once vibrant neighbourhood derelict. Traditional retailers in the area, such as Ferdinand's Blue Store, closed around the time.[5]

Today, although much of the building has been slowly redone and revamped much of the station is the same as the original Elevated railway. Including a small ticket booth which now houses vending machines and Charlie-Ticket kiosks and the original switching tower still stands. It services two silver line bus routes and 15 local bus routes and services over 30,000 passengers per day. [6] Although the station has remained similar much of the neighbourhood is actively changing: since 2012, the Boston redevelopment authority has built a $115 million office and retail space in Dudley square which encompassed the old Ferdinand’s furniture buildings and the city made the neighbourhood the headquarters for the Boston Public schools.[7] It has also named the neighbourhood, including the station, a historical district.